If you keep track of environmental issues in the Lowcountry, you probably know of Beaufort County’s ban on single-use plastic bags. 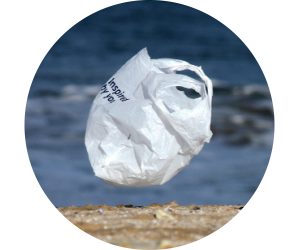 Plastic bags cause cause many problems in our communities and in our ecosystems. Hopefully, with the ban there will be less bags floating on the waterways, less bags removed from the intestinal tracts of sea turtles, less bags snagged by oyster reefs and those that are just litter.

Beaufort County’s ban is on single-use plastic bags—the kind you get at the checkout counter. The County has not suggested banning all plastics.

Single-use, plastic bags catch wind and travel great distances. When they end up over the marinesettle on the surface of the ocean and submerge, they resemble jellyfish, a major food source for leatherback sea turtles.

During 2017 & 2018 Planning Commission meetings and County Council meetings—with and without public comment—a ban on plastic bags was received overwhelming support from the community.

A survey conducted by the Hilton Head Island-Bluffton Chamber of Commerce also conveyed the majority opinion that we could live without the single-use plastic bag.

In coastal South Carolina, the salt marsh estuary pervades our Lowcountry for miles inland. The majority of residents believed it was necessary to implement policies and protect our marshes. With the change, Beaufort County hopes that only Spanish moss is hanging from our trees—not plastic bags.

Isle of Palms and, later, Folly Beach have already initiated a ban on plastic bags and look like rock stars. They are trailblazers and have been successful with the backing of communities that value the unique Lowcountry ecosystem. Folly Beach took an extra leap and banned Styrofoam and balloons on their beaches, as well. This is an example of proactive citizens working to solve a problem in their community with real results.