“Dad,” he said with intentionality in his voice, “where did that fish come from?”

I turned to see my son looking up at a trophy fish on the wall of his grandfather’s workshop. My chest puffed out a little bit as I cheerfully responded that I had been the one who had caught the fish. His eyes got big and he smiled broadly. “No way, really?” I walked over placing my hand on his shoulders, drawing the memory of that day from the depths of my mind. “Yep,” I said proudly, “matter of fact I wasn’t much older than you.” He continued to stare up in wonder.

“Wow,” he said after a few moments.

“How did you know how to get him?” I lifted him up to get a closer look. “Well,” I said, “your grandfather taught me.” He didn’t speak for a moment but I could tell his mind was racing. Finally, as I was putting him down, he muttered what every father who loves to fish longs to hear a child say, “Can you teach me too, Dad?”

We didn’t need to make a trip to the local tackle and bait shop. There was adequate equipment on hand in the workshop for a first lesson. However, I rationalized, to not make the trip would be breaking the first rule I was taught, which, of course, was that one can never have enough fishing tackle. Off we went. He dutifully walked by my side up and down each aisle. “Dad, what’s that for,” he’d ask pointing at a brightly colored cork. “Son, that’s a trout rig,” I would say, or “that’s a flounder rig.” This went on as we picked up a few essentials until we came to a section that seized all of his attention. He stopped in his tracks and pulled hard on my sleeve.

“Dad,” he breathed as if being squeezed, pointing, slack-jawed at a massive hook and weight dangling from a display.

“What in the world is that supposed to catch?” I lifted the large hook and weight from the display and stretched it out before him “This,” I said with great dramatic effect, “is for sharks.” His eyes bugged out. “Whoa, are we going to catch any of those?” Being an inshore traditionalist, I quickly stated, “Our aim is to catch trout and redtails.” He looked at me funny and shrugged “Oh, okay” as if to say “dad, don’t be such a fuddy-duddy.” 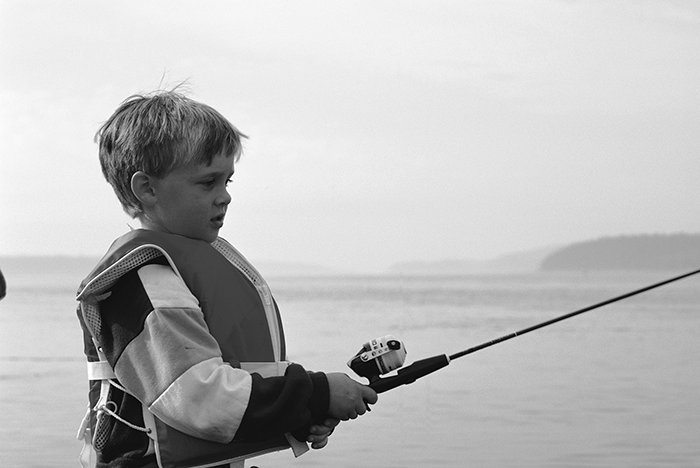 It was a windy afternoon, the sun was blazing hot overhead and the tide was quickly approaching its highest peak in the marsh grass. In other words, it was a terrible tide for trout and reds. To make matters worse, I had no fresh bait but was relying solely on frozen shrimp. It was a perfect storm for getting skunked, which in my family and general fishing vernacular means you aren’t catching fish. Nevertheless, my son wanted to learn to fish and, dag-gummit, he was going to learn to catch what I considered to be the best. The boat turned over with a thunderous roar and off we went to the furthest point upriver I could navigate to try and beat the tide.

Now, in the wind and tide with only a five-year-old shipmate, we were not able to secure the most desirable of spots. Still, I convinced myself we were within casting range of a decent high water fishing hole. We clumsily anchored and prepared ourselves to fish. “Son,” I said making a long cast to the grass, “let’s sing a time honored tune.

My hope was that if we could catch a fish he would be hooked for life.

“Fishy, Fishy in the brook,” I sang out loud as he looked on in confused amazement, “come and bite my little hook.” After a while with no action he poked me and said, “Can I cast?” I handed him my rod. “Hold this.” He took it and repeated his question, “Can I cast my own rod?” Finally, after another long stretch with no bites, I relented. I handed him a rod and reel and quickly realized my error. It was a spin rod. His first cast created a dozen yards of backlash and his reverse reel created dozens more. My haste to give him an experience failed to consider his skill level. It created a mess for me and disappointment for him. I sat down to undo the tangle and handed him my pole with the explicit instructions to “watch the cork.”

Morale can quickly plummet on a hot afternoon, out on the water, with no shade and no fish for even the most seasoned veteran. For a five-year-old it’s brutal punishment. “Dad,” he’d say, “something is on the line, it’s pulling.” I would look up from his tangled reel and proclaim, “No son, it’s just the tide.”

He would then repeat the refrain, “Dad, there is definitely something on the line, it’s a fish I know it.”

This exact conversation went around and around for at least 20 minutes. Frustrated and hot, I stood up and took the rod from his hands. “There is nothing on that line,” I said sternly as I reeled it in. “Yes there is dad” was his quite reply. Sure enough I reeled in a greedy and very stubborn blue crab all the way to the boat. I netted him for effect. “Son,” I said humbly, “you were right. We didn’t get skunked. Let’s go home.”

It was the most enthusiastic I had seen him since he spotted the shark rig. Firmly back on dry land, I assessed the day. There was the high of having my son ask me to teach him how to fish to the low of me getting in the way of the experience in every way possible. No fish, no fun and no good memory for anyone. That night as I tucked him in I asked him for another chance. “Son,” I said, “fishing is so much better than what you experienced today. You think you can give your daddy another shot?” He winked at me. That was affirmation enough for me to begin to properly prepare for the next day.

I waited until everyone else had left the breakfast table.

“Big guy,” I said, “you want to try again?” He looked at me with a strong degree of hesitancy and rightly so. I had taken a simple request and turned it into a miserable experience. “Buddy,” I humbly offered, “today will be much different.” He looked at me cautiously. “No heat and no orders?” I sat down and patted him on the head “only fun.” I had gotten up early to ensure we had what we needed to succeed. We gathered two prepared poles, a shrimp net and headed to the river. It was a gorgeous May River morning.

The sky was blue with small cotton ball clouds. The river was low and exposed in all her glory. I tossed the cast net, much to his amazement, over a school of finger mullet. “Bait!” he exclaimed excitedly as if this alone would suffice and atone for yesterdays blah experience. He furiously moved about the dock picking up the flopping bait-fish carefully dropping them in a bucket. “This is awesome,” he exclaimed. “More to come,” I cautioned. “This is only the beginning.” 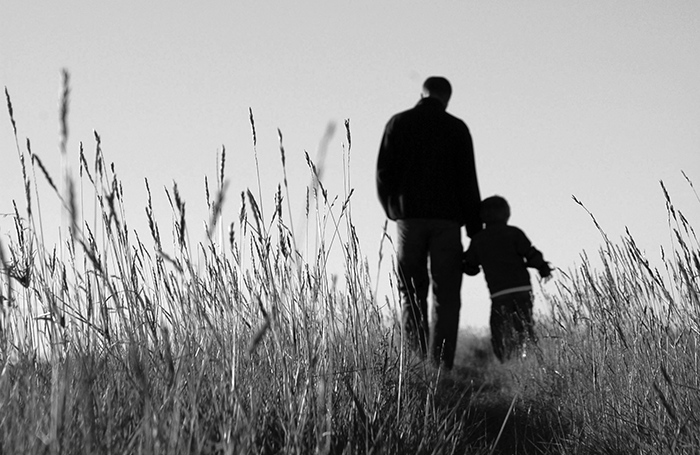 We sat leg-to-leg on the edge of the floating dock and cast from ‘age appropriate reels’ out into the mighty May.

My soul relaxed watching him study the water. I knew this was sure to produce something. It wasn’t five minutes later that my son called out, “I feel a tug.” Resisting the urge to teach I simply told him to land the fish. He pumped at the reel. His face contorted with each strained turn of the handle. I realized he might actually have something more than a crab. “Go, Go!” I encouraged as his rod bent with the pull of an actual fish. What emerged from the brackish waters was a (very) small black-tip shark. He pulled it, with my assistance, onto the dock and sat down with a thud and stared. As soon as he processed what happened he took off like a firecracker to the house to tell everyone.

I shook my head knowingly. Of course his first catch would be a shark.

Within a few moments a small crowd gathered to watch me release his catch back to the river.

“Dad,” he said like a seasoned veteran, “that was awesome. We have to do this all the time.” He was hooked. Everyone, my son included, soon sprinted off to other things. I stowed the tackle my dad put his arm around me. “Reminds me of some good times son,” Pop said as he hugged me, “every bit of these past two days. I remember a similar start. I’d take you out and you’d sleep on the bench of the boat under the canopy.” I put my arm around his shoulder, “Pop, those times we fished this river and others are the best memories of my life.” I kissed his cheek. “I pray my son can have the same joy we’ve shared out on the water.” He looked back at me square in the eyes, “You made a good start today son. Good start.”