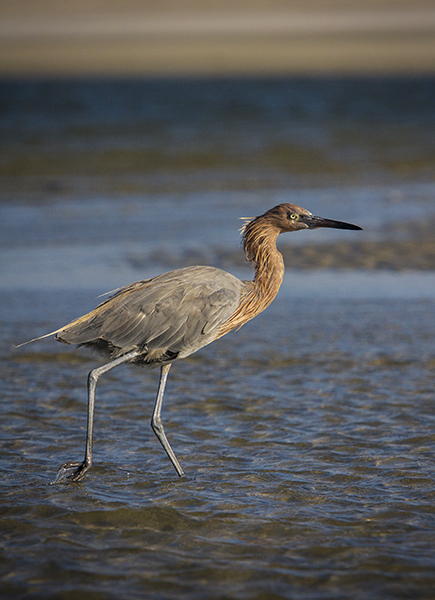 This year, on Thursday, Dec. 15, 2016, team leaders will organize several small groups to count and identify species of birds seen and heard within a 15-mile radius around Spanish Wells. From Palmetto Bluff to Colleton River Plantation, Daufuskie to Hilton Head Islands and the waterways in between, experienced birding teams that include photographers and scribes will scour their designated areas by land and sea to document avian wildlife. The Sun City (Okatie) Bird Count takes place the following day on Friday, Dec. 16, 2016.

Information collected during these annual events is submitted for the 117th Audubon Christmas Bird Count, an international effort and the longest running Citizen Science survey in the world. This survey provides critical data on bird population trends.

Hurricane Matthew brought down trees that had served as roosts and nesting habitat.

But, according to experts, it also stirred things up a bit—in a good way! The birds’ food supply is now more abundant and the birds can’t eat those mosquitos fast enough!

Additionally, Matthew’s devastation opened up previously dark areas to sunlight. New plants will grow in these places, adding more variety. Flooding from the storm provided new foraging grounds for wading birds, which promotes food source diversity. It appears the birds will recover much faster than we will.

The Christmas Bird Count takes place two months after the hurricane. It will be interesting to see if there is a shift in bird species in count areas compared to previous years. The 100-mph winds rearranged their habitat, so a chance for a unique sighting may arise! 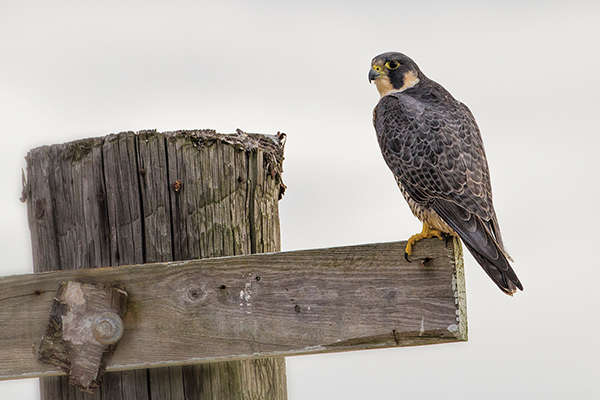 The Peregrine Falcon (Falco peregrinus) is one of the fastest birds on earth with a top speed of 200 mph in a “power dive.” The Peregrine Falcon can knock prey out of the sky in a vertical descent, fly very close to the ground for a sneak attack, and pursue its prey in level flight. Its name comes from the Latin word peregrinus meaning foreigner or traveler. Its maneuvering ability makes it the perfect namesake for a spaceship that travels at warp speed!

The cause was DDT (dichlorodiphenyltrichloroethane), an insecticide which had bioaccumulated in prey causing their egg shells to be thin and break. DDT was banned in 1972 and gradually phased out. Cornell University instituted a captive breeding program to help save the population. The Peregrine Falcon was delisted in August of 1999, after 26 years on the Endangered Species List. 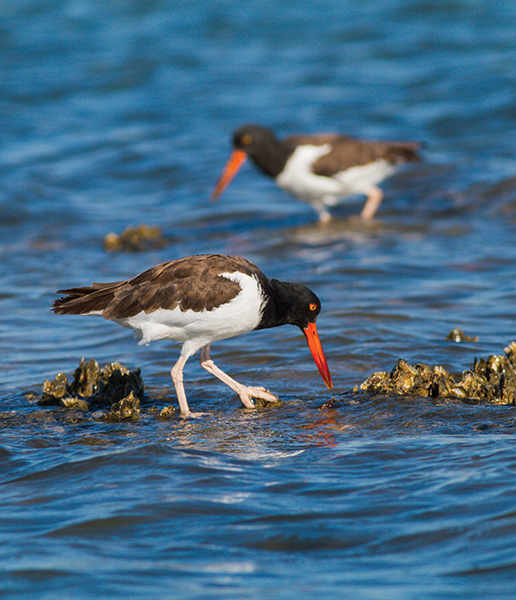 The American Oystercatcher is hard to miss with its bright red/orange beak, pitch-black head, yellow eyes, white belly and brown back. However, it is a shy bird and will usually hide behind the oyster reef where it nests on the ground near the high marsh. It lays two to four eggs at a time, very close to the high tide line, and a full moon tide may wash over the nests. Hatchlings are mobile within 24 hours.

This bird is rarely seen inland, even in the winter. It feeds almost exclusively on bivalves like oysters, mussels and clams. How fast do you think the American Oystercatcher has to run to catch that oyster? Not so much…it “sneaks up” on the oyster before it shuts tight, just as the tide is ebbing, and wedges its red bill between the shells, clips the adductor muscle holding them together, then eats the soft-bodied bivalve right out of the shell. It should be called the “American Oystershucker.”

I’m sure it doesn’t happen often, but it has been documented that the oyster may “fight back” by clamping down on the Oystercatcher’s bill before the muscle is severed, and it can hold the bird hostage until the tide comes in…ouch! 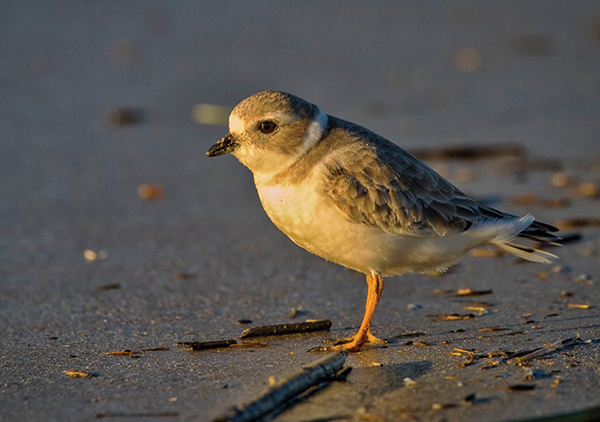 The Piping Plover nests on the beach and is the same color as the sand. It has a white belly, a black band between the eyes and a black band on its chest that is broken in the middle. Yellow legs carry a six-inch, two-ounce body swiftly across the sand to defend a nest that is situated, of course, on a sandy beach inundated with people, dogs, and beach equipment.

The Piping Plover faces a losing battle—nesting habitat is becoming scarce and, sadly, dangerous for this shore bird. The Atlantic Coast population is listed as a threatened species under the Endangered Species Act. The Piping Plover almost disappeared in the 1800s due to the popular, feather-adorned millinery style of that era, but this bird has made a comeback. There are approximately 2,000 nesting pairs on Atlantic shores. The Town of Hilton Head monitors Piping Plovers on the North end of the Island and you may notice signs indicating areas to avoid for their protection. 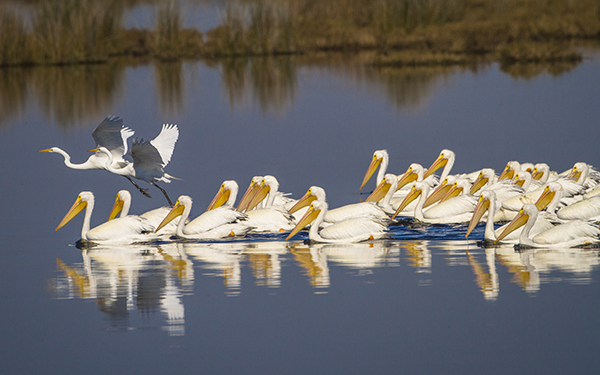 The American White Pelican is pure white with black flight feathers on the trailing edge of the wings. Larger than the Brown Pelican, they do not plunge into the water for food, but simply float and dive periodically. Flocks of these pelicans cooperate to corral fish and are effective thieves—they have been known to steal fish from Cormorants. If they get overheated, they cool off by facing away from the sun and fluttering their bill pouches, which contain many blood vessels allowing body heat to escape.

White Pelicans are shy and very sensitive to human disturbance. They overwinter (migrate) to coastal areas, but spend most of their time inland on freshwater lakes. Their populations are increasing, but sighting one of these birds is a rare event in the Lowcountry, as they generally visit only during winter and keep their distance. I have seen a flock in the May River just one time. 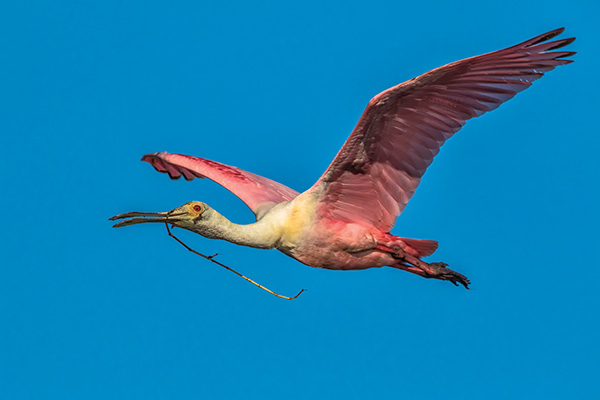 The Roseate Spoonbill is a pink bird with a bald, featherless head and a flat, spoon-shaped bill. I had a customer on the boat who swore they had seen a flamingo in the May River!

So, who wanted a PINK feather in their hat in the 1800s? Everyone, of course. This bird was almost completely wiped out in the United States by plume hunters before bouncing back a century later in Florida and Texas.

In the Lowcountry, it is rare to see a flock of these birds feeding amongst the Ibis and Wood Storks. Related to the Ibis, it similarly uses an odd-shaped bill to sift around in the mud for food. Sensors on the bill alert the bird to prey by sensing vibrations in the mud. Their pink plumage is a result of eating certain marine invertebrates and the color will fade over time if plucked. (I wonder if those ladies wanted their money back when the pink feathers on their hat turned white.)

The Roseate Spoonbill may visit South Carolina during the breeding season before heading back to tropical areas for winter. This northern migration has scientists wondering if warming global climates are encouraging them to move up the coast…or maybe they just like it here. As we all know, everyone who visits moves here eventually! 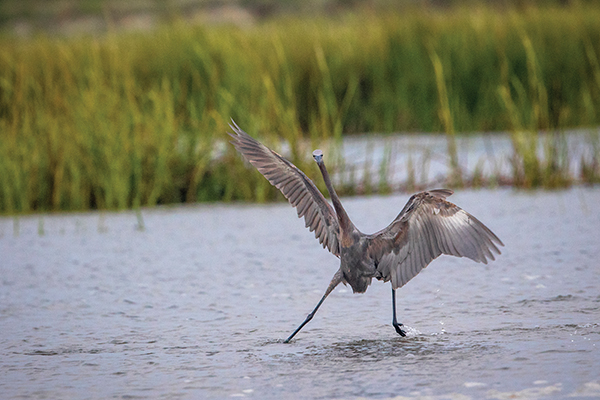 Again with the hats! The Reddish Egret was almost completely wiped out in plume trade for hat decoration in the late 1800s. Today, there are approximately 2,000 mating pairs in the United States. They reside primarily on the coasts of Florida and the Gulf of Mexico.

I can honestly say I have never seen one, but they can be found in the South Carolina salt marsh after breeding season. The Reddish Egret has a pink bill with a black tip, a reddish-brown neck and a dark grey body, which is referred to as the “dark morph version.” However, it may also be completely white and is aptly named…the white morph version! (I wonder how many white morphs I have seen and thought they were Great Egrets.)

Another way to distinguish the species is by feeding habits—instead of the slow movements of the Great Egret, this bird charges, splashes and spins as it chases its prey. The Reddish Egret is on the ICUN (International Union for Conservation of Nature) watch list as Near Threatened.