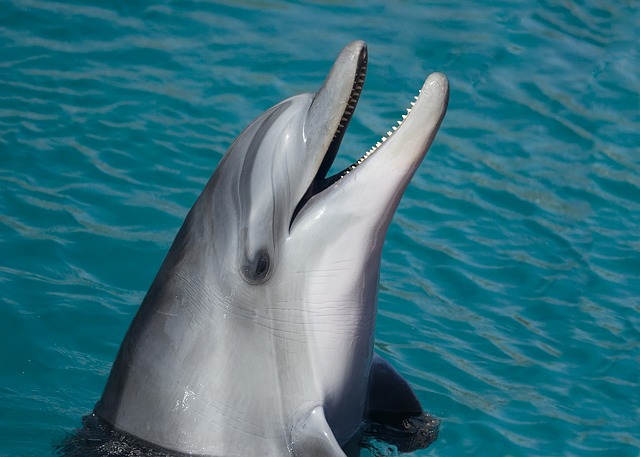 The local population increases significantly in the summer months, thanks to the thriving food supply provided by the salt marsh estuary. Dolphins are identified by their dorsal fin, which is as unique as a human fingerprint. 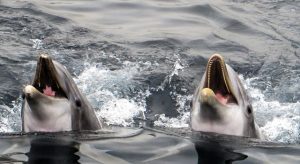 On TV, Flipper comes to the side of the boat with his mouth wide open to announce an emergency. He must get Sandy’s attention to find Porter, Sandy’s park ranger father, to save the individual in distress. It is a little-known fact that sound does not come out of a dolphin’s mouth at all! All sounds are emitted through the blowhole, the dolphin’s nose. The sound you recognize as Flipper happens to be a kookaburra bird that was Hollywood’s answer to Flipper’s vocalization. The dolphin on film was actually begging for food, not speaking. 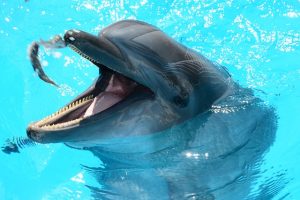 Dolphins swallow their food whole and are very picky about how they eat a fish. I must mention that it is illegal to feed dolphins as of 1992, when the Marine Mammal Protection Act (1972) was amended. But, from childhood experience, I can definitely say that Dolly, my pet dolphin, refused to eat her mullet tail-first. Dolphin understand that a fish goes down more smoothly if eaten head-first.

All mammals have hair and a dolphin is a marine mammal. Have you seen the hair on a dolphin? Under the pectoral fins? Just kidding! Dolphins do not have armpit hair, but they are born with rostral hairs—one hair growing out of each of several follicles across the top of the rostrum (snout)—like a mustache. The calf loses this hair and it doesn’t grow back. Since hair is not a source of warmth in the water, it is replaced with blubber in marine mammals. 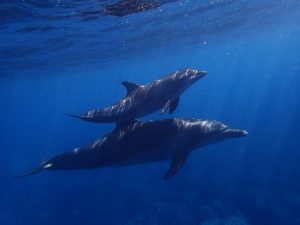 Dolphins feed their babies milk. The female dolphin has nipples that are tucked into two slits on her belly. The baby latches on and when she is done, the baby is done. There is no suckling. She weans him after 18 months.

A dolphin’s brain has two asymmetrical lobes (one side is larger than the other). These lobes are capable of acting independently, which allows one side to sleep while the other side keeps the dolphin surfacing for air. Then the process switches to the other side. Have you ever seen a dolphin sleepwalking?

Dolphins do not drink salt water. A dolphin cannot desalinate seawater. No mammal drinks salt water…on purpose. A fish can drink saltwater and excrete the salt in its urine and gills, leaving fresh water inside. As long as dolphins eat fish, they stay hydrated.

Besides humans and primates, dolphins are the only other species that mate for recreation. Regardless of the season, this activity can be seen in our local waterways. I call it “Follow the Leader” on school field trips aboard Spartina. If you know what to look for, pink bellies and rolling activity become obvious. Babies are born in the spring. Dolphins are promiscuous and the females are single mothers, with very little paternal contact (if the father is even known). The strongest dolphin bond is male-male friendship, second only to the mother-calf bond.

Dolphins have ears. On either side of the dolphin’s head, there is a small pinhole that is a vestigial ear opening, now plugged with flesh. Dolphins receive sound through the water, vibrating their lower jaw which is connected by a bony attachment to an ear complex that still contains the incus, malleus, and stapes—just like ours. 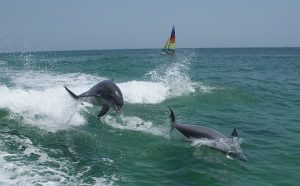 9. Dolphins Just Want to Have Fun

Dolphins entertain each other with natural toys. If I had not seen it with my own eyes, I might not believe it. Once, I was giving a tour in Calibogue Sound and the moon jellies were thick in the water. I saw a dolphin pushing one through the water and passing it over to another dolphin, as if a game of soccer were in progress.

Dolphins can focus both in and out of water. Humans can only focus in air, which is why it is blurry when we open our eyes in the pool, unless we put on a scuba mask. Although dolphins have excellent vision, they cannot see in the dark! Our Lowcountry waterways are teaming with life, and this larval marine life blocks the light. A dolphin will often bring his eyes out of the water when he comes to the surface to breathe, so he can scan the area.