This beautiful park offers a glimpse into three centuries of history. The iconic, tree-lined entrance to Wormsloe Historic Site in Savannah, which graced the cover of Gregg Allman’s “Low Country Blues” album, evokes a different era, turning back the hands of time to colonial Georgia. Drive down this majestic rural avenue, lined on either side by more than 400 stately live oak trees, to explore one of the South’s most scenic historic treasures.

Wormsloe includes the only standing architectural remnant in Savannah from the founding of Georgia.

The former home and plantation of Noble Jones, one of the original colonists who arrived in Savannah with General James Oglethorpe in 1733, Wormsloe offers a glimpse into the lives of Georgia’s earliest European settlers. The Jones’ house was originally constructed of “tabby,” a mixture of sand, water, lime and oyster shells. Many of the oyster shells used to build the house came from shell mounds left behind from ancient Native American settlements on the site thousands of years earlier.

The tabby ruins of the original Jones’ house lie nestled within 822 acres of Georgia forest, sheltered by peaceful marshes to the east and the south. When the Jones family lived at Wormsloe in the mid-1700s, their home was strategically fortified by eight-foot-tall tabby walls to protect Jones and his family from Spanish or Indian attack. 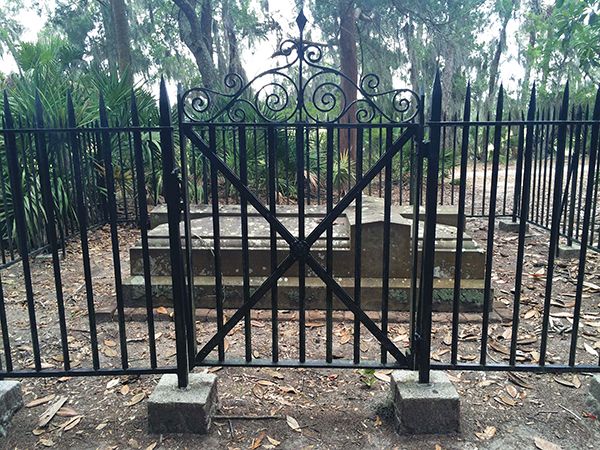 Noble Jones was buried at Wormsloe in 1775, alongside his wife Sarah, and later their youngest son Inigo. In 1875, George Wymberley Jones DeRenne, a descendent of Noble and Sarah Jones, moved Noble’s remains. DeRenne sent the remains to another cemetery. Subsequently, he placed a monument on the site “to save from oblivion the graves of his kindred.”

Wormsloe also features a Colonial Life Area. It represents some of the typical outbuildings on the property. It also offers information about the gardens and crops grown at Wormsloe in the 18th century. A three-mile, dog-friendly nature loop is ideal for hiking and provides spectacular water views.

Located on Skidaway Road on the Isle of Hope in Savannah, Wormsloe is open Monday-Friday 8 a.m.-8 p.m., and Saturday-Sunday 9 a.m.-5 p.m. and located at 7601 Skidaway Rd. For more information, visit gastateparks.org/Wormsloe.