One of the favorite pastimes of Lowcountry residents and visitors is watching dolphins. 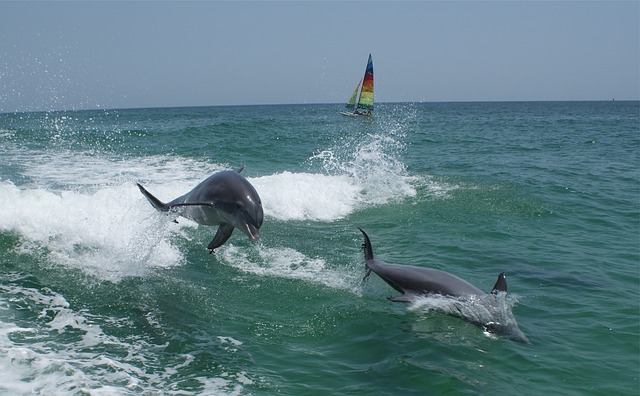 Many people don’t realize, however, that they are actually whale watching. Most of us think of whales as large marine mammals, up to 90 feet long, like the endangered North Atlantic Right Whale. But the dolphins commonly seen in the surrounding waters are true whales. They are members of the group of whales known as Odontoceti, meaning literally “toothed whales.”

The toothed whales are typically the “smaller” whales, and even include the Sperm Whale, which can be as large as a Right Whale. Despite the size differences and the lack or presence of teeth, all whales have certain common characteristics. Of course, the most striking is that they are mammals, and thus have many things in common with humans. For instance, they are warm-blooded, even though they can dive to great depths in the ocean where it is extremely cold. They can accomplish this feat due to the layer of blubber that insulates their bodies. They must also breathe air, which is when most of us have the chance to view them at the water’s surface. Most interesting, however, is that dolphins give birth and nurse their young, like all mammals do.

Despite being mammals, whales have obviously made changes to adapt to their aquatic existence.

Their smooth skin is hairless, which actually aids them in swimming by decreasing the amount of friction created as they move through the water. Due to the lack of hair, all whales have blubber to keep them warm. Their nostrils have evolved to become blowholes situated on the top of the head to make breathing easier. The external ear openings are practically nonexistent. Yet the most striking changes are to the body shape itself.

Whales have a common ancestor that was once terrestrial. In addition to the other changes, their body shape changed drastically. The front limbs became flippers, while the hind limbs disappeared entirely. The tail became the broad, flat fluke used to propel themselves through the water. The general shape of whales is also torpedo-like, which again helps them to move more easily through the water. Even our local dolphins have these characteristics.

The most common dolphin spotted around the Lowcountry is the Atlantic Bottlenose Dolphin (Tursiops truncatus). 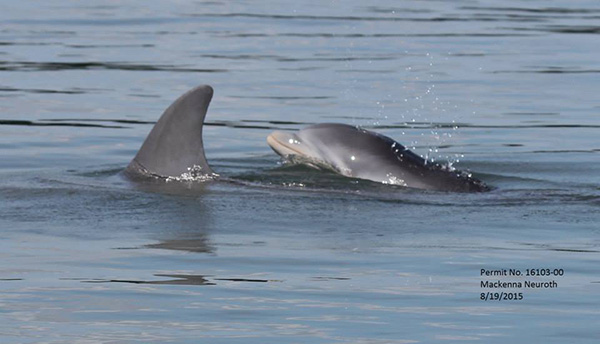 Bottlenose dolphins can be found in temperate tropical waters around the world—as long as the fish, squid, octopus and krill that they feed on are present.

Although these animals sound bulky, anyone who has witnessed a dolphin gracefully leap above the  waves knows how agile they can be. Not only are dolphins incredibly agile, they can also be quite speedy. Dolphins typically cruise at speeds from three to seven miles per hour, but have been clocked at bursts of speed from 30-45 miles per hour—a great way to elude danger, such as sharks, or to catch fish.

In our murky coastal waters, dolphins use echolocation to find fish.

Echolocation works like sonar, with the dolphins emitting a high-pitched noise which then “echoes” back to the animal after it strikes an object. Echolocation in dolphins is much more sophisticated than human sonar. Dolphins can detect the size, shape, texture and density of an object by using echolocation.

Another interesting feeding technique in our regional dolphins is “strand feeding” (see photo above). During low tide, when the salt marsh mud flats are exposed, dolphins working in pairs or small groups will herd a school of fish toward the shore. In a rush of water, the dolphins chase the fish and cause them to panic and jump out of the water and onto the mud. The dolphins will literally strand themselves while rolling to their right side to snatch up the grounded fish.

After feeding, the dolphins slide back down the mud into the water and move along the shore again, possibly repeating this maneuver several times. Strand feeding is a learned behavior among the dolphins from Savannah to Beaufort and, remarkably, does not occur anywhere else in the United States.

Local dolphins are monitored by The Dolphin Project (TDP).

TDP is a trained group of over 300 volunteers who collect population data, such as abundance, residency and distribution. They track dolphins from Port Royal Sound to the border of Georgia to Florida. Due to their efforts, we know that we have approximately 200 year-round resident dolphins around Hilton Head Island. Dolphins can be individually identified by their dorsal fins: each one is as unique as a human fingerprint. Additionally, the data collected by these volunteers is used by scientists and researchers with state and federal agencies, as they continue to institute policies regarding the quality of coastal waters.

Years of study have answered some of the basic questions about dolphins. Yet there are many more questions to be answered, such as, what is the status of dolphins in the ocean? Are their numbers increasing or decreasing? When dolphins strand feed, why do they they always roll to their right side? Why are some dolphins social, while others tend to be more solitary? Do they have territories they defend?

Enjoy a dolphin cruise while in the Lowcountry to observe these graceful, fascinating creatures in their natural habitat.

FACTS about the Atlantic Bottlenose Dolphin: 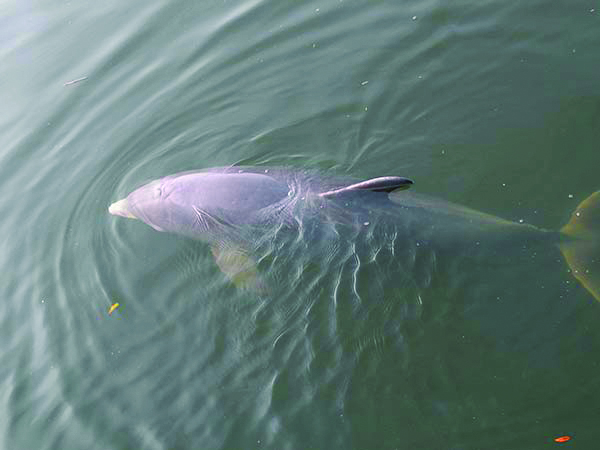