Fishing for Speckled Trout in the Lowcountry 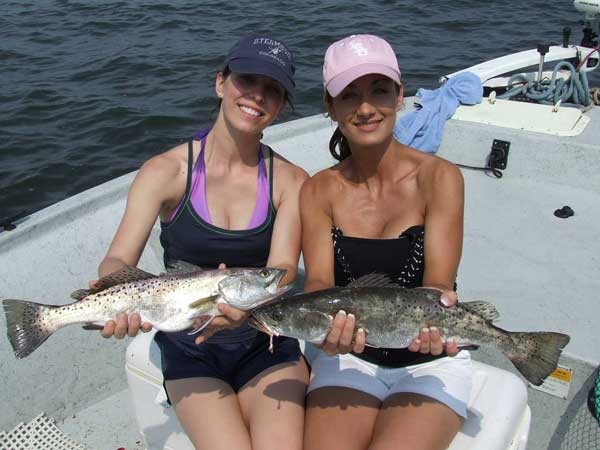 The fluorescent orange cork landed with a splash on the edge of the green spartina grass and promptly disappeared. With a few turns on the Penn Battle spinning reel, Bo had the slack out of the line and the Legion rod bowed against the surge. The reel’s drag purred as the fish took about twenty yards of line upstream and then surfaced, boiling the water in protest.

“Ooh he’s mad!” I remarked just as it took off for another run, this time for deep water. Actually, it was a female — four pounds or so, and bigger than the typical male, this one was full of roe.

Speckled trout are one of the most highly prized game fish here in the Lowcountry.

Their streamlined, silver iridescence with spots is reminiscent of the freshwater trout family, but this shimmering beauty belies their power. These trout sport a pair of fangs at the top of their mouths and their aggression is of a barracuda. There is nothing delicate about the bone-jarring strike of the trout or the determined battle that occurs after hookup. The only delicate thing about this fish (other than its tasty flesh) is its mouth, which makes a light drag mandatory. And while some prefer to fish live bait under corks, trout are caught on many types of artificial lures. One that I have added to my arsenal is the “Trout Trick,” a soft, plastic bait invented by the seasoned Capt. Bob Sanders, who fishes out of Edisto.

Thanks to last year’s mild winter, the trout have been plentiful.

The cooler temperatures of October hold promise of a great season. By now, the numerous “peanuts” caught earlier this summer have been stuffing themselves on the plentiful shrimp. They are larger and ready for catching. As for Bo, he and his party caught many more trout that day. Four of which had “gator” status (four pounds or better). Clear, cooler water and this great fall weather promise some epic speck fishing in the coming months!