Search
HomeBlog ArticleTime To Play: An Outreach to Music Education 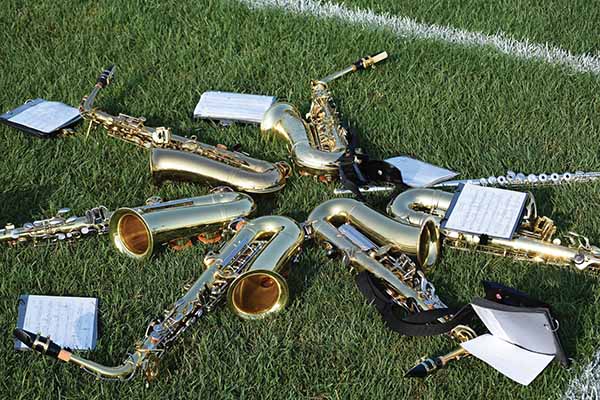 I’ll admit I’ve always been a fan of “chemistry,” but really had a hard time in school. Being the class clown takes time away from listening, studying, etc. But put something in my hand and I can focus.

When I started playing saxophone in fourth grade up in PA, I had no idea what, where or who was gonna happen. The important thing was that the SCHOOL had us kids come to the band room and “try” the trumpet, hit the snare drum.

Had I heard of John Coltrane or Kenny G? Nope. But I had to play the saxophone. Somehow a bandmate of my father‘s donated an alto sax to an 11-year-old Jevon and I began to play in school. Of course, I still drew pictures of the B.C. Rich guitars I saw on MTV during class (when I was supposed to be listening to the teacher), but I now had the sax. Let’s riff!

Does this process happen anymore?

Basketball? Sure, man…you wanna play basketball? Here. Sign up and play. A decent piano costs hundreds of dollars. Drums are not cheap. Where do the instruments come from?

I know—we could get all the golf courses to donate one day’s worth of watering funds and probably buy three schools a full band’s worth of instruments, music and music stands. Then you need a dedicated teacher. And parents willing to help. You also need kids with that fire that the HHHS Marching Seahawks had in 1983. All 18 of us. We actually practiced where M.C. Riley is now—the old McCracken Middle School.

Kim Grant. Oh, and those two skinny kids with the funny names—Jevon and Gavan Daly—ha, ha!

Gavan was an A student (with a flat top haircut back then) and a killer surfer with a lot of focus. Jevon NEEDED that band. I loved it. Yes, I was picked on for the size 42 pants I wore (all we had left in the uniform closet). You should have seen when we got into All County Band and went to Battery Creek in 1985. WOW.

Without music, school life was tricky for me. There are kids all over the U.S. just like that kid I was back in 1983. Kids that have trouble studying or sitting still in class. Kids that want attention. The band was IT for me.

What can we do moving forward for our kids? I honestly don’t know.

Music programs are dwindling nationwide. The Arts are fizzling everywhere, being replaced by website design classes and other classes my son is taking that I cannot even begin to “get.”

Where would guys like me—guys and girls who make a living singing and playing now—be without our band background from school? The pride and confidence I received from that; no one can ever really know how I felt playing in that early Seahawk Band…sitting next to the tubas in the back.

We were BAD. The band played “Word Up,” I mean! Confidence beamed from every one of our faces. The Light!

Hopefully Martin Lesch and the Junior Jazz Association have something up their sleeves. Maybe teachers like Dr. Corley over at Red Cedar here in Bluffton will find a way to spark something. They have a drum corps that marches! Ya never know till ya try.

I hope someone makes some moves. If I can help, gimme a call: (843) 683-BOIL. Ask for the 44-year-old Dad guy who still has that Seahawk Marching Band pride happenin’. Every gig I do is an extension of all those kids I played with. They were some serious players. Thanks to Mr. Smith, too.

That’s where I come from.