Captain Amber, are there sharks in these waters? 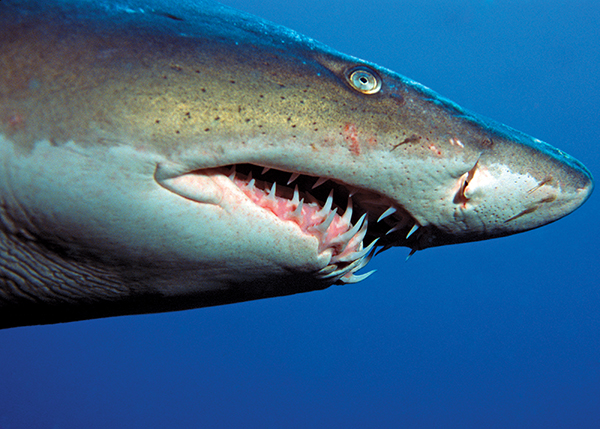 You know, there is a foolproof way to tell if there are sharks in the water, and it works anywhere on the globe. Put your finger in the water and touch it to your tongue. If you taste salt, there are sharks! Every body of saltwater has sharks in it. In South Carolina alone, there are 13 families and 38 species of sharks roaming our waters.

The first thing to know about sharks is that they have evolved over millions of years and are the oldest of fishes. Their common ancestor existed before the dinosaurs, approximately 400 million years ago, and sharks haven’t changed much in 200 million years, since the end of the Cretaceous period. They are perfectly built for their environment and purpose.

Secondly, one of the major differences between sharks and other fish is a skeleton made of cartilage, instead of bone.

All species of shark are in the class Chondrichthyes—cartilaginous fishes. Cartilage is much softer than bone and this adaptation gives the shark an advantage as an apex predator, allowing it more flexibility and maneuverability.

Sharks lack a swim bladder which gives other fish control over their buoyancy. Although cartilage is lighter than bone, sharks still sink, so they must move constantly to stay off the ocean floor. Some sharks, but not all, must swim their entire lives so water runs over their gills and oxygenates their blood.

An airplane mimics the shape of a shark with a fusiform body streamlined like a bullet, large pectoral fins on each side to help with lift (wings) and a tall caudal fin (tail) and dorsal fin for stability. In addition to cartilage, elastic connective tissue called collagen gives the shark ease of motion when thrusting its tail fin back and forth for propulsion. Like stretching a rubber band and letting go, this lateral motion releases equal amounts of energy in both directions, allowing sharks to move fast with minimal effort!

Sharks have dermal denticles or “skin teeth,” which are made of dentin, the same material found inside teeth.

However, both classes of fish have teeth, which is probably the first attribute you think of when the word “shark” is mentioned. The roots of their teeth are embedded in gum tissue, instead of jaw bone like ours. Sharks shed their teeth at every meal and a large shark may lose 30,000 teeth over its lifetime.

There are approximately 500 species of sharks on earth, which sounds like a lot, but in comparison, there are 25,000 species of bony fish. Sharks live in all parts of the ocean marine environment. Some stay in the deep, others venture close to shore, some travel great distances, some visit the surface, and some can even tolerate fresh water (bull shark).

The smallest shark (dwarf dogfish) tops out at six inches when fully grown while adult whale sharks can approach 40 feet in length!

Fish typically reproduce with external fertilization meaning that eggs are fertilized after they are laid.

Sharks mate with internal fertilization, the type of sexual reproduction you have to explain to your kid at some point. It is obvious when a female has mated because of the bites and clasper barb marks inflicted by the male shark. Pleasurable? Probably not.

Luckily, she can store sperm for at least a year, minimizing the encounters. The bonnethead, according to an article published in the August 22, 2007 issue of Biology Letters, is one of four shark species that is capable, in rare cases, of a virgin birth (parthenogenesis).

Although they all mate, sharks have various methods of reproductive development.

Some are oviparous (lay eggs after mating), others are viviparous (give live birth) and some are ovoviviparous (carry eggs which hatch inside of the female). The sand tiger shark is ovoviviparous with a 9-12 month gestation and has two uteri, producing only one offspring from each uterus. These two shark pups consume all of their siblings in the womb and continue to feed on their mother’s unfertilized eggs for sustenance. The three-foot-long sand tiger shark pup is more developed at birth than other species of sharks.

The most common sharks in South Carolina’s estuaries are Atlantic sharpnose, sandbar, bonnethead, blacktip, finetooth, scalloped hammerhead, nurse, lemon, tiger, sand tiger and dusky. Spinner, bull and blacknose sharks are also observed to a lesser degree. Sharks are usually more plentiful near shore in the spring and summer and move off shore in fall and winter.

Captain Amber, is it true there aren’t many sharks around Hilton Head Island because the dolphins scare them away?

Ummmm…no. We have plenty of sharks, but larger sharks have a greater range and move even further off shore in lean months to find fish, since larger sharks require larger food. As nurseries of the ocean, estuaries are not the best place to find large prey items. Dolphins pretty much bogart food in the winter, and there is less to share. While sharks typically don’t prey on dolphins, they may attack vulnerable pod members. However, the entire pod will defend the weaker members of their family and the shark may get more than he bargained for. Examples of sharks that would attack a dolphin would be bulls, tigers or great whites, in a pelagic (open seas) environment.

Sharks feed primarily in low light or at night. Death by shark attack is rare in our area and the last fatal shark attack in South Carolina took place in 1852. It is important to realize sharks don’t seek revenge and are simply following a path leading to the most food.

By the way, sea turtles are on the shark menu and sea turtles swim to shore to nest—at night!

However, there have been more shark bite reports lately in the Carolinas. My theory is more sea turtles plus more tourists equals more opportunity for interaction. I don’t believe that after millions of years they are changing their behavior, unless they are running out of food.

Sharks live long lives and are slow to reproduce. A consistent decline in the population will not recover quickly and they are at higher risk than other fish. They maintain the health of the ocean by taking out the weak, dead or dying. There is so much we do not know about the ocean and its inhabitants. But it is undeniable that if this creature is not protected, we will see adverse changes in the marine environment.

All other species must have a minimum fork length of 54 inches. Fork length is measured from the tip of the shark’s nose to the fork in the caudal fin (tail). A shark with a 54” fork length would have an approximate total length of 5 1/2 to 6 feet.

Shark fishing from the shore is illegal. For details on shark populations in South Carolina estuaries and fishing regulations, visit dnr.sc.gov/marine/mrri/shark.