It was the first hurricane warning I’d ever taken seriously. 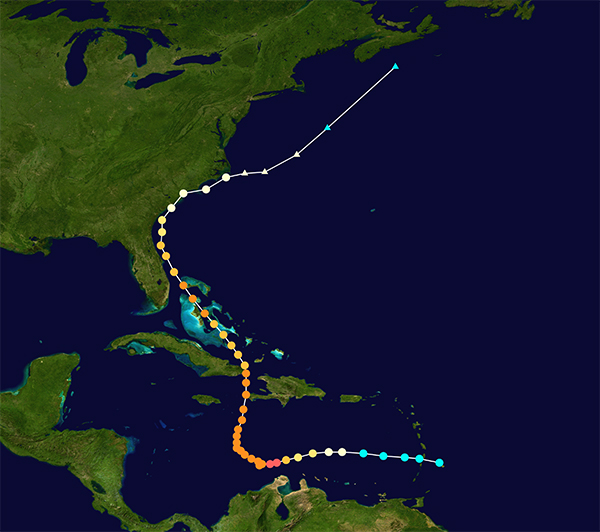 Since moving to Bluffton from the West Coast in 2004, I’d seen a few storms come and go; Hanna in particular I remember as causing the most ruckus. Everyone scrambled to stock water and board windows, and their feverish flight clogged the roads. I thought the whole thing was stupid. Like Hurricane Matthew, Hanna had ravaged Haiti before supposedly heading our way, so I bought some Haitian rum and made a signature cocktail to ride it out—but I wasn’t too surprised when all she brought was a light mist, a puff of wind, and an extra high tide in the marsh behind my house. I grabbed a beverage and went kayaking, my dogs swimming happily behind me, and laughed at what a joke it all was.

I don’t like the fear-factor mentality and refuse to feed into panic. But from the beginning something told me to take this threat seriously. Maybe it’s because now I live in an 18-foot travel trailer instead of a house, and my neighborhood is a deathtrap of projectiles. I left at 5 a.m. on Thursday morning to beat the Georgia evacuation traffic and headed East on I-16.

The first light of a beautiful calm-before-the-storm day was streaking the Eastern sky that morning. I was pulling the camper up a dirt road to my home away from home: a cozy triple-wide set amidst cotton, peanut and soybean fields, with patches of scraggly woods. My dear friends Farmer Joe King and his wife Ros took me in. I would spend the following week at peace and ease. I was with good people who loved and wanted me there, and I didn’t spend a dime. You couldn’t get more fortunate in an evacuation than that.

Back in the day, there was no such thing as evacuation, let alone the Weather Channel. Hurricanes did not have official names.

I’ve always read about the worst tempest in South Carolina history, the Great Storm of 1893, so monumental that ex-slaves reckoned their age by it. It slammed the Lowcountry unexpectedly one night with 130 mph winds and 20-foot storm surges, and the next day all anyone could do was try to disentangle the bodies from the trees. A survivor told of seeing a dead woman hanging onto a house timber with her teeth. No one knows the exact death toll, but estimates range from 1,000-2,000, a majority of whom were freed blacks scratching out their new living on the Sea Islands—and that’s to say nothing of their crops, livestock and shanties. Today, it is ranked the fifth deadliest hurricane in American history. But what we can be thankful for is that although a storm of equal magnitude today will certainly cause widespread destruction, it will not kill as many people. Hopefully the deadliest storm in local history will remain so forever.

Yet, there is still no such thing as evacuation in places like Haiti.

Those people are just sitting ducks in their little shacks, until the palm thatch and corrugated tin blow apart, then they cling to coconut trees. They don’t have cars—where would they go? In their lives, they may never venture over 20 miles from the village of their birth, anyway, it’s an island, with few solid buildings that provide adequate protection.

In the aftermath, their water is contaminated by sewage and corpses, their food is rotted or nonexistent, but no one fights over gas pumps or bottled water because such things are not to be had. When a big one hits, they just die. As I write this, the estimate from Matthew stands at over 1,000 souls.

As the storm skirted Florida and tracked up the coast, the first U.S. fatality was reported due to a heart attack.

The second was a woman in Jacksonville who got smashed when a tree fell on her camper. Yeah, I had definitely made the right decision in leaving, I thought as I kicked back on the couch watching the news with Joe. Hurricane Matthew was closing in on Georgia, but I felt safe. I was well inland, staying in the house at night, and my camper was battened down snug in a clearing with no trees.

That night, the rain lashed and the wind howled with surprising force.

This cost me sleep purely because I was thinking “If it’s this bad 80 miles from the coast, what’s it doing in Bluffton?” By 5 a.m. our power was out. We’d spend the next several days with no water or light. It wasn’t until we went to Statesboro in search of a hot breakfast that I witnessed the real damage. Lines down all over the road. Four cars under one tree. Roofs torn up with rain coming in. Businesses closed and wrecks happening at stoplights because there was no electricity anywhere. Joe and Ros said that although they’d weathered worse in tornados and thunderstorms. This was the most they’d ever felt a hurricane. No one expected it to hit so hard in Statesboro. But, as I was to find out, that was nothing compared to Hilton Head and Bluffton.

Hurricane Hugo was so bad they retired the name. Hurricane Floyd caused such a fiasco with the botched evacuation. Residents recall people dying of heart attacks and thirst on the parking lot that had been I-26. People were trapped for 20 hours only to find out the storm had turned away and they would be spared. Just last year, a devastating 18 inches of rain fell in 24 hours over Columbia, causing a “1,000-Year Flood” that drowned people and wreaked millions of dollars in property damage. Matthew will certainly take its place among these catastrophes.

As for me, I lingered happily on the farm with Joe and Ros…but the reports coming from home were not good.

One friend had a tree through her house, another three feet of floodwater. Another got all his crops washed out; another lost his boat and his dock, not to mention his dad had a stroke during the event. One spent two days by the roadside with her family because they couldn’t afford a hotel. Another got stranded in a mansion in Wexford with no water and a diarrhea-ridden dog. A person got held up at gunpoint during the aftermath.  Other were working 12-hour shifts with backhoe and chainsaw just to cut through the mess at Sea Pines. Still another described the surreal feeling of returning by night to an apocalyptic scene of dangling power lines. The roads were unrecognizable. Smoke was rising eerily from illegal fires. There was not a soul in sight, except convoys of utility trucks headed in the opposite direction.

Spots of total devastation here and there seemed to indicate mini-twister touchdowns.

No one knew when the power would be back. But as I made my calls to check in, the important thing was that everyone remained alive and safe, even those who stayed to ride it out. They all said the same thing: “It was a long night.”

By the time I came home, the power was on and things were settling down. Based on what I’d been hearing, I expected to find the whole place leveled, like those images you see after a tornado or a bomb: nothing but splinters and rubble. Yet, apart from toppled trees and lingering puddles, things looked mostly the same.

The roof had blown off my shed, but I anticipated that and covered my worldly belongings with a tarp.  Otherwise, my only casualty was that I lost my kitty-cat. Later, I went to visit some friends around Alljoy—a particularly hard-hit area—where a fresh perspective emerged as they talked of incredible camaraderie: people coming together with chainsaws, dinners shared over grills and space lent to neighbors in generator-powered freezers so that their quart bags of shrimp wouldn’t spoil.

At the end of the day, messes can be cleaned up, damage can be repaired and lost wages can be recouped. Things eventually return to normal, or at least whatever semblance of it we can expect in this constantly changing world.

My heart goes out to everyone suffered major devastation, but for myself I’ll never take a hurricane as hard again. The wisdom of experience is that when the worst comes to pass, the storm breaks up, and the sun shines on whatever’s left. Bluffton smiles on.