Loggerhead Sea turtles have been part of our geological fossil records for over 210 million years. 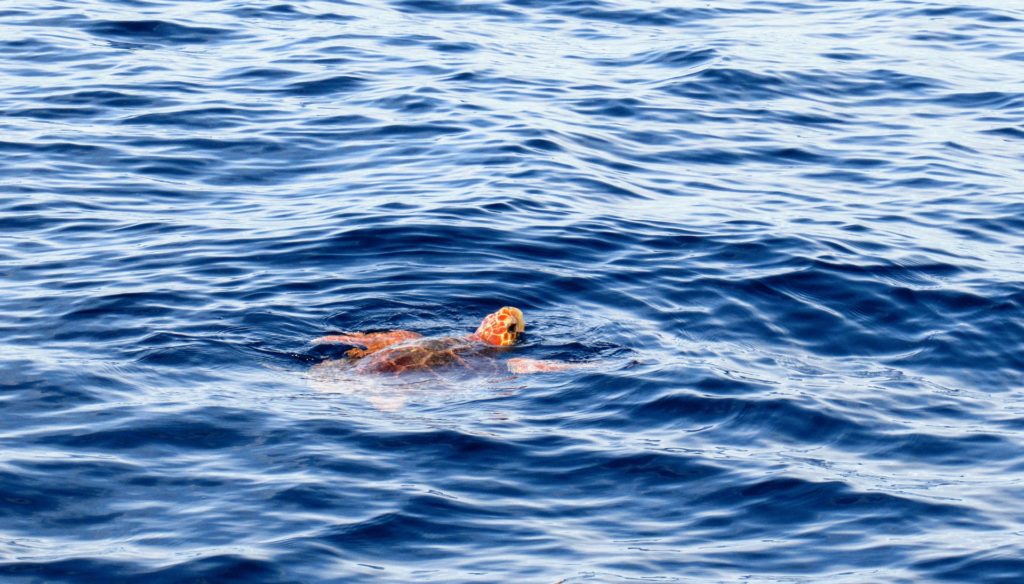 There are seven varietal species that can be found around the world in tropical, sub-tropical and temperate waters and all of them are endangered. The Loggerhead Sea Turtle is the most common one to nest on our beaches during the summer months.

They have four large and powerful flippers used to swim through the world’s oceans, as well as hydrodynamic-shaped shells that are well adapted to their aquatic lifestyle. The upper part of the shell is known as the carapace and is a reddish brown color; the dull yellow, brown lower part of their shell is known as the plastron. With large heads and strong jaws, their beak-shaped mouths are perfectly formed for a carnivorous diet.

Weighing up to 400 pounds and reaching up to four feet in length, males will grow larger than females. However, once the young hatch, only females will ever return to land in order to lay eggs. Reaching reproductive maturity around the age of 35, breeding begins in the early spring.

Once breeding has occurred, the females stay in local waters eating an abundance of shellfish and jellyfish, as the eggs develop.

Nesting usually occurs at night between May and September. Once the female is ready to lay her eggs (about 30 days after breeding), she will come onto our local beaches making her way past the high tide mark to the soft sand and use her strong flippers to make a cavity about 18 inches deep. She then deposits, on average, 120 eggs which closely resemble ping-pong balls, buries the eggs and returns to the sea. She stays in the area for a few months, laying up to 4 different clutches throughout the summer.

The eggs incubate in the nest for about 60 days and, as they are reptiles, incubation temperature determines gender. Warmer temperatures lead to more females, while cooler nests mean more males. The nests can be predated on by a number of different causes, both natural and unnatural. Ants, crabs, birds, racoons, feral hogs and dogs have been known to dig up and eat the turtle eggs. Human disturbance of nests is minimal, but can occur.

When ready, the palm-sized young hatchlings work together to dig toward the top of the nest.

They instinctually hatch at night when surface sand temperatures are less dangerous. Once out of the nest, the hatchlings are able to find the ocean by the downward slope of the beach and the reflection of the moon off the surface of the ocean. Predators on the beach may get to some of the hatchlings as they make their way to the water. Others may head towards outdoor lights left on at beachfront properties. This disorientation usually leads to an entire clutch’s fatality and is the reason behind the local Lights Out for Turtles initiative.

Once hatchlings have made it to the sea, they will swim for three days heading towards open water.

They look for large expanses of floating sargassum seaweed on the surface. The sargassum is a great habitat for young turtles, providing an abundance of both protection and food. After 12 years floating passively in the North Atlantic, they begin to head back into coastal waters along the Continental Shelf and continue to mature. Once they reach full maturity at the age of 35, the process begins again.

In the 1970s, loggerheads were determined to be a threatened species by both South Carolina and the United States.

The Hilton Head Island Sea Turtle Protection Project began in 1981 and, today, it is upheld through a group of volunteers and experts.

On average, about 250 turtle nests per year on neighboring Hilton Head Island. As August 2019, a record number of nests were found, with over 460 and counting. For more information on South Carolina’s Sea Turtles visit www.dnr.sc.gov/seaturtle.

H2O Sports is a great place to spark curiosity and inspire learning, offering eco-adventure tours and live alligator exhibits. To make reservations for the Alligator and Wildlife Tour, please call (843) 671-4386 or visit www.H2OSports.com.