Discover local haunted houses that may be home to spectres and spirits from another era.

The stately old Southern homes overlooking the narrow streets in downtown Bluffton evoke another time and another place. In fact, they’re some of the most photographed attractions in the town.

Photographers, tourists and locals can be seen photographing these beautiful old homes, but is it be possible that more is developing in those photos than meets the naked eye? Some may not know that ghost photos, haunted houses, haunted cemeteries, urban legends, myths and secret voodoo rituals abound this charming old Southern town mingled with rich, ghost-filled history.

Famous psychic ghost hunter Sam Carona explains that every shutterbug should always check their pictures for amorphous, wispy images of otherworldly inhabitants taking up residence in these old Southern dwellings. On first inspection, it’s easy to dismiss some of the images as haze or sunlight on the lens, but taking a closer look often uncovers a mysterious resonance in the photos, as if the images are imprints of towns and people from another era.

Families living in Bluffton have reported being accompanied, sometimes all night, by a mysterious presence that no one seems to recognize.

There have been stories told of residents seeing people waving from a front porch, only to learn that the person they described had passed away, and the greeting they received was from the other side!

So, the next time you visit Bluffton, as you walk through the quiet streets and pass the old Southern homes and churches, remember to look around and wave. You never know, you might be greeting a visitor from the past, a revenant spirit from another domain!

We have to acknowledge the fact that many of Bluffton’s antebellum residences were burned during the Civil War by federal troops on Sherman’s infamous “March to the Sea.” This historical fact accounts for undocumented assumptions about the origins of many of the local ghosts.

Here are a dozen haunted highlights you’ll discover along the way:

A thriving business which offered the clothing, dry goods, books, shoes, hats, harnesses, wagons, luggage, sewing machines, cigars, groceries, furniture, feed and oddly, a very special item: coffins. It is said the owner and proprietor Abram Patz met an untimely death here. According to legend, he awoke in the middle of the night with a stomachache and came into the store to find something to relieve his pain. In the dark, he poured what he thought was elixir for his ails; however, what he ingested was a dollop of carbolic acid. He was found dead on the floor the next day.

The Patz brothers, Abram and Moses, came from the East, perhaps New York State, around 1890. They built the store first, the Planters Mercantile. In 1892, a double residence was designed next door with mirror image apartments on each side, each having its own front door, hall and stairway. It has been said the brothers’ wives feuded often and had not spoken to each other in many years, although they resided in the same building.

J.J. Carson distinguished himself at the battle of Chancellorsville in May of 1863 by braving the gunfire of the battleground and rescuing the mortally wounded General “Stonewall” Jackson. Placing Jackson’s body on a buckboard, Carson drove him back through enemy fire and lines to the Rebels’ side. After surviving the war, he came back to live in this house in Bluffton.

The property was damaged by the fires set by federal troops on June 4, 1863, but was not totally destroyed. The land changed hands many times until 1904, when Jesse Davidore Peeples of Scotia, SC bought the property and built a store and a commodious home for his family. The home no longer exists. He had five children by his first wife, Willie Mae Stokes and 10 by his second wife, Maud Estella Guilford. The 10 sons were named after the disciples. Mr. Peeples operated the store until his death in 1937.

Two of his sons, Matthew and Luke, continued to operate it until the 1950s. Luke was an avid piano player and scored gospel music. One of his brothers began a monastery on Potato Island and renamed it Good Shepherd Island. The name was later changed to Devil’s Elbow by Harry Cram. Brother Andrew was a prolific writer, and you have read some of his wonderful stories in the Bluffton Breeze. The family is buried in the Bluffton Cemetery. It is said that sometimes late at night on Calhoun Street you can still hear the sounds of his eerie piano music floating about.

This lot was the location of the summer residence of Squire William Pope of Coggins Point Plantation, Hilton Head Island. There is no record left to tell us what the home looked like, but it was undoubtedly large and handsome as the Squire was wealthy and had a large family. The home it went up in flames on June 4, 1863 with the wholesale burning of the Bluffton waterfront by federal troops during the Civil War. Following the war, when Mrs. Pope and her daughter returned to Bluffton virtually destitute, they realized the carriage house and a smaller building nearby had not been destroyed and formed the present structure where they lived out their days.

Located across Calhoun Street from the Church of the Cross, on any given full moon misty night, several Bluffton natives have seen candles burning inside the abandoned summer home. Are the sisters still stirring? A gunshot death. It is said you can still see the blood stains on the floor in room number 13.

This three-story frame building in eight-foot piers is believed to have been built around 1830 by James L. Pope. The earliest records show the property was owned by him prior to 1847. James L. Pope died in 1863, and his son, James Jr. inherited it. The property remained in the family until 1883, when Mrs. James L. Pope Jr. sold the house to Rebecca Sims. In 1885, Mr. and Mrs. William J. Fripp acquired the property. The Fripp family owned the house for 34 years; hence the name “The Fripp House.” An interesting fact is that the Fripp House was not burned down during the “Burning of Bluffton.” For some unknown reason, the Yankees certainly must have walked right on by and not set it to flames. Was it the spirit of James Pope, or is there perhaps another reason?

The origin of this antebellum house is difficult to document; however, it is believed to be one of the oldest in Bluffton still standing. The first owner of record is William J. Graham, who owned it until 1847. Another deed shows the property was owned by Sarah G. Norton. William Norton of St. Helena Island moved to the Bluffton area around 1800 and resided here until his death in 1817. Undocumented sources indicate the house was built circa 1825.

Why is it called The Card House? One story has it that in the late 1840s, during high-stake poker sessions often played in the house, William Eddings Baynard won the deed to the 1,000-acre Braddock’s Point Plantation on Hilton Head Island from the unfortunate owner, Mr. John Stoney. So, from then on, it has been known as The Card House.

When you talk about the Pine House, you must talk about the people who lived there and how it came to be Bluffton’s most beautifully restored treasures. General Thomas Ferguson Drayton of Civil War fame owned the original house on the property, which was destroyed in the Burning of Bluffton. Sometime later, Dr. William Raiford Eve built a house facing the cove (later named Heyward Cove after the four generations that lived there). This home was burned from unknown causes. In 1904, Dr. Freeman Valentine Walker and his wife Mary McAlpin built the home that now stands on the property. In 1942, Gillard and Lucille Heyward purchased the property, and along came Tommy Heyward, who grew up there.

Some 60 years later, Tommy and his wife Joannie completely restored the home. Tommy died in 2007, leaving Joannie to care for the home. Following Hurricane Irma, a well-known Blufftonian who was checking for damage recounts that he looked up and there was Tommy, sitting on the roof. Tommy remarked, “Well, what else would you expect?” and then vanished. His spirit is certain to be seen again guarding Joannie and his childhood home.

This property was also owned by the Heyward family prior to the antebellum period. The original home on the banks of the May was also burned by federal troops. In 1890, it was rebuilt on the same foundation and, in 2013, was lovingly restored by the Zokan Family.  During the 1920s, the home was said by some to be a restaurant, where wealthy locals and Savannahians would come over by steamboat to eat and play. It was owned at that time by Mimi Norman. Others say that it was a speakeasy and gambling hall, as this was during Prohibition.

All sorts of things must have gone on during that time. Decades later, Blufftonians would walk down the dirt road at night and swear they heard Mimi and her guests’ laughter. One can only imagine that when Mimi returned to see her restored home, she smiled at what she saw and is resting in eternal peace.

Sara Riley Hooks was a retired public health nurse, daughter of M.C. Riley, the Bluffton Town Hall of Fame member for whom our local school was named. Her renowned son, Tony Hooks, was the lead guitarist with Sly and the Family Stone. The 1960s song “Dance to the Music” was a groundbreaking jam that had the distinction of being chosen for the Grammy Awards Hall of Fame and the Rock and Roll Hall of Fame’s “500 Songs That Shaped Rock and Roll.”

A bizarre thing happened early one Bluffton morning: Tony was shot dead on Sarah’s front porch.  The shooter drove off and was chased by the police all the way to Savannah, where he was caught. All of Bluffton was in a state of shock. It was said that Tony was shot in a lover’s quarrel on the front porch. An arrest was made, but the motive and gun were never found. The house is now in a state of demolition by neglect and uninhabitable. It is said that on certain nights when there’s a high tide and full moon over the May River, if you listen carefully you can hear one of Tony’s great riffs.

The use of the word “praise houses” by African-American residents began before the Civil War, when slaves built simple frame structures for worship on local plantations. These structures sadly enough were kept small, as the plantation owners did not want a large group of slaves to gather together at the same time. This building no longer exists, but old timers have said that early Sunday morning, you can hear old spirituals being sung as far away as the Oyster Factory. 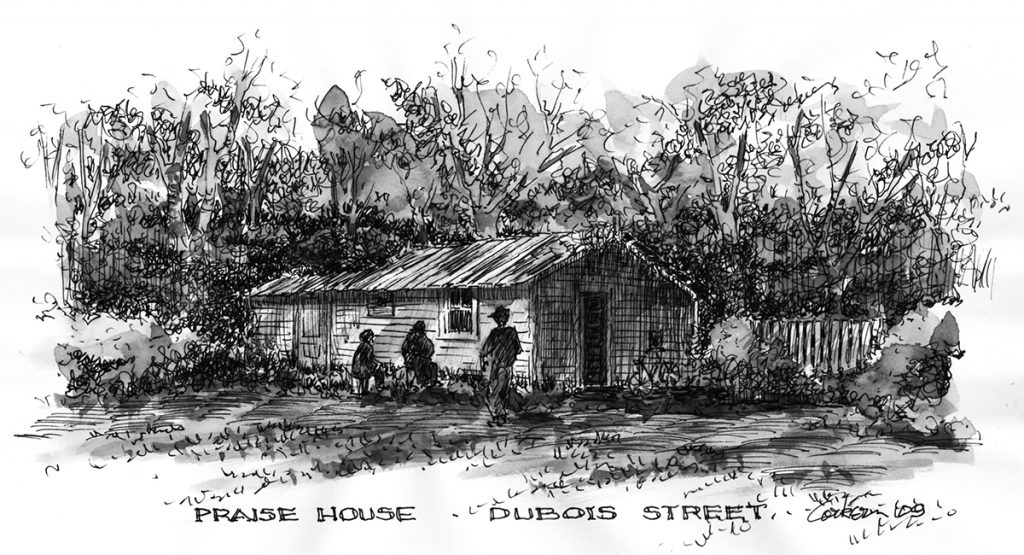