.A peanut butter stout and vanilla bean cream ale are just two of the concoctions crafted around town.

But you wouldn’t know that or get to try these tasty brews unless you strode inside River Dog Brewing Co., Southern Barrel Brewing Co. or even Fat Patties, where brewers are coming up with craft beers unique to our Carolina coast.

“The guys that operate on the super small levels can do some unique boutique things,” reveals James Brown, the brewmaster at Salt Marsh Brewing, the new nanobrewery, which sits on the second story of Fat Patties, overlooking the booming burger joint. “We’re so small that we can be a little more nimble and try out a little more exotic ingredients and fermentation processes.”

It’s why Brown teamed up with Nick Borreggine and Fat Patties to open Salt Marsh in the heart of Bluffton. 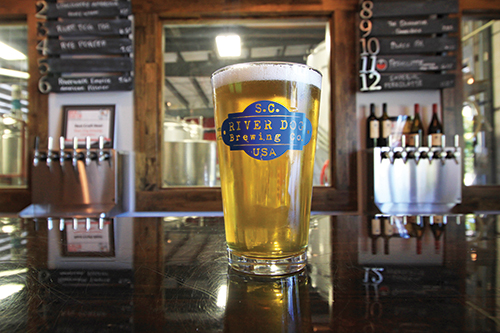 After working for a few years at River Dog, Brown knew he wanted to do things on an even smaller scale, which would allow him to play and get more unique hops and boutique grains—ingredients that brewers wouldn’t want to use on a large scale because it would ramp up costs significantly. After all, he, like many brewers in the area, wants to craft creative, artful brews.

“Bringing that level of creativity and boutiqueness to downtown was so intoxicating because there’s nothing like that in Bluffton,” Brown admits.

While Brown brews to the tunes at Fat Patties on Bluffton Road, John Federal heads the brewery at River Dog out in Okatie. He started doing small batches only available on tap at their bar. Federal plans to use these craft brews to educate guests on the different hops and malts.

Southern Barrel is already on the small batch bandwagon—out of 12 beers on tap, about four are small batch rotations. Federal and Walter Trifari, the brewmaster at Southern Barrel, even have their own SMaSH (Single Malt and Single Hops) beer series showing customers how the two ingredients interact with each other.

“I already knew it was an uphill battle here in Bluffton, as far as the culture of beer versus the rest of the country, and I was okay with that. Our job here is just to keep educating people on beer,” Trifari explains. 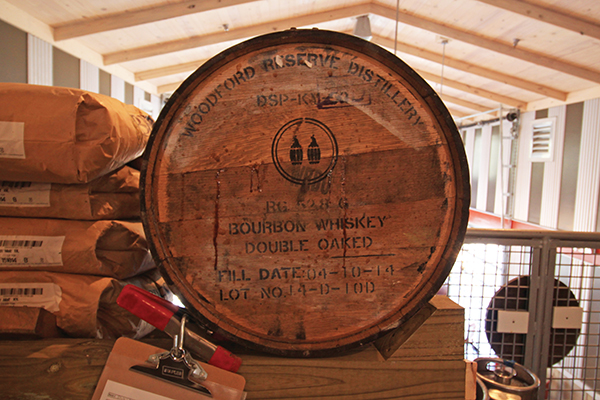 It seems the brewing business is exploding here in Bluffton, with the opening of River Dog Brewing Co., Southern Barrel last May and Salt Marsh at Fat Patties in October. However, the truth is Bluffton—and the entire state of South Carolina—is a bit behind.

Just 250 miles away in North Carolina, there are more than 150 breweries. South Carolina doesn’t even have 50 yet, which is less than Georgia, where brewery laws are even more constrictive.

On the other hand, business is booming in states such as California, where there are more than 500 breweries, and Colorado, which is on the cusp of 300. Every state runs on a three-tier system—manufacturing, distribution and retail—and some of these leading states have laws allowing breweries to be their own distributor, instead of using a distribution company which takes a share of the profits. The effect? Obligatory distributors rise in power in the market at the expense of craft brewers. That’s one of the reasons why you don’t see Salt Marsh’s brews anywhere else in town but Fat Patties.

“Currently Salt Marsh is at Fat Patties only, as South Carolina does not allow us to distribute,” Brown explains. 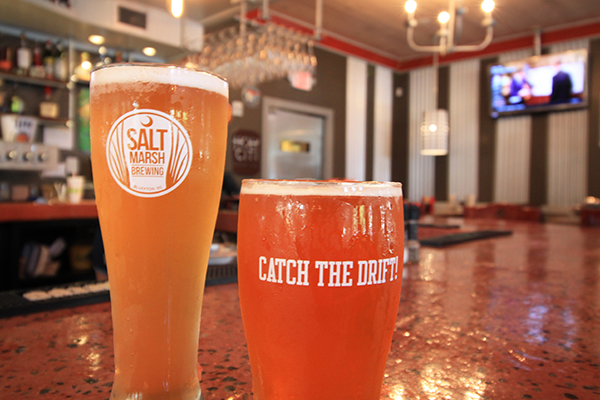 While North Carolina breweries can bypass the second tier and self-distribute. South Carolina prevents this. Breweries, such as Southern Barrel and River Dog have retailer licenses. But, they must send anyone looking to get a keg to their distributor. They are only allowed to sell glasses of beer, six-packs and growlers.

These regulations were put in place during Prohibition and these antiquated laws aren’t conducive to small businesses. They allow big breweries to get bigger at the expense of newcomers, who already have higher costs for production, ingredients and packaging. But even with these hurtles, craft beer sales continue to grow.

Last year, while overall beer sales went down .2%, craft beer sales grew about 12.8% (twice as much as imported beer), according to the Brewers Association. Though macrobreweries have a hold on the beer market, craft breweries have risen to the challenge.

“Macrobreweries have learned over the years how to sell quite a bit of beer.

They know how their packaging colors work and where it needs to be placed in the cooler,” says Trifari. “They will even make beers that look and, they think, taste like craft beer and try to get their name off the whole package so people think it’s craft.”

Creative—some say sly and sneaky—marketing has allowed macrobreweries to produce and line up beers at stores that look like craft brews. It’s also trained individuals to think that beers are best served at the coldest temperatures—which may be true for some, but is certainly a myth in many cases.

As Trifari puts it, cheaper beer doesn’t taste very good when it warms up and that’s why companies insist on frozen beer glasses and ice-cold beer—because the colder the beer, the less you taste.

“We’re trying to help people understand that good flavor comes from good ingredients, taking time to make the beer and that here we are making the beer, as part of the community,” Trifari notes. 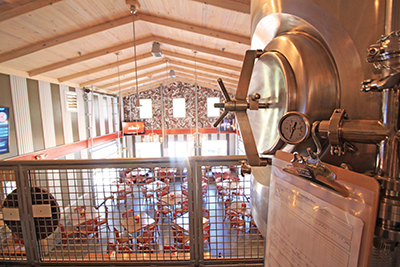 Local craft breweries have to band together. They too are in their own uphill battle. To survive, it’s vital for the community to embrace local products and businesses.

“Just supporting a local brewery is huge and it’s simpler than most people realize,” says Trifari.

“Actually buying some beer from us goes a long way; it’s going to help my kids play soccer or help some other kids get braces. It’s going to impact the local community more than people think.”

While buying beer plays a big part, getting out, enjoying quality time is just as important.

“The benefit is more people get interested in what beer can be,” Federal explains.

After all, each brewer is like a different chef. Each of Bluffton’s brewers have worked their way from home brewing to brew pubs and big production breweries. Then they scaled back to smaller settings, just miles off the May River, to concoct appealing creations.

“We’re all going to be unique in our own way, be it different ingredients or a different process. All of our goals are the same: to produce clean, refreshing, and the highest crafted beer possible,” Trifari says. “Salt Marsh, Southern Barrel, we’re all brother in arms, banning together to try and make craft beer better.”

All Photos by Andrea Six