May is National Preservation Month, and the Town of Bluffton is presenting “Bluffton — Past, Present and Future,” the Second Annual Preservation Symposium on May 25, 2017 at Town Hall. We felt it only appropriate to contribute a feature on the eight antebellum homes that survived “The Burning of Bluffton” in 1863. The photos and history are from the The Bluffton Historical Preservation Society’s archives and reprinted with permission. 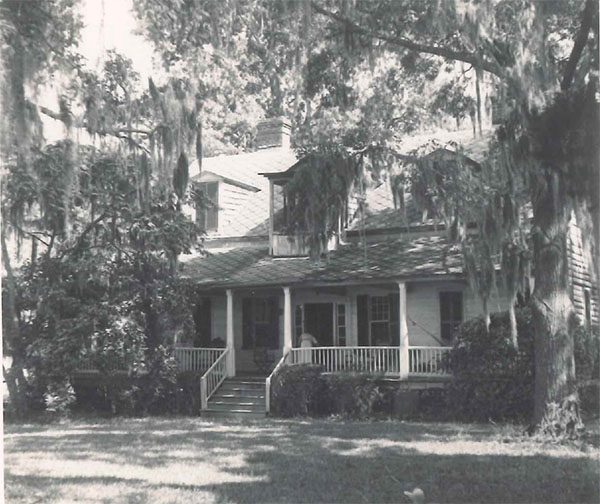 This is the only antebellum house on the bluff overlooking the May River that survived the Federal burning of Bluffton on June 4, 1863 and the house still has Federal forces’ musket balls lodged in the front door studs.

The frame one-and-a-half story building, built around 1795 and later enlarged, is placed on a low brick foundation of piers with a gabled roof and interior chimneys. A one-story veranda with a shed roof and chamfered posts runs the width of the house on the river side and the central dormer has glass doors cut into the eaves of the roof and veranda.

The owner, Colonel Ephraim Mikell Seabrook, sold the home in 1863 to Dr. Joseph Alson Huger II and it remained in the family for over 100 years. Mr. and Mrs. Hugh Gordon made alterations to the interior and exterior of the home in the mid-1970s. The house is now owned by Mr. and Mrs. Kent Collins.

The Cole-Heyward house is an example of early Carolina Farmhouse style brought by planters from the West Indies. The earliest part of this home was built by John J. Cole and his slaves in the 1840s as a summer home for his wife, Caroline Corley, and their children. The original house started as a north parlor with a bedroom above, and was expanded in 1860 to more than twice its original size by doubling the front and side windows in the front rooms and expansion of the dining room and back bedroom.

The Cole family left the Bluffton area in 1874 and sold the house to the DuBois family, who then sold it to Mrs. George Cuthbert Heyward in 1882. The home stayed in the Heyward family until it was sold to the Bluffton Historical Society where it now serves as a museum and the Official Welcome Center for the Town of Bluffton. 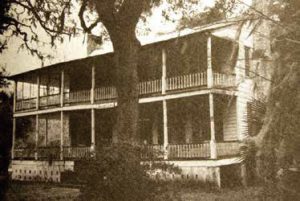 The first owner of record was Colonel Middleton Stuart who resided here prior to the Civil War. Col.
Stuart’s wife was Emma Barnwell Stoney who inherited Otterburn Plantation from her father, Dr, George Mosse Stoney. The Stuarts did not return to Bluffton following the war and the property was sold to Francis Marion Edwards. The house was subsequently owned by Ephraim Mikell Baynard and E.J. Harrison.

During the heyday of Bluffton’s prosperity as the commercial center of Beaufort County in the 1920s, Mrs. Elizabeth Sanders operated Seven Oaks as a popular boarding house for salesmen and summer visitors.

A horrible brawl occurred one night in the boarding house, resulting in a gunshot death. It is said that you can still see the blood stains on the floor in room number 13.

Examining the foundation, one sees hand-hewn beams, and a fireplace foundation that is arched for strength, typical of Italian masons. Seven Oaks is now the administrative offices for Church of the Cross. 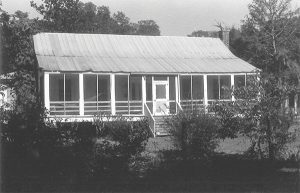 This cottage was built by William Gaston Allen on the northwest corner of Calhoun and Water Streets in the early 1850s for his wife, Susan Virginia Bolan, and their six children. It is a classic example of a Lowcountry summer cottage with its gabled roof, commodious high-ceiling rooms and windows used for cross-ventilation. The home is raised, and sits on brick piers. It features a wide porch spanning  the south facade.

By 1866, Colonel Allen was bankrupt and a forced sale of the home resulted in his daughter, Susan Virginia, (Mrs. Thomas Postell Lockwood), buying the home for $10. It remained in the family until 1953. Currently the home is owned by Outreach Ministries, Inc. of the Church of the Cross. 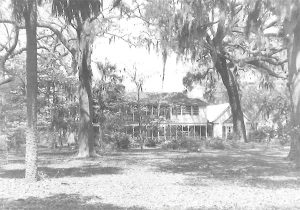 This lot was the summer residence of Squire William Pope of Coggins Point Plantation on Hilton Head Island. There is no record left to tell us what it looked like, but it was undoubtedly large and handsome, as the Squire was wealthy with a big family. It went up in flames on June 4, 1863 with the wholesale burning of Bluffton’s waterfront.

Following the war, Mrs. Pope and her daughter returned to Bluffton. Virtually destitute, they found the only homes that had not been destroyed were the carriage house and a smaller building nearby (c. 1850). They had them joined together to form the present structure where they lived out their days. The Town of Bluffton has recently purchased the property. 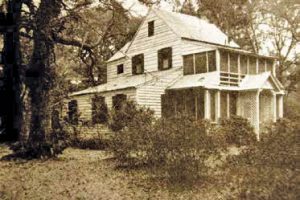 The origin of this antebellum house is difficult to document; however, it is believed to be one of the oldest homes in Bluffton still standing. The first owner of record is William J. Graham, who owned it until 1847. Another deed shows the property was owned by Sarah G. Norton. One William Norton, of St. Helena Island, moved to the Bluffton area around 1800 and resided here until his death in 1817.

Why is it called The Card House? One story says that in the late 1840s, during a high-stakes poker game, William Eddings Baynard won the deed to the 1,000-acre Braddock’s Point Plantation on Hilton Head Island from the unfortunate owner, a Mr. John Stoney. From that point on, it has been known as The Card House. The home is currently the owned by Albert Scardino. 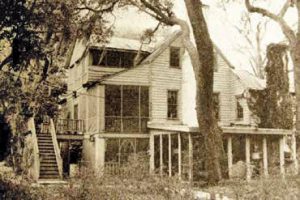 This three-story frame building on eight-foot piers is believed to have been built by James L. Pope. The earliest records show the property was owned by him prior to 1847. James L. Pope died in 1863 and his son, James Jr., inherited it.

The property remained in the family until 1883 when Mrs. James L. Pope, Jr. sold the house to Rebecca Sims. In 1885, Mr. and Mrs. William J. Fripp acquired the property. The Fripp family owned the house for 34 years; hence the name, “The Fripp House.” Up until 1999, it was used as a bed and breakfast. 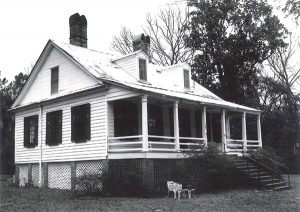 John Archibald Seabrook is believed to be the original owner of this home, built in the 1840s-50s. These Lowcountry style homes—two-story frame weatherboard on six-foot piers. There are two dormer windows on the north and south sides of the steeply pitched gabled roof. On the north side are two tall brick chimneys, and the old summer kitchen (previously detached) was raised on piers and attached during the 20th century.

In 1876, the property was sold to Egbert and Kate H. DuBois. In 2000, the house was purchased and carefully restored by Mr. and Mrs Van DuBose who won the BPHS Caldwell Award for Historic Preservation. The home is presently owned by Cynthia Minard.