Tides are the rise and fall of sea levels. 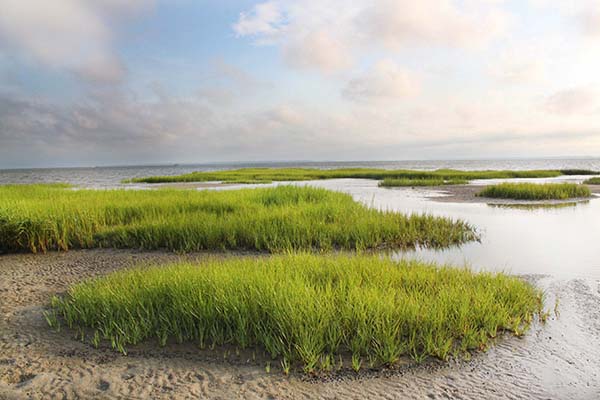 The combined effects of the gravitational forces exerted by the Moon and the Sun, and the rotation of the Earth causes tides to fluctuate.

Tide tables can be used for any given locale to find the predicted times and amplitude (or “tidal range”). Many factors influence such predictions. These include the alignment of the Sun and Moon, the phase and amplitude of the tide (pattern of tides in the deep ocean), the amphidromic systems of the oceans, and the shape of the coastline. Wind and atmospheric pressure play a part in their actual time and height, too. This is why tide charts are but an educated prediction. Many shorelines experience semi-diurnal tides—two nearly equal high and low tides each day. Hilton Head and the rest of the Sea Islands tides are semi-diurnal. Other locations have a diurnal tide—one high and low tide each day. A “mixed tide”—two uneven magnitude tides a day—is a third regular category.

The semi-diurnal range (the difference in height between high and low waters over about half a day) varies in a two-week cycle.

Approximately twice a month, around new moon and full moon when the Sun, Moon, and Earth form a line the tidal force due to the Sun reinforces that due to the Moon. The tide’s range is then at its maximum; this is called the spring tide. It is not named after the season, but, like that word, derives from the meaning “jump, burst forth, rise”, as in a natural spring.

When the Moon is at first quarter or third quarter, the Sun and Moon, 90° separate the two. When viewed from the Earth, and the solar tidal force partially cancels the Moon’s tidal force. At these points in the lunar cycle, the tide’s range is at its minimum; this is called the neap tide. Neap is an Anglo-Saxon word meaning “without the power.”

Tides vary on timescales ranging from hours to years due to a number of factors, which determine the lunitidal interval.

While tides are usually the largest source of sea-level fluctuations, sea levels are also subject to forces. Wind and barometric pressure changes from the weather affect those levels. This results in storm surges, especially in shallow seas and near coasts. Storm surges often accompany hurricanes.