There are few symbols of the Lowcountry more iconic than the centuries old, majestic Live Oak. 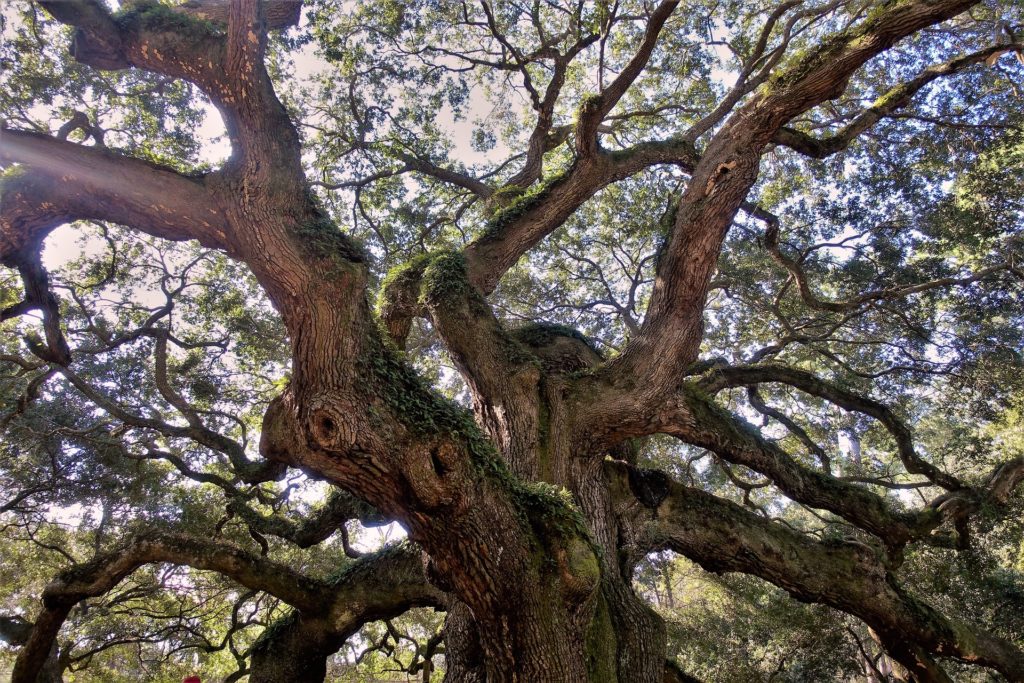 There are many such oaks in our area. These amazing trees boast some fascinating facts worth learning about, and some intriguing stories you don’t want to miss.

The name, Live Oak comes from the seemingly evergreen leaves of these trees. In reality, the Live Oak, or Quercus virginiana is semideciduous. In late February and early March, its new leaves grow in, pushing the old (but still green!) leaves out, much like a set of permanent teeth pushes out baby teeth. This process makes it seem as though Live Oaks are always green. It is only the litter of dead leaves beneath its enormous canopy that gives them away.

Live Oak trees are extremely hearty, and do well in our coastal environment.

Their tolerate saltwater well. Our 300- to 450-year-old oaks have weathered their share of hurricanes, storm surges and the occasional inundation of their roots in saltwater, sometimes for several days! Still, these bastions provide a buffer against extreme weather, plus shelter and shade, carbon capture and storage and uniquely sweet acorns beloved by the Lowcountry’s many birds and mammals, like the northern bobwhite, wood ducks, sapsuckers, wild turkey, squirrels and white-tailed deer.

If Hilton Head’s Live Oaks could talk, they would tell amazing stories! Harbour Town’s “Liberty Oak” is where Charles Fraser, conservationist and visionary developer of Hilton Head, was laid to rest. This 360-year-old giant also provides the spot where the legendary singer and songwriter, Greg Russell, has played and sung for visitors for over 30 years.

The Tailbird Oak, which stands just inside the back gate of Hilton Head Plantation, is another ancient, massive tree that’s tied up in the lore of the Island.

In October of 1781, at the height of the Revolutionary War, a Royal Militia on Daufuskie Island was instructed to burn the homes of known Patriots between Savannah and Beaufort. When the militia arrived at Tailbird Plantation, Lt. John Tailbird’s pregnant wife, Mary Ann, faced off with the officer in charge — who happened to be her brother-in-law. He gave her time to move household goods out of the plantation house and place them beneath the protective canopy of the enormous Live Oak 100 yards or so from the house. The Tailbird Oak would shelter the people and the property, but the house would burn to the ground.

As iconic as the Live Oak is, it’s hard to imagine its silhouette minus the famed Spanish moss that adorns its craggy branches.

Neither Spanish nor moss, this air plant is actually a bromeliad, and is related to the pineapple! Soft, fluffy and abundant, it seemed the obvious choice for stuffing the mattresses of early settlers. Unfortunately, Spanish moss had been homesteaded long before — by the chigger. As the moss within the mattresses died off, the chiggers abandoned ship. They ran for the cover of the nearest living creature. In this case, they ran to the bodies of the poor, unsuspecting settlers. If you ever wondered where the phrase “Don’t let the bed bugs bite!” was born, well now you know!

Hankering to learn more about our legendary Live Oaks? You can rent an electric bike and spend a morning or afternoon exploring these historical giants. Visit outsidehiltonhead.com to learn more.

For more than 30 years, Outside Hilton Head has provided personalized adventures for all ages. (843) 686-6996 or outsidehiltonhead.com.