Is juicing as beneficial as people say?

You’ve heard about it—the buzz of bottled fruits and veggies. Big cities and celebrities hopped on the bandwagon, doctors have debated it and now the craze has bounced into Bluffton with juicing. But there’s a new drink in town that’s challenging health standards.

“I hear more and more in this area, people wanting to get into it,” says Juice Hive owner Leslie Rolhand. “The elderly, the people who are sick, young people that are just on a health kick, people that have specific dietary restraints—vegans, gluten free and the lactose intolerant.”

It’s said that the “Dead Sea Scrolls”, which are estimated to date back to 100 B.C., contain some of the first documented evidence of juicing. Steven Bailey and Larry Trivieri’s 2007 book, “Juice Alive,” claimed it was a tradition from Jewish and Essene people, who were known to follow a vegetarian diet, to make a “pounded mash of pomegranate and fig” to achieve “profound strength and subtle form.” Sound familiar? 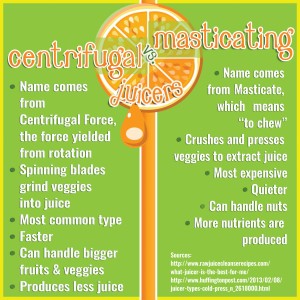 Fast-forward a few centuries and your average health-centric Joe will spend $100 to $400 on a juicer and a Hydraulic Norwalk juicer can cost over $2,000. With two main types of juicers—centrifugal and masticating—there are different ways to make the vegetables into juice. While centrifugal juicers use a fast-spinning blade and a mesh filter, a masticating (or cold-pressed juicer) squeezes and crushes the fruit and vegetables to extract the juice. Generally, masticating juicers are able to provide a more nutrient-rich drink because the centrifugal juicer produces heat from the spinning blade, causing some nutrients to be lost.

In the last year, two juiceries have opened bars on two different Bluffton blocks, each producing their own nutrient-rich tonics a different way. While Bluffton Village’s Juice Hive—owned and operated by The Cottage’s Leslie Rohland—uses a masticating juicer, Sheridan Park’s Juice Bar—brainchild of Jenny Bazzle at Affordable Healthcare—uses a centrifugal juicer.

The Juice Hive is not only a juice bar, but a healthy lunch spot that provides lunches on the go, which guests can take with them, eat inside or outside on the shaded patio. Their menu boasts everything from an array of salads (dubbed Gloria’s Greens) and Zany Zoodles (zucchini noodle plates) to wraps, earth bowls (complete with heirloom beans, grains and greens) and, of course, smoothies and juices with a slew of boosters and superfoods to mix in. In addition to the to-go counter, The Juice Hive also has a supplement side, an “emporium” room stocked with all kinds of supplements, superfoods and holistic medicines.

“We’re not trying to cure anything; we’re trying to support people’s health journey,” Rohland points out.

“Because everyone has a different journey that they’re on.”

On the other side of town, The Juice Bar provides another approach. Instead of a selection of supplements, they have doctors right next door at Affordable Healthcare, as well as a medical spa. With a much smaller kitchen, The Juice Bar’s menu focuses on juices and smoothies, with different wraps making an appearance every month.

“Our most popular juice is probably the Alkalizer, followed by the Energizer and May River Sunrise, but they’re all extremely good,” Brittany Yeager, the manager of The Juice Bar, reveals. “Smoothie-wise, Berry Beneficial, Vita-man and Strength tend to be on top.”

Is juicing good to the core? 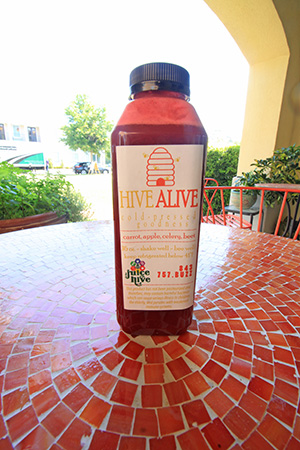 With names like Beet Smart, Immune Booster, Garden Detox, Happy Heart and Energizer, juice bar menus can easily convince customers that they’re just what they need to fix these problems. But are they?

“A variety of people will walk in here and sometimes people are deficient or hurting in some way, while others are just looking for general health,” explains Zachary Moore at The Juice Hive’s Health Emporium. “In both cases, nutrition, and in some instances herbs, can be very helpful to nudge people in the right direction. But they still have to get sleep, exercise and manage stress.”

While recent studies—“Fruit and Vegetable Juices and Alzheimer’s Disease: The Kame Project,” “Effects of one week juice fasting on lipid metabolism: a cohort study in healthy subjects,” “Health effects of mixed fruit and vegetable concentrates: a systematic review of the clinical interventions” and “Can pure fruit and vegetable juices protect against cancer and cardiovascular disease too? A review of the evidence”—have shown that juicing promotes weight loss and skin health, boosts your metabolism and immune system and delays the onset of Alzheimer’s disease; but it does not cure these things or work alone.

The reason juicing has come to tout all these health benefits is simple.

Vegetables contain the  nutrients our bodies need. Of course they’re going to help your health!

“You probably don’t realize how much vegetables or fruits you’re getting in one particular juice. It’s a lot,” says Yeager. “For  a quart of carrot juice, which is 32 ounces, we have to use maybe 15 or more carrots, depending on the size.”

In the United States, more than one-third (78.6 million) of adults are obese, according to a 2011-2012 study in the Journal of the American Medical Association. The majority of people aren’t getting the vegetables they need on a daily basis and if juicing helps, then it’s definitely worth  a try. Especially since eating more veggies is dietary advice everyone could use.

With every good thing, there are potential evils and juicing is no different. If you’re planning to make it a regular regimen, then be wary of what’s in your cup. Adding an abundance of fruit adds up calories from simple sugars. Plus, the acid from fruits can also result in tooth damage.

Several doctors have debunked detoxes, saying they’re a clever marketing strategy that doesn’t deliver. In a 2016 New York Times article, Dr. James H. Grendell, the chief of the division of gastroenterology, hepatology and nutrition at Winthrop-University Hospital in Mineola, New York, explained that people are interested in detoxing but don’t know what they need to rid themselves of and don’t realize that the body is designed to eliminate the toxins that shouldn’t be there.

Remember that jogging and juicing should go hand in hand. Drinking juices doesn’t automatically make your lifestyle healthy, but it is a good first step. It’s never too late to trade that shot of whiskey for wheatgrass!