The beautiful Carolina jessamine vine spreads its perfume and color all over the South. 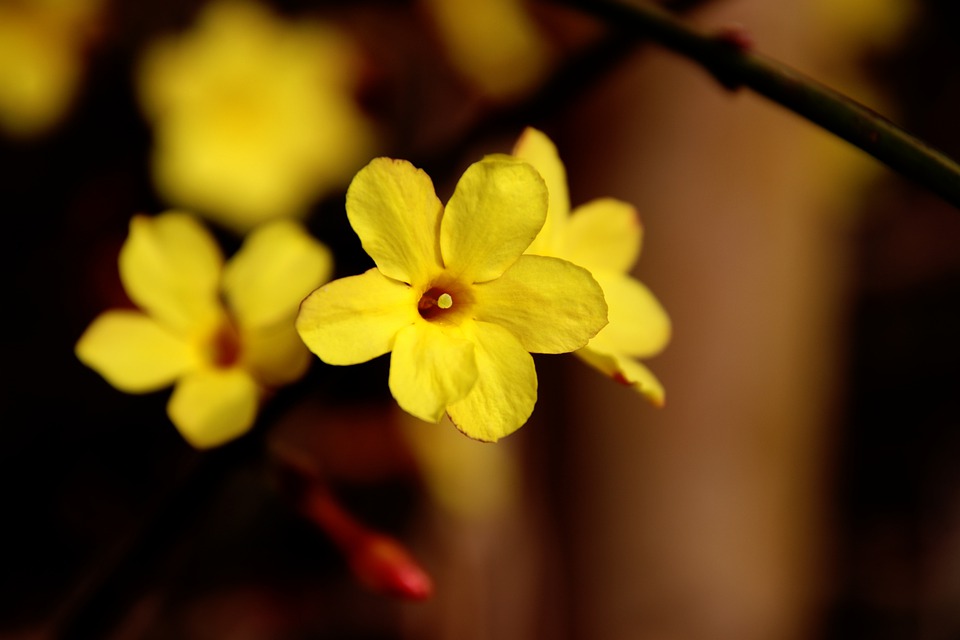 Its bright yellow flowers drapes itself over forest, rural and urban areas. And, it just happens to be the state flower of South Carolina. It is known by many different names and spellings, including confederate jasmine, southern jasmine, star jasmine, confederate jessamine and Chinese star jasmine.

Carolina jessamine grows up to 10′ high and grows easily.

When the plant encounters a wet surface, it emits aerial weed roots. It also grows or twines, by surrounding a support structure, be it natural or man made. If cut, they exude a white latex, resembling sticky milk. Young twigs become smooth with age. The oval-shaped leaves flank the twigs. Dark green in summer, the leaves turn bronze in winter.

The fragrant flowers are tube-like, opens into five petal-like lobes. The vine is evergreen, with the dark-green foliage cast a slight yellow or purple hue in winter. The slender fruit contains numerous seeds. The Carolina jessamine can be highly toxic to dogs and humans. Sucking nectar from the flowers, which appear similar to honeysuckle, can be poisonous, and dogs that eat any part of the plant are also at risk.

Carolina jessamine  is great for gardens, public landscapes, and parks as a climbing vine or ground cover. Potting the plant for a patio or terrace is a great way to have that fabulous fragrance when blooming. It flowers in full sun, partial shade, or total shade, and requires well-drained soil. If constantly damp, it may succumb to fungal infection. It requires only moderate watering and fertilizing.

It is debated where a common name for this plant, confederate jasmine, comes from.

While some dictionaries suggest that the name comes from the plant’s common cultivation in the southern United States, others argue that the term actually comes from Malaysia, and the former Malay confederacy. It gets another of its common names, trader’s compass, from an old Uzbekistan saying that it pointed traders in the right direction, provided they were of good character.

A valuable perfume oil is extracted from the steam distilled or tinctured flowers and used in high end perfumery. In a dilute form, tinctured flowers are much used in Chinese, Vietnamese and Thai incenses. The stems produce a fibrous material from the phloem of a plant.