Here are some scientific facts about Bluffton that you may not know. 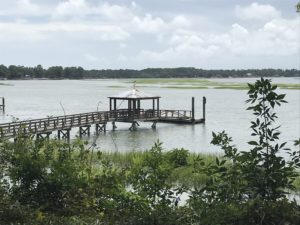 Bluffton was once mostly wetlands, many of which were drained possibly during the antebellum era. Agriculture and pine timber harvesting contributed to the landscape still present today. The town proper consists of five primary areas. The historic district of Old Town, on the northern bluff of the May River; Palmetto Bluff, located on the southern side of the May River; Jones Estate, situated along the New River; Buckwalter, located on the northwest side of town; and Shultz Tract, north of Old Town. The May River winds through the center of town. The New River forms the southwest boundary of the town.

The town of Bluffton has a total area of 54 square miles, of which 52.2 square miles is land and 2.2 square miles is water. Bluffton is the fifth largest municipality in South Carolina by land area. The municipal boundary contains many large “doughnut holes” of unincorporated territory due to South Carolina’s strict annexation laws. Most of Bluffton’s land remained undeveloped land until the housing boom of the early 2000s. The Bluffton area’s growth exploded. As of 2012 many of these developments remain only partially complete due to the economic downturn.

Bluffton has a humid subtropical climate, with very mild winters, hot, humid summers, and significant rainfall all year long. August is the wettest month; almost half of the annual rainfall occurs during the summer months in the form of thundershowers. Fall remains relatively warm through November. Winter is short and mild, with occasional rain. Snow flurries rarely occur. The highest temperature recorded was 107 °F, in 1986, and the lowest temperature recorded was 4 °F on January 21, 1985. Hurricanes are a major threat to the area during the summer and early fall but there has not been a major hurricane event in Bluffton since the Category 3 Sea Islands Hurricane in 1893.