Search
HomeBlog ArticleBirds of Bluffton: The Trifecta, A Raptor and Comic Relief

THE TRIFECTA OF BIRDS

The wading birds I can always count on seeing on the May River are the Great Blue Heron, the Great Egret and the Snowy Egret. I call them the “trifecta” and sometimes all three are on the same bank, as if posing for the passengers aboard my charter boat, Spartina. Although they are similar in behavior and body shape, one is distinctly blue and the other two are white with opposing color on their beaks and feet.

All three have the same feeding strategy—walk slowly in shallow water so they do not scare the small fish congregating at water’s edge. If they are still enough, the fish may seek shelter between their stalk-like legs, which resemble a safe haven of marsh grass! Next thing you know, a sharp beak strikes the fish at lightning speed with perfect aim. This stealth attack is very entertaining to watch and sometimes, as I draw near, I feel like I should use my library voice.

The Great Blue Heron is the largest member of the trifecta. It stands up to four feet tall, has a white head with a black streak behind its eyes and overall blue-grey plumage. Although monogamous during the breeding season, they pick a new mate each year. Mating begins in March and eggs may incubate up to one month. Hatchlings leave the nest after about two months. The Great Blue Heron lives for approximately 15 years, eats just about anything that will go down, hunts and feeds alone and nests in colonies. Thanks to their excellent vision, they are able to hunt in darkness. Frayed, downy feathers on the chest act like a bib, which it constantly preens with a claw located between its toes, removing any oily feathers from feeding.

The Great Egret is the larger of the two white birds and has a yellow beak and black feet. In the spring, the skin patch between the eyes has a greenish tint and lacy breeding plumage appears on both male and female. Males attract females to a nesting site with a dance using these delicate, skirt-like feathers. Eggs hatch in 25-27 days and the fledglings fly at about six weeks. Racoons, owls, crows and snakes may snatch eggs or hatchlings from the nest. This bird can be spotted wading at the water’s edge hunting fish, although it has been known to eat small mammals, reptiles (baby alligators) and amphibians, as well. Great Egrets were almost driven to extinction by 1900 when their attractive breeding plumage was collected to adorn women’s hats.

The Snowy Egret is the smaller of the two Egrets, and the opposite of the Great Egret with a black beak and yellow feet. I remember it this way, “Don’t walk in the yellow snow…y egret.” During breeding season, lacy plumage appears, the skin near the eyes becomes reddish-orange and their feet become more brilliant yellow. Eggs hatch in about 25 days and hatchlings may leave the nest as early as two weeks later. The Snowy Egret prefers to eat fish and small crustaceans, but also dines on smaller mammals and amphibians. Fish are always eaten headfirst because fins are streamlined in that direction and less likely to get caught in the throat. Snowy Egrets were also nearly decimated by fashion demand.

For the more experienced birders out there, don’t be fooled by the white morph version of the Reddish Egret or the Little Blue Heron’s white juvenile phase. 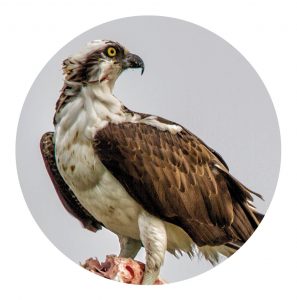 It is a rare day when Osprey aren’t seen on the river, but I will say this…as a child, I saw an Osprey nest on every channel marker, dead tree and powerline—they were everywhere! After graduate school in 2005, I was surprised to come home to a different scenario. Ospreys were just here and there, but I also saw my first Bald Eagle in Bluffton. The American Bald Eagle is the only predator that will attack an Osprey for its catch. Fortunately, the diminishing Eagle population rebounded, and it came off the Endangered Species List in 2007.

Commonly called a fish hawk, the Osprey is the only raptor that plunges into the water after fish. If you have never taken the time to watch, I encourage you to notice the grace with which this bird performs. After the Osprey spots its prey from above, it dives headfirst after it. Before it hits the water, it inverts and plunges, talons (feet) first. The talons capture the prey and the Osprey’s wings are used to swim back to the surface. Once it breaks the surface, it is immediately airborne, shakes like a dog, and rearranges the fish so that it points headfirst into the wind. This makes it more streamlined to carry in flight.

Look for the exaggerated V-shaped bend to the leading edge of the Osprey’s almost six-foot wing span to identify it in flight. Plumage is brown on top and white on the bottom, with a white head and dark slash through the eyes. Monogamous for life, pairs mate each March. They return to the same nests, found on pilings, channel markers and other manmade structures. Eggs hatch in five weeks and fledglings leave the nest as soon as eight weeks. They may live up to 25 years.

I am probably not the only one who observes marine life and anthropomorphizes their behaviors. I immediately see the comical character in their movements and habits, especially the Pelican and the Cormorant, which appear to be slightly uncoordinated. 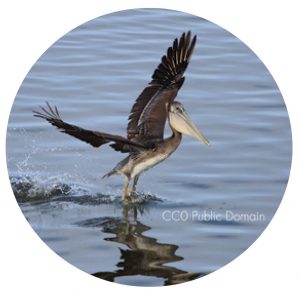 The Brown Pelican has exaggerated features, an oversized bill and short legs that end with enormous webbed feet. It body slams the water from above to catch its prey. Compared to the graceful dive of the Osprey, it looks like a belly flop. The buoyant bird pops to the surface and bobs around in the water, shaking its head as if recovering (it is actually swallowing), and then looks around to see if anyone saw it. It has no fear and will land on the boat to beg for food, or steal it! When observing flocks of pelicans, I swear I see the white-headed adults socializing apart from the brown-headed juveniles—like the kid’s table at Thanksgiving.

Adults are about four feet tall with a six-foot wing span and a bill that is over two feet long. Immature birds have a brown head that turns white as an adult (2-5 years of age). Pelicans feed by plunging their bill into the water from heights of 30-50 feet and filling a gular pouch with fish and water. Water is expelled at the surface. Pelicans’ existence was never threatened because of the harvesting of beautiful feathers, but DDT pesticide almost wiped them out when thin eggshells resulted from ingesting this chemical, which bio-accumulated in fish. Adult pelicans have no predators. Contrary to popular belief, they do not go blind from constantly impacting their lenses on the water. Most pelicans die from interaction with fishing tackle and pollution. The oldest known pelican is 43 years old. 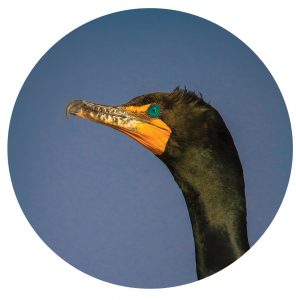 The Double-Crested Cormorant is quite hilarious, as well. Exaggerated breeding plumage (double crest) on their head looks like the pigtails your dad attempted when your mom was out of town. This bird lacks the same amount of preening oil other birds depend on to stay buoyant (think of the expression “like water off a duck’s back”). This adaptation allows them to dive and swim submerged without having to fight to stay down. They also lack nares (nostrils) on their beak, an adaptation to prevent water from entering their lungs on long dives. They capture and swallow fish underwater and open their mouth to breathe after breaking the surface.

To fly, the Cormorant needs a 30-foot runway. They maximize their wings, and their webbed feet slap the water to assist in lift-off. It is a struggle, like an overloaded plane taking off. On one occasion, I observed a Cormorant struggling to get airborne. After two attempts, it gave up and simply swam to the sandbar and walked out of the water.

They are even clumsier on land!

To dry their wings, they hold them out like Batman’s cape. If it is a windy day, they rock back and forth in an attempt to stay upright with wings outstretched. Since they feed strenuously, Cormorants spend a lot of time roosting and pooping. I have noticed the local “Cormorant Congregation” has commandeered the floating docks once connected by boardwalk access. They have been “decorating the floats” for almost a month now. You will smell it before you see it!

Cormorants are dark brown with an orange throat patch and a hooked yellow bill. Up close, you will see their aquamarine eye color. They are sexually mature at 3 years old. Both male and female contribute to nest building and produce three or four pale blue eggs. At six weeks, the chicks mingle with others their age, but return to their own nest to be fed. They will be independent at about 10 weeks. Many are migratory during breeding season, but the year-round population nests near inland lakes in the Carolinas. The longest recorded lifespan of a Cormorant was 22 years.