During that brief window of time between fleeting youth and encroaching senility, I stumbled across online dating. 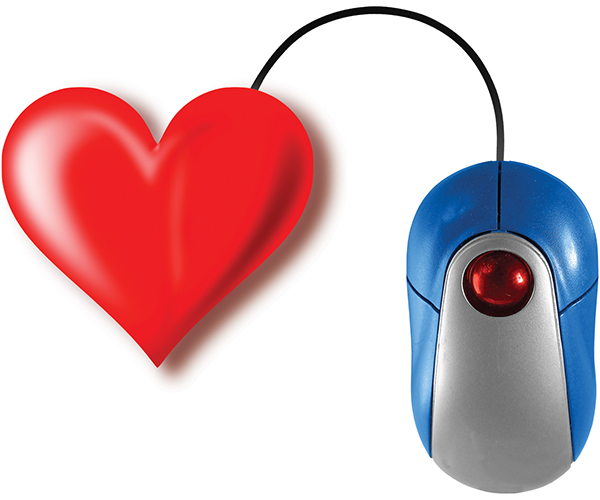 A few online winks and flirtatious messages later, I was hooked. Considered a kind of secret obsession behind closed doors 15 years ago, online dating today has exploded.

I think it is safe to say the stigma is gone, but the learning curve remains. It took me a painful seven years to weed out the seriously flawed from the non-emotionally crippled. Online dating is a learned skill, and the path to success is often riddled with failure, but every no gets us closer to the big yes. I’ve been married to my Big Yes for nine years.

The first few months of plunking around and shopping for men online was similar to that first bitter swig of coffee.

It was distasteful at first, but eventually life seemed dull and listless without it. Several of my friends were so hopelessly entrenched in multiple dating sites, they were exhausted from late nights and romantic escapades. Our exploits were hilarious and, once in a while, horrifying. For instance, when a few of us discovered one of the men trolling online was a friend’s husband, we decided to take a sabbatical and reassess our various states of online dating addiction. The struggle was real.

Perhaps the biggest learning curves were figuring out how to separate fact from fiction in the “tell us a little about yourself” profile box or trusting the photos posted on the profile were actually, um, actual.

Imagine my shock, when I beheld across the table a face so etched with age it looked more of a Shar-Pei than the photo I’d seen online.

If only I’d had FaceTime or Skype or, even better, YouTube! In Beaufort County, the misleading photo problem could be especially heinous, since the over-50 population has steadily grown since 2010 and, of those, a large percentage of over-age-50 single men and women are looking for Lowcountry love. If you are in this age group, you might want to FaceTime before scheduling a meeting. Studies show both women and men lie about their age on dating sites.

A brief scan of the area’s most popular websites revealed thatactive dating sites in the Lowcountry are as plentiful as oysters in the May River. One in particular got right to the point with a huge, featured photo of a hopeful romantic prospect topped by two prominent boxes. One box had a green checkmark and a big YES, the other a red X and a big NO. In a nanosecond, one was able to bypass a profile based solely on appearance. Seriously? Isn’t there enough instant rejection in the world already?

In an effort to sidestep too much emphasis on outward beauty and embrace inner depth, intelligence and personality, I offer a few suggestions for the all-important First Meeting.

1) Tuck a good pair of running shoes in your purse. Should the candidate be embarrassing or bizarre in any way, discreetly escape to the ladies’ room. Put on that pair, and run.

2) Be prepared for prolonged non-verbal assessment of your romantic prospect because, as all women know, men love to talk about themselves. You will probably not get to talk at all. Maybe later.

3) Wear something loose-fitting to hide your curves, and add nerd-glasses. This way, you’ll know if the man is really interested in you, the woman; or just that sexy photo you posted online, thus weeding out the more shallow and insensitive candidate.

1) Ask the woman a few questions about herself. Look straight at the woman’s face (and only her face) as she answers. Act like you are interested in what she has to say. This goes a long way, I promise.

2) Try not to sling back those Happy Hour drinks too quickly, unless you already know the situation is hopeless. In that case, go for it.

3) If you live with your mother, or your grown kids, save this information for the third or 10th date. Ditto, if you don’t have a job or sufficient retirement income.

Written by Kerry Peresta, a suspense novelist and humor columnist who lives on Hilton Head Island.