He named it Palmetto Bluff Plantation. Originally from Tennessee, Wilson had been the Commissary-General of the Confederate Army of the Confederate States of America. After the war ended, he moved to New York and continued a very successful career as an investment banker. He is believed by some to have been the model for Margaret Mitchell’s character, Rhett Butler, in her novel, “Gone with the Wind.”

RT, as R. T. Wilson, Jr., was called by his friends and family, was a great lover of fine horses and devoted much of his life to raising and breeding race horses on his farm in Kentucky. He was part owner of the Saratoga Race Track in Saratoga, NY, and, as president of the Saratoga Racing Association, was always present during the annual racing season.

RT’s horses won many races during the 1910s and 1920s. He owned beautiful homes in Newport, RI, New York City and Saratoga, as well as the 72-room mansion he built on Palmetto Bluff Plantation in 1916. Sadly, that beautiful showcase home burned to the ground in March of 1926. RT was devastated and soon thereafter sold Palmetto Bluff.

Our individual lives are often linked in fateful ways to other people’s lives.

My grandfather, H. G. Rubert, was R. T. Wilson, Jr.’s private secretary and nurse from 1909 until RT’s death in 1929. “Rubert,” as RT and many others called my grandfather, became the general manager of RT’s domestic affairs and, in 1929, the executor of Wilson’s estate. If it had not been for my grandfather’s professional relationship to R. T. Wilson, Jr., and the Palmetto Bluff Plantation, my mother, Florence Lillian Rubert, would never have met and married my father.

In the late 1930s, she returned to the Bluffton/Palmetto Bluff area where she had known much happiness as a child. In 1939, she married John Samuel Graves, Jr., then the owner and operator of the Bluffton Seafood Co. (now called the Bluffton Oyster Factory).

He took many photos of the Palmetto Bluff Plantation between 1910 and 1926. Some were very early color glass slides, some were shot using a panoramic camera and others with 120 Kodak film and cameras. He took the photographs shown here, including the great fire that destroyed the mansion.

Look for Part II of “A Short History of Palmetto Bluff Plantation” in an upcoming issue of The Bluffton Breeze. For more information on the Graves family and their legacy in Bluffton, visit graveshouse.org.

Florence Rubert Graves wrote many poems about Bluffton. Her poem “No Mo’ Robert” was written about a Negro funeral on Palmetto Bluff. Her Bluffton poems can be viewed on graveshouse.org. To view the songs of John Samuel Graves, III, composed using his mother’s poems as lyrics, visit astarfell.com and jsgraves.musicaneo.com. See the August 2015 issue of The Bluffton Breeze for his article about his father, “Boll Weevils and Oysters”.

Article written by John Samuel Graves, III. Photography by H. G. Rubert, circa 1910-1929.  All of the photographs in this article are copyrighted by Gerald B. Graves. 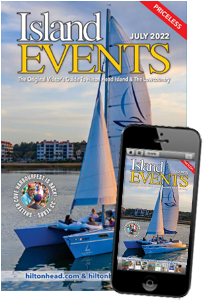