A state with a strong martial tradition, South Carolina provided as many soldiers for service during World War I. With America’s entry into the war in 1917, the state once more underwent a mobilization of manpower and resources of titanic proportions.

As the United States entered the great European war, the nation formed unprecedented alliances with European powers and took on a new and daunting role on the world stage. For the state of South Carolina, the federalization of its National Guard and the state’s commitment to the national war effort were drastic steps marking a shift of perspective from regional to international affairs.

During the Punitive Expedition, the state volunteer system was employed for the last time, with each state’s troops serving in their state militia regiments. When the same troops were called up for World War I, they would be reorganized, their units redesignated and made part of the regular army.

Upon their return from the border intervention, South Carolina’s citizen-soldiers soon found themselves preparing for deployment to France. When war with Germany started in April, South Carolina’s troops served for the defense of the state. That summer, however, federal service summoned them. In the reorganization that followed the activation of the National Guard for federal service, the 1st South Carolina Regiment became the 118th Infantry. Assigned to the 30th (“Old Hickory”) Division, the 118th would become one of the most distinguished regiments of the American Expeditionary Forces (AEF).

Activation of the National Guard on July 25, 1917 doubled the size of the U.S. Army, but even this expansion was insufficient to realistically affect the course of the war in Europe.

Another more controversial policy followed: the national draft. For the first time since the desperate days of the Confederacy, South Carolina men were subject to conscription. Draftees were organized into the national army, distinguished from both the regular army and the National Guard. This national army also included the segregated troops of the 93rd Division, composed primarily of African-American South Carolinians in the 371st Regiment.

South Carolina citizens served in great numbers in many other units, including the 81st (“Wildcat”) and 42nd (“Rainbow”) Divisions. They served among the U.S Marines and Navy sailors serving overseas, as well.

More than two million black U.S. males between 21 and 31 registered for conscription. Even though they represented 10 percent of the total draft registration, there were only four “Buffalo Soldier” regiments in the U.S. Army to take in these new soldiers, and none of those regiments were slated for AEF service. With some reluctance, the U.S. War Department agreed to create the 93rd Division in the national army.

The 93rd Division contained four regiments: the 369th, 370th, 371st and 372nd. The 371st formed at Camp Jackson in August 1917, mainly of 93rd Division draftees. The 371st, unlike the other regiments, consisted mainly of African-Americans from across the South.

Upon arrival in France, the 93rd Division’s regiments found themselves “on loan” to America’s allies. Starved for replacements and long accustomed to employing African colonial troops, the French army eagerly took in the black American soldiers. American commanding General “Black Jack” Pershing, whose nickname referred to his Buffalo Soldier service in the Spanish-American War, agreed to this arrangement, perhaps to help mollify the French demand for recruits.

Men of the 371st received the French Legion of Honor, the Medaille Militaire and the Croix de Guerre with Bronze Palm. They sailed home in February of 1919 aboard the SS Leviathan. 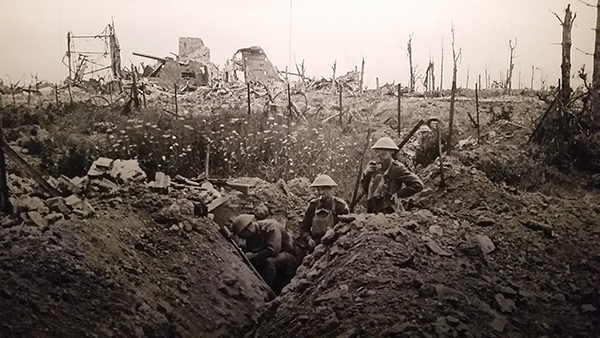 In France, great lines of fortification dug into the earth. Armies maneuvered in small spaces constricted by artillery and swept by machine gun fire. Thousands of lives might be expended for a gain of a few hundred yards of territory, a gain that was quite likely to be temporary, as the enemy regrouped in a further line of entrenchments to mount a counterattack.

The infantryman of the late 19th century relied on his rifle to march into battle. But in this environment, the machine gun dominated long-range fighting and the line tactics of previous generations were suicidal. Trench raids, on the other hand, often devolved into pistol and hand grenade contests where a “trench sweeper” shotgun could prove superior to more conventional long arms. At any range, Western Front fighting was a brutal contest of attrition. It settled into a deadlock that the American Expeditionary Forces would help to break.

Adding to the danger and misery was the constant threat of attack by poison gas.

Gas warfare originated as an attempt to break the deadlock in the trenches. Soon became just another horrific feature of life on the front. First Sergeant Joseph Etheredge, who served in South Carolina’s Field Hospital Number One (119th Field Hospital, 30th Division), graphically described the effects of a gas attack:

“In being gassed by Mustard Gas, your throat commences burning, like swallowing red-hot lead. Your eyes commence burning and swelling shut as if a hive of bees had stung you. Your voice goes from you till you can scarcely whisper. Then, a tremendous pressure hits your chest as if there is a weight of from 50 to 100 pounds ther. It was about five weeks from the time I was gassed before I was able to turn over. And, in fact, it was about Armistice Day when I began to sit up a little.”

World War I would see the first large-scale use of aircraft for military purposes. Used at first for reconnaissance, the aircraft soon found other roles as well. As the use of aircraft proved advantageous, control of the skies was contested and the romanticized “Flying Aces” in their swift fighter planes attracted public notice. Meanwhile, the less glamorous reconnaissance flyers provided vital intelligence to the commanders on the ground, proving the worth of the airplane permanently. By the time American troops arrived in France, aircraft were a major component of wartime strategy on both sides.

Although the machine gun is the weapon most often associated with trench warfare, actually the massed artillery of the Western Front caused the most casualties. The role of artillery in the First World War is difficult to overemphasize, both in its direct results and in the demoralizing effect of continuous bombardment.

Sophisticated techniques isolated enemy units and prepared the ground for infantry advances. Storms of high explosives unleashed by the big guns of the battlefields drastically altered the landscape. The artillery also delivered the gas attacks. This was yet another innovation to break the bloody stalemate of static trench warfare.

Many Allied military planners anticipated the continuation of the Western Front stalemate well into 1919. American troops began the war on the defensive as the German army attacked. However, the German army, weakened by four years of war, was more vulnerable than it appeared. The American troops would soon provide critical assistance in bringing the long, bloody conflict to its conclusion.

The Allied “Hundred Days Offensive” in the autumn of 1918 finally collapsed an important section of the German defenses. The South Carolina’s soldiers were in the forefront with a historic assault on the Hindenburg Line. This 100-mile-long trench system across northeastern France had concrete bunkers, barbed wire, minefields, interlocking machine gun positions and tunnels. This allowed German reinforcements to move to threatened sections in relative safety.

In an attack that lasted from September 18-October 5, 1918, British, Australian and American forces broke through. They cleared the entire Hindenburg Line. With its defenses fatally breached, Germany acknowledged defeat. The war ended with the signing of the armistice a month later. South Carolina soldiers were in the forefront of this historic assault. Soldiers of the 30th Division, including the 118th Infantry Regiment, won particular praise for their part in the battle.

These heroes helped drive the final advance that forced an armistice and an end to World War I.

South Carolina’s Adjutant General Moore expressed a common hope in his annual report for 1918. He said that the year “will go down into future history of the world’s greatest war.”

Certificates issued by President Wilson would acclaim America’s “Great War” soldiers as “The Chivalry of a New Humanity.”

The surviving soldiers returned to their homes with hopes for a lasting peace.