The place where seagulls squawk overhead in the salty air, crabs scurry along the seashell-speckled sand and through muddy Lowcountry marshes, where the deer dart back into the forest upon meeting someone new—the sweet Southern Coast where West grew up.

“This region is where I am from, the place I learned to fish and camp, ride horses and drive boats. The place I first kissed a girl and played sports, it is my place of heritage,” West explains.

“As with most artists, my home turf is what I am passionate about. I do not paint this place exclusively, yet a major part of my career, reflected in this new book, is grounded in paintings of this southern coast.” 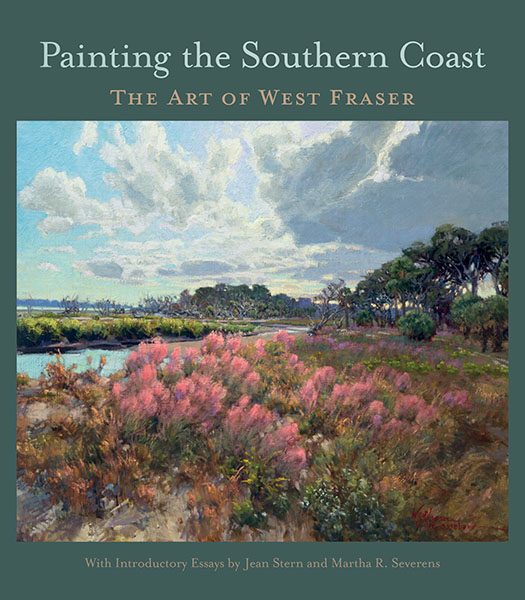 Released in July 2016, his book, Painting the Southern Coast, comes after Charleston In My Time.

As with his last, this new book reveals West’s approach to painting, but it does much more than that, unveiling his “Country of Birth,” his experiences with the land, showcasing a sort of history of the region. It captures the coastline from St. Augustine, Florida, to Winyah Bay, South Carolina, with a collection of 260 works—magnificent scenes painted by West, along with maps, sketches and studies, a short autobiography coupled with introductory essays and poetry peppered throughout the pages.

“I tell the story of how the study of ecology and history has shaped my life’s pursuit in art,” West says, revealing the focal point of his “Artist Talk” on September 15 in Bluffton, which will be paired with a book signing from 5:30 to 8 p.m.

He started with painting watercolors from photographs. It evolved into watercolor on location and then to oil exclusively on location for 25 years. Today, he spends more time in his studio. There, he generates larger, more finished exhibition paintings, using on-location studies and picture references.

“His style is bold, elegant, and filled with light and color. A true master of design, West looks, observes, and takes in what the city reveals and, with a deft sense of movement and verve, qualifies the scene and distills the visual essence,” Jean Stern, executive director of The Irvine Museum in California writes in West’s book.

“West’s colors are gentle and soft, bred in the sultry atmosphere of the South. He does not abuse color for shock value; he coaxes it to do his bidding and spreads its brilliance throughout the painting.”

His paintings fall somewhere between realism and impressionism.

A clear scene depicted, not capturing all the minute details of the scene, but instead the essence of the land and spirit of the place. So it comes as no surprise that individuals within the art colonies at New Hope School in Pennsylvania and Old Lyme in Connecticut—both places where groups of artists gathered and began to establish artwork that focused largely on the landscapes on which they lived—inspired West. This included men such as New Hope School’s Daniel Garber and Edward Redfield and Old Lyme’s Child Hassam, Willard Metcalf and Guy Wiggins.

The 20th century’s California Impressionists—Edgar Payne, William Wendt, Alson Skinner Clark, Hanson Puthuff and Guy Rose—were also a group that inspired West, as they too focused on the natural land around them, unlike many French Impressionists, who preferred to paint city scenes, industrial sights and modern life with attention on human activity.

“I have naturally been interested in a specificity of place or documentation angle,” explains West.

Born in 1955 in Savannah and West moved to Hilton Head Island with his father, Joseph B. Fraser (Charles E. Fraser’s older brother). Hwitnessed the transformation of Hilton Head with the development of Sea Pines Plantation.

This huge transformation is why West seeks to capture the past. That’s what led him to Toomer’s in Bluffton, where he painted the Bluffton Oyster Factory Shuckers.

The response led West to establish The Joseph Bacon and Carolyn Bexley Fraser Sustainable Seafood Harvest Fund. He also gives to the Community Foundation of the Lowcountry to help protect local waterways. “Money raised from the sale of reproductions of the painting go directly to fund conservation programs and efforts. They help maintain the Port Royal Sound Basin and the Calibogue Sound Basin. They promote a healthy ecosystem and viable estuaries for sustainable seafood harvest, today and into the future,” he says.

That’s the heart of West’s work—preservation.

That’s what he’s doing by painting the scenes surrounding his home: preserving memories and saving scenes from a once-present day.

“I paint to give people a window to a world of a place I love and respect,” West reveals. “I also hope my work builds appreciation of this coastal region and beyond.”