The majority of Bluffton residents had only heard about hurricane evacuations, but never experienced one until now. 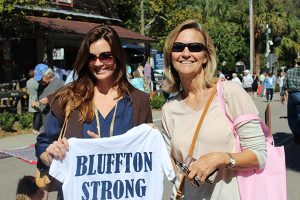 First, I want to thank Governor Nikki Haley for the foresight to get as many residents out of our county as possible. Blufftonians took heed—some right away and many others later—and were able to find lodging in a safe location and ride out the storm. I evacuated during Hugo and know the frustration of not knowing, on a minute-by-minute basis, what is going on with your property. This is why I decided to post frequently on Facebook and other social media during Hurricane Matthew. The response from you was overwhelming and kept me focused on continuing through the night and several days after. 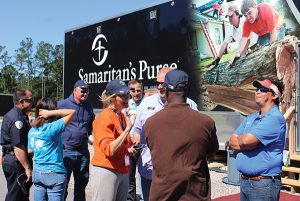 As Mayor, my role was to be accessible to sign emergency documents and authorize funds for storm response.

I was at Bluffton’s Emergency Operations Center in the Bluffton Police Department during the entire storm. Bluffton Police Chief Joey Reynolds and Town Manager Marc Orlando led their troops throughout the hurricane. These two men never left their staff; working, sleeping and eating beside them, as well as responding to the needs of our residents. They led by example and were able to prioritize responsibilities for themselves and others, around the clock, for nearly 10 days.

As part of emergency operations pre-planning, the Town established a partnership with eviCore (formerly known as CareCore National), where Town staff, police officers, firefighters and some media representatives slept. 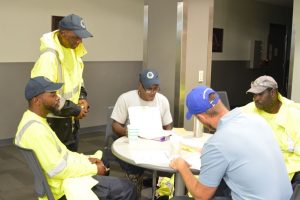 These buildings were built to withstand a Category 4 storm, so all who stayed behind to work were safe. Knowing these first responders could rest in comfort before the storm’s aftermath was heartening to see. However, they were ready to get out and do whatever they could to help our citizens as soon as the OK was given.

They assessed the damage, ensuring residents safety. The amount of dangling power lines and fallen trees on Bluffton’s roadways was heartbreaking. Bluffton’s Historic District was one of many areas that took a beating. Debris and downed trees cluttered the once-charming streets. Riding the streets reminded me of the morning after a snow storm, except the snow was replaced by pine needles and branches along the roadway. It was eerily quiet with no traffic anywhere in sight. That Saturday morning, I wasn’t sure how we were going to return to the town we know and love. 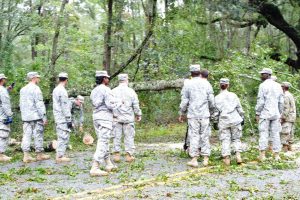 The list of selfless acts is too numerous to list; however, please know the collective support and spirit of the Bluffton community is a treasure which no one takes for granted. If you ever doubt whether humanity is still good, I am here to tell you, it is alive and well. Thank you, Bluffton warriors, for your strength, generosity and actions in helping your neighbors through Hurricane Matthew.. It is my honor to serve this incredible community. I have personally read more than 1,000 emails, texts and social media posts of people’s contributions to our recovery.

To say this has been a humbling and life-changing experience is putting it lightly.

Bluffton’s tagline, “Heart of the Lowcountry,” says it all.  October 8, this heart grew 100 times its original size. I am proud to be your Mayor.

I am sure you are asking, “When is this debris going to be picked up?” As this publication goes to press, county trucks are already being seen in Bluffton and surrounding areas. They are picking up storm debris on PUBLIC roads. Our hope is that FEMA will grant us a waiver and allow countywide pickup.