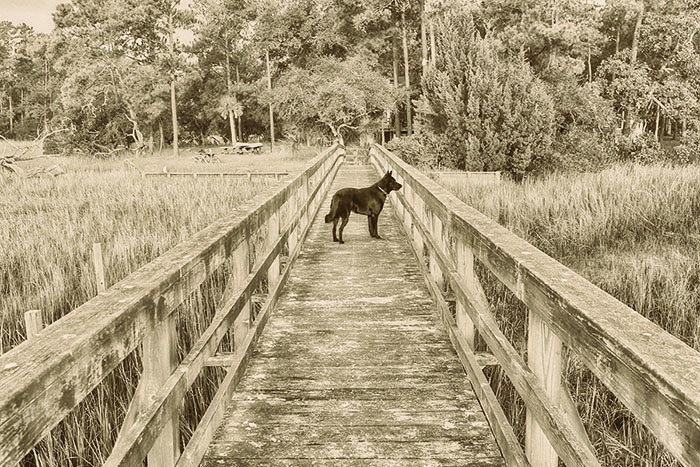 Then I saw him coming from the kitchen steps, not running but ambling, with his big ears flapping against his jaws. It was plain that he wasn’t a full-blooded dog, just an issue of big breeds like German police and shepherd with a bit of something like bloodhound added in. He was moving toward me as though he had all day, and he wasn’t making a sound. But I wasn’t fooled by that. I knew that killer dogs save their strength and put the emphasis on biting not barking.

Well, he wasn’t biting me, unless he could catch me before I made it back to the Secession Oak at the bend of the road.

The lower limbs of that scarred old tree spread out for 40 feet in every direction. The leafy ends almost brushed the ground. A boy could pull himself up on top of one and crawl higher and higher, until he was clear out of the reach of the biggest dog in the world.

Like a boy fleeing to a city of refuge, I turned and ran to that old live oak and got myself safely ensconced 10 feet up in the air. Then I looked back to the gate and watched the dog push it open and head my way, following right in my tracks.

He ambled under the big limb where I was sitting and stopped.

He lifted his head and looked at me with the most doleful expression on his wrinkled face that I ever saw. His bloodshot eyes were filled with a melancholy that was almost painfully sad. But I wasn’t fooled by that, either. If he were sad, it was because he couldn’t sink his cruel teeth into my tender throat. No, he wasn’t fooling me. I could still see the warning sign on the gate. BEWARE: BIG BAD DOG!

I shook my foot at him and tried to scare him off. “Go home!” I said. “Go home!” But instead of going home, he lay down with a lazy groan and rested his heavy head on his front paws. I broke off little pieces of bark and tried to hit him on the nose, and I kept telling him to go home. But it didn’t do any good.

I got myself as comfortable as possible on that gnarly limb. If I had to spend the whole afternoon there, I could do it. The sun was still high in the sky. Nobody would start worrying about me until after dark set in. It occurred to me that Miss Susie might come and rescue me. So I turned my face toward the house and yelled to the top of my voice.

I waited a few minutes, listening for Miss Susie’s voice and watching the gate. Then I repeated the yelling, several times, but it was useless. The only answer I got came from a flock of crows in a nearby cornfield.

He’ll get hungry or something after a while and go back to the house. Then you can hotfoot it back to the post office. Miss Agnes Coe will have to find someone else who wants to make an easy dime.”

I had thought it was going to be an “easy” dime when I agreed to deliver the Special to Miss Susie Verdier. She lived on the bluff beyond Lowden’s oyster factory. A footbridge took you across a cove and right into Miss Susie’s yard. That way her house was less than a mile from the post office. But when I got to the footbridge, a Negro man was repairing it and had it blocked off. I had to turn back and go the long way around by the Secession Oak. And now, after all that trouble, here I was treed by a “big bad dog!”

I hated to have to lose that dime. In those days a boy in Bluffton had to hustle to earn a little cash for spending money. He couldn’t just stretch out his hand and say, “Divvy the dough, Daddy, so I can dig a little rock an’ roll with the other cats,” and walk off with a buck in his pocket. Obtaining as much as a nickel, for a box of popcorn or a cone of ice cream, required work, brains or luck, and sometimes a combination of all three. One didn’t turn down a chance to earn a whole dime, especially when all he had to do was to run to somebody’s house and deliver a Special Delivery letter.

I looked down at the dog.

He was dead asleep. His breathing was heavy, like an old man’s. Every now and then he coughed hoarsely, as though he had a lung ailment of some kind. I toyed with the idea of trying for a quick getaway. I could ease myself down to the end of the limb, slip off to the ground, and sneak into the thick bushes. He might not be asleep at all. He might be playing ‘possum, and just waiting for me to try a getaway. I shuddered at the thought of that big mouth making mincemeat out of my hide. I stayed right where I was.

One hour passed. Two hours passed. Somewhere along in the third hour, when the sun was getting low I heard Miss Susie’s voice and saw her coming through the gate. She was talking fast and stepping high and angry sparks were dancing in her eyes. She was marching straight for the Secession Oak.

The dog woke up. He blinked his eyes at Miss Susie as she approached the tree.

“What are you doing here?” she said. “Who told you to come out of that gate?” She glared at the dog for a moment, then turned her attention back to me.

“You called him, that’s why he came! Are you trying to steal my dog, besides killing my squirrels? Answer me, boy, answer me! You just wait until I tell your father! Come down out of that tree! You hear me, come down!”

I tried to find my voice. I stammered and stuttered and pulled the Special Delivery letter out of my pocket and showed it to Miss Susie.

She picked it up and tore it open. As soon as she read the first line or two, a big smile spread over her face. “It’s another girl!” she cried. “Now I have two nieces! I have two nieces! And thank the Lord this one wasn’t a boy, either!” She finished reading the letter and put it back in the envelope. Her mood was changed and she was no longer angry. She just seemed a little impatient.

“For heaven’s sake, come down, come down,” she said. “We’ll go to the house and I’ll give you some cookies and a cup of tea. Come down, come down. Don’t sit up there like a bump on a log.”
I pointed at the dog, and when I did, Miss Susie shrieked with laughter.

“Well, well, well,” she said, “if that don’t beat the Dutchman. How long has he had you up there? Why, he’s so old he couldn’t tree a rat in a huckleberry bush. And even if he did, he couldn’t bite his toe off. He hasn’t had a tooth in his head in five years.”

Right then I lost my temper and found my voice. “Then how come you put that big sign on the gate?” I demanded with a loud shout. “Oh that?” Miss Susie said. “I just put that there to keep chicken thieves out of my yard while I’m away from home.”