Voodoo is a very important part of Gullah culture.

Getting to the Root of the Matter…

“My introduction to voodooish stuff came via my grandmother, Mama Byrd. Mama was a big believer in signs, potions, spells and such. She was not Gullah or Geechee. She couldn’t have pointed out Haiti on a map. I’m not even sure where her interest or instinctual affinity for such things came from, but it was visceral and omnipresent.”

“The asphidity bag around her neck was always a conundrum to us. A leather pouch about the size of a walnut, we would spy her stuffing it with secret ingredients, presumably medicinal herbs and roots. But to my sister and I, they were magic potions, and probably, knowing our grandmother, black magic.” 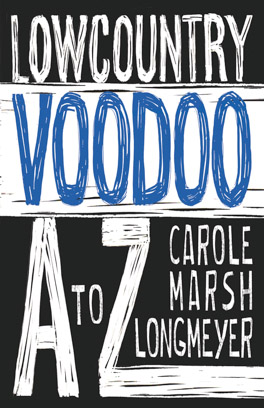 “I spent a lot of time in Savannah as a kid.”

“It all seemed a web of magic and spells, hoodoo and voodoo—long before John Berendt’s blockbuster book Midnight in the Garden of Good and Evil. Later, as a researcher and writer, my bent was toward mysteries and the mysterious. The more I read and learned and witnessed, I became a believer, not in hokey television and movie voodoo, but in the real thing.”

Most folks, the author maintains, swear they put no stock in voodoo, or hoodoo, as it is often referred to in the Lowocountry. “But everyone has attached their keys to a rabbit’s foot, reached down to pluck a four-leaf clover, wished on a shooting star, tossed salt over their shoulder, avoided the black cat about to cross their path, or bought a lottery ticket. We can’t say we don’t believe; we just aren’t sure exactly what we believe in.”

Believe or not, Marsh Longmeyer spent years scouring books on all things related to voodoo.

But the thing that drew her back home every time was the Lowcountry.

“I have a great respect for the authenticity, spirituality and longevity of the voodoo that was brought to South Carolina by the people who would become, for a while, the slaves who grew the cotton, indigo and rice staples. They amaze me with their sincerity, ingenuity and heritage, as well as that lovely, lilting Gullah language. I realized that I had the real voodoo thing right out my back door and I wanted to explore and know more.”

Alligator tooth: Lordy, we have these aplenty in the Lowcountry. A gator tooth is the Southern equivalent of a lucky badger tooth in other parts of the country. You can carry the tooth in a pocket and “feed” it with whiskey, urine, or other conjure concoctions to enhance its power. Alligator teeth are said to be powerful mojos for all kind of gambling, including bingo and the lottery. Since gators naturally shed their teeth, they are fairly plentiful. An alligator foot is another kind of conjure curio, although just how you put your hands on one, I would not want to speculate. It’s also called a gator paw.

Boo hag: A bad spirit, a boo hag uses witchcraft to get a person to do what they want. At night, a boo hag can shed her skin and become invisible. This spirit can “ride” a person by sitting on his or her chest. You will know this from the pressure and the smell of rotting meat. You can sometimes foil a boo hag by putting a broom by your door; she will stop to count the straws, which may take her until dawn, when her powers cease and she has to don her skin once more. (Brushes, sieves, and strainers also work.) It’s also helpful to paint your doors and window shutters haint blue, and to scatter salt around and burn candles throughout the night.

Death: Gullah people believe that your soul leaves the body when you die and returns to God. However, your spirit remains on earth to intercede as necessary with loved ones left behind. Spirits can be good or bad, protective or tormenting. To keep the dead from returning to haunt you, respectful funerals include passing children over the grave, prized possessions left to appease the dead, and broken dishes to indicate that the “chain” of death has been broken.

Ghosts: Also known as “hants” in the Gullah community.

Goofer dust: Graveyard dirt gathered just before midnight, right above the corpse’s heart. For an evil root, go for a Christian’s grave; for a benevolent root, shoot for a criminal’s resting spot. It is advised to take care not to disturb the spirits as you harvest this dirt. Leave a new dime on a grave if you don’t want to be followed home. Also advisable: prayers, or a good cussin’ out. Add sulphur, saltpeter, salt, or sugar to keep the goofer dust active. Other uses for goofer dust include spreading it on your property to keep evil away or inside your shoes so you can walk on evil without picking it up.

Overturned tombstones
Mark the place
Where restless ghosts
Begin to pace.
Who can blame them
Covered with sand,
To wish again
To roam the land
Of beginnings
That they made,
Only now
To haunt a grave.
—Carole Marsh Longmeyer 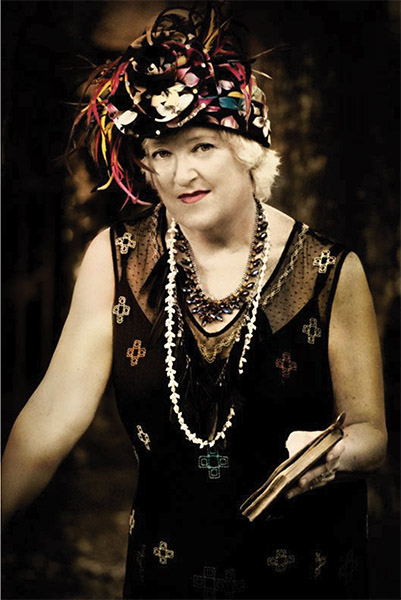 Reprinted with permission. Written by Carole Marsh Longmeyer, a full-time resident of Bluffton, the creator of Bluffton Books and the author of The Kudzu Cookbook. Her next book, Death by Grits, will be released in early 2017. She is scheduled to make an author appearance at the Beaufort Branch Library on October 26 at 11 a.m. For more information on the author, Gallopade International and the Bluffton Imprint, call (800) 536-2438 or visit gallopade.com.