Many have come to the Lowcountry and been enchanted by its golden marshes. 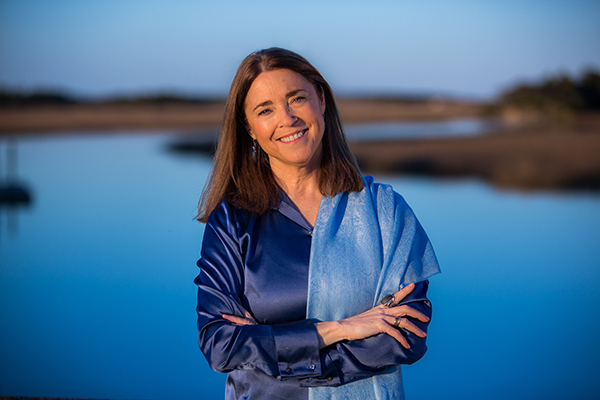 But few have made it their mission to protect and portray this beauty with such far-reaching impact as Mary Alice Monroe.

The bestselling novelist, long known for her sensitive and emotionally compelling portraits of women, found new underpinnings to her life’s work when she moved to Isle of Palms off the coast of Charleston.

“The first thing I did was join the island turtle team,” recalls Monroe.

She visited the area with her husband, child psychologist Dr. Markus Kruesi, for many years. She relocatied permanently in 1999 after he was offered a position at MUSC. “The turtles are what prompted my decision to write novels that would not only entertain, but also have an underlying message to raise awareness of environmental issues.”

Her first book in this vein was The Beach House. It told the story of a woman returning to her roots on the small barrier island. Its release in 2002 kicked off a successful trilogy that told the turtle’s plight interlaced with human drama. It was an effective juxtaposition, one that Monroe would continue to develop in books. She highlights such species as the monarch butterfly and local dolphin.

This month, she releases the latest installment, A Lowcountry Wedding, to great fanfare and the buzz of several exciting local events. A Charleston wedding giveaway has engaged readers nationwide, and Monroe will speak at a book-signing and barbeque event on Nemours Plantation in Yemassee to raise funds for the Beaufort County Open Land Trust. As Monroe’s professional success grows, her commitment to championing nature only deepens.

“I’ve always been involved in conservation,” she says, “but living in Washington, D.C. during the boom years made me see how quickly a natural environment could be destroyed. So coming to this pristine gorgeous place that I loved, I didn’t feel there was enough awareness of that threat.” 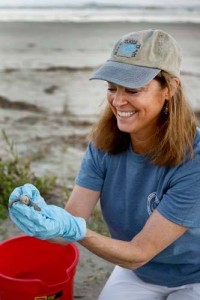 Monroe never preaches, however, as she knows this would only go in one ear and out the other.

Instead, she uses what she calls “the power of story.” By bringing creatures to life and allowing readers to emotionally connect through an engaging plot, she is able to reach a broad audience—including newcomers to the area who might otherwise never take an interest in learning about local flora and fauna—and to unobtrusively bring attention to issues like water quality.

“First I have a species, then I have a story,” explains Monroe. “People love Mamaw, but Delphine is the unique character in this series, the one who is teaching and educating my readers about the environment. I don’t point fingers or tell people what to do; it’s more that through my plots, settings, characterization and my own passion I can familiarize them, give them a painless education.”

She exposes the dangers of feeding dolphins, which “creates a generation of beggars.” This causes mothers stop teaching their young to forage or hunt. The practice results in a surge of emaciated juveniles because they can’t take care of themselves. 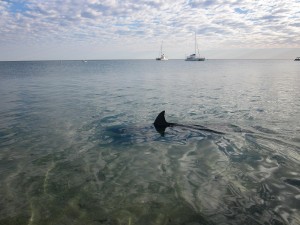 “I knew when I began the series that I did not want to write Flipper,” she says.

“My wish is that through this series readers will come to love and understand the dolphins. I want them to admire them in the wild and as magnificent creatures!”

When Monroe writes of the natural world, it is not only from the head and heart, but also from the hands in a most meaningful way. “I do academic research and roll up my sleeves and become a volunteer,” she says. She spends countless hours with organizations like the Grassy Key Dolphin Research Center.

“I have worked intimately with each species so that when I describe looking a dolphin in the eye, it is at a very personal level. I have seen it, smelled it, done it. That’s a promise to my readers, that what I write will be accurate and authentic. So when they read it, not only will they learn, but they will care. Then I know they will act and be just as fierce about protecting the Lowcountry as I am.”

It is precisely because Monroe puts her message into practice that these efforts have been so well-received.

The positive impact made by her books is tangible and extensive. For The Butterfly’s Daughter, she gave away 10,000 milkweed seeds to be planted as crucial habitat for the monarchs. Since writing the Lowcountry books, readers  say they no longer feed the dolphins that come by their dock. Now they understand the reason behind the restrictions.

“I’ve gotten countless letters,” affirms Monroe, “starting with The Beach House and continuing now. We have records of people volunteering and donating money all along the eastern seaboard because of that book. That transcends storytelling—that is the why of my writing. I began the process to try and make a difference. When I get letters like that it encourages me to keep going.”

For her latest novel, Monroe has chosen to bring forth another timely topic, the phenomenon of Lowcountry weddings, which she experienced when her daughter got married at one of Charleston’s historic plantations.

Monroe examines the lure of this area for couples. the difference between a traditional plantation setting versus. Weddings are all about protocol, tradition, commitment and family values. Monroe says her books raise relevant questions. They depict the perspectives of Mamaw and her evolving granddaughters.