The winds whipped in the North Atlantic in winter, as the Statsraad Lehmkuhl sailed from the U.S. to Norway. 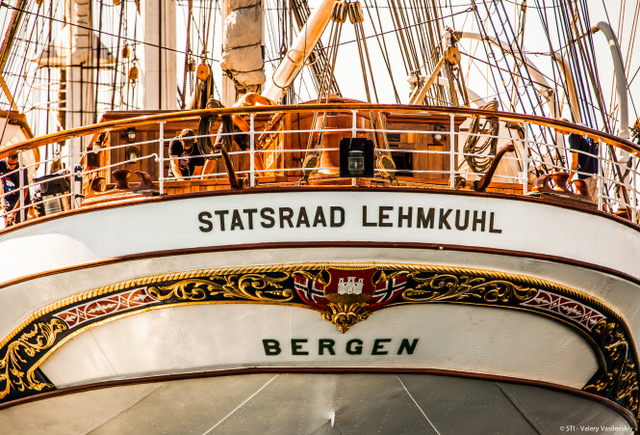 Captain Marcus Seidl and his brother, Chief Officer David Seidl, joined the tall ship’s crew of 20—as well as 150 Norwegian Naval Academy Cadets who were fresh off winning the Tall Ship Races. They were caught in a trough between a high pressure of warm air from the south and low pressure of cold air coming off the North Pole, which created “the perfect storm.”

The Seidls knew how to translate what was happening and registered their position by satellite. They decided not to drop sail in that heavy weather and, 124 hours later, did what no tall ship in written history had ever done: sailed further in that period, 1,516 nautical miles, setting a world record. Captain Seidl said it was a result of good sailing conditions, a talented crew and “some good luck.”

“This is, first and foremost, an incredible feat that we managed to sail so far, so fast,” said Marcus.

As a training ship for the German Merchant Marines during most of World War I, the Statsraad Lehmkuhl was taken as a prize by England after the war. She was purchased from England in 1921 and put into service as a sail training vessel under the Norwegian flag in 1923. The name means “Minister Lehmkuhl,” after the man who made the purchase possible.

From 1939 to 1945, she was confiscated by the Germans. The ship is now back in Norway, funded by a foundation, used as a training sailing vessel for the Norwegian Naval Academy. It set out to sea for cruises and coastal trips for the public. She is the oldest large square rigger in the world, weighing 2,500 tons and measuring as long as a football field, with a main mast close to 15 stories high. It’s interesting to note that she now has a sewage treatment plant on board, as well as a desalination plant and trash recycling, making her a “green ship.”

But, I am getting ahead of myself.

How did they get there in the first place? Let’s rewind almost 50 years, when the Seidl brothers began sailing out of Vancouver, Canada aboard a 63-foot ketch, the Illahee, which their father, artist Albert Seidl, built from the keel up.

Soon after, sailing the Pacific Coast, they made their way to the Colombian port of Santa Maria. The boys, now 5- and 6- years-old, were heralded at each port they stopped as their fame and reputation spread. At port, the evening was clear with a full moon and starry night, as the waves gently lapped against the hull like a lullaby.

Albert suddenly sensed that something was deadly wrong as he heard footsteps topside. When he arose, he was staring at a scar-faced man, with teeth missing, realizing he had a machete against his throat. Pirates! The boys screamed and were held against their will for the better part of an hour, not knowing their fate. As the pirates ransacked the vessel, Albert suddenly heard the sound of machine gun fire. Shouting increased on deck, and his captors ran to escape, some jumping over the side, others into the boats they had come in, two lying dead on the deck.

A Norwegian freight captain in the harbor happened to be watching the ship through his binoculars.

He alerted harbor police, who sprung into immediate action.

After months of sailing around South America, without any run-ins with pirates, Albert and his small crew made another life-changing decision—to sell the Illahee, fly to Europe, find a larger ship and continue their adventures. With Marcus and David in tow, and partner Gerhard Schwisow, they found their ship and worked for close to 2 1/2 years on a little island near the Arctic Circle, rebuilding their tall ship: an 1896 Barquentine, which they named Barba Negra.

For me, having sailed with them on the ship for years, the Seidls became like family. Last November, I journeyed to Norfolk, Virginia to greet the Statsraad Lehmkuhl coming into port after an Atlantic crossing. You could hear the cadets singing shanties an hour away. I visited with them for a week. We spent many an hour reliving stories. Let me share a few.

While rebuilding the ship, the boys loved to climb aboard a small dinghy to go fishing.

Their father was so amazed at how successful they were each time they went out, as they always returned with buckets of fish. After several successful fishing trips, they could not contain their secret any longer: they had found a place where the fish were so plentiful, they were able to scoop them up in the bucket. What a life!

After the Barba Negra was fit for sea, they sailed the Scandinavian and Baltic ports of Northern Europe as a public display and as a floating art gallery featuring their father’s original work. They eventually met Albert’s future wife, Alice, in a Danish port. She became the heart and soul of the crew.

The Seidls accepted an invitation to the Bicentennial Tall Ship Parade in New York Harbor. They decided to make the Atlantic Crossing, with the Barba Negra. It was oldest tall ship in the celebration. Following their stay in New York, they accepted an invitation from the City of Savannah to make the port their home. The Barba Negra became an icon on River Street for more 30 years. Albert and Alice continue to live in Savannah to this day.

Marcus and David would eventually sail and attend navigation school in Europe.

After school, they returned to Savannah to sail, work on the Barba Negra and help Gerhard build docks.

“Our job was to hold the creosote piling still while this big weight was released above our heads to drive it into the marsh bottom,” Marcus recalled. “It was amazing we were never hurt, but no way would we do that today.”

The Seidl brothers decided to move to Norway and sail on the Statsraad Lehmkuhl.  This is when Marcus met his future wife, a Norwegian volunteer on board named Brit Anita.

“I remember the first time I saw her come aboard in Germany,” he said. “She had finished school and her mother encouraged her to take the adventure. She came on board as a nice young girl with cowboy boots. I was sitting on deck sewing sails and had hurt my foot on a boom. So when I got up I was limping. At first, she was not interested. She told her friends about this real nice guy she met, but he had a wooden leg.”

However, it was true love, as the couple has been together for nearly 30 years.

Later, Captain Marcus and Brit Anita married. She sailed with him on board for almost 17 years, fighting seasickness every voyage. Their daughter, Alexandra, was 3-weeks-old on her first voyage. She and lived and sailed aboard the Statsraad Lehmkuhl for many years.

To say that Marcus and David have sailed more miles that Sir Francis Drake is an understatement. They have crossed the Atlantic 13 times in the last 13 years. In his 25 years as Captain, with David as Chief Officer, the brothers never lost a life at sea. They crossed the famed Bermuda Triangle, negotiated 50-foot waves and received recognition by many. These brothers didn’t just dream of what they wanted to do with their lives—they just did it!

Why? “Adventure and the end result,” Marcus explained.

“Every voyage is full of events. Light shows of sunsets and moon rises and the giants of the seas come both day and night.”

People have sailed on the Statsraad Lehmkuhl from all over the world. Marcus and David love training young people and affecting their lives. Every person who walks onboard will come away with a memory of a lifetime.

As an old sailor once said, “We do not live from hour to hour, but second to second, while sailing.”

To learn more about the Statsraad Lehmkuhl, visit sailtraininginternational.org/vessel/statsraad-lehmkuhl/.