Today, golf carts are being used for much more than a round of golf. 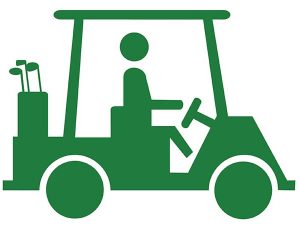 On any given day in Bluffton, we see more and more golf cars joining in parades, at the Farmer’s Market on Thursdays, at our many festivals, out shopping or at shows, in the school drop off line, at work, while dining out or visiting friends—even our police department has them. Half of the time you see dogs riding through Bluffton on golf carts, with their ears flapping and a smile on their face or sitting dutifully waiting on their master. Not in New York!

Many new buyers are putting the cart before the course and using them localIy. Think of the gas saved, not to mention all the free parking spaces. Imagine Old Town with designated golf cart parking and being able to put seven carts in the place of two parallel car spaces.

Although motorized carts didn’t come into public use until the 1950s, they were invented in 1935.

Lyman Beecher, an electrical engineer from Clearwater, Florida, put together a contraption that looked like a rickshaw with two wheels and a seat that required two caddies to pull it. Beecher used it at his summer home at Biltmore Forest Country Club in Asheville, North Carolina, because he didn’t think he could walk the hilly course. Five years later, Beecher modified his design, creating a four-wheeled cart powered by electricity. However, one problem was that six car batteries were needed for the power to last 18 holes. 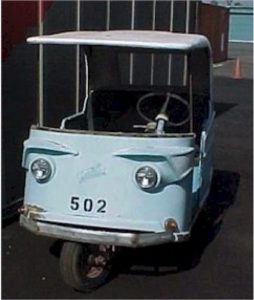 After World War II, Texas oilman R.J. Jackson applied for and received the first United States patent for a golf cart called the “Arthritis Special.”’ He designed the three-wheeled, gas-powered vehicle so older golfers could continue playing the game. According to 1956 article in “Popular Mechanics,” the golf cart had gained wide acceptance by the mid-1950s, with several manufacturers—including Victor Adding Machines and Sears and Roebuck—producing carts, most of them electric.

Other companies soon followed suit, such as E-Z-Go in 1954, Cushman in 1955, Club Car in 1958, Taylor-Dunn in 1961 and Yamaha Golf Car in 1979. Max Walker created the first gasoline-powered golf cart called “The Walker Executive” in 1957. This three-wheeled vehicle was shaped with a Vespa-style front end and carried two passengers and their bags.

Mass production of electric carts began after World War II, but the early models were not very reliable.

Many times, they suffered from battery failure and had to be recharged after nine holes. In 1951, the Wonch Battery Company of Michigan, developed a battery which lasted between 18 and 27 holes on a single charge. In the 1980s, an electric cart could go about five 18-hole rounds without recharging. Today, the average electric cart will operate for 100 holes before it needs to be charged. On the other hand, gasoline-powered carts have a five- or six-gallon tank and need to be filled about once a week, if you like the noise and smoke.

In 1963, the Harley Davidson Motor Company began producing golf cars. They manufactured thousands of three- and four-wheeled gas and electric vehicles that are still highly sought after by collectors worldwide. In 1982, Harley Davidson sold the production of golf cars to the Columbia Car Company.

Prior to LSVs, golf carts had a history of injuries and fatalities…thus they must stay on specified local roads and not be out after dark. The Villages in Florida has over 80,000 carts. In the last six years, there have been 24 fatalities, all caused by ejection.

A study published in 2008 by the American Journal of Preventive Medicine, estimated 148,000 golf cart-related injuries between 1990 and 2006.

Many were rear seat passengers, and most all had two-wheel  brakes  instead of four-wheel. More than 30% of golf cart-related injuries involved children under the age of 16. In the 1950s, there were approximately 1,000 carts in use. Today there are more than two million in America, so the number of injuries is increasing.

South Carolina is one of the first states to permit Low Speed Vehicles on streets with a speed limit of 35 mph or under and at night. However, a valid driver’s license is required for golf carts and LSVs. Low Speed Vehicles are a growing trend, and not just for safety reasons. See SC Code § 56-2-100 (2012) Conditions for operation on street or highway for details.

Now, let’s compare some of the differences between LSVs and golf carts. They both have a horn, headlights, taillights, brake lights and a parking brake, factory standard. State-approved LSVs must have emergency flashers and light, three-point seat belts, a third brake light, illuminated speedometer and odometer, DOT-approved tires and windshield, wipers, amber reflectors on the corners, able to go at a minimum speed of 21 mph and maximum speed of 25 mph (golf carts only go 19.9 mph), driver and passenger-side external mirrors and a VIN number for licensing.

You will also find models that have a steel roof frame, anti-sway bars, turn signals, two speed switch, larger tires with custom wheels and batteries that last 40+ miles versus 20 miles for the old golf carts.

If you haven’t seen a LSV yet, stop by 3-D Golf Car to check out the Tomberlin. You won’t believe the innovations and safety features, not to mention the innovative design and comfort. They also do customizing and almost all repairs, as well as battery sales and service. They will pick up and deliver your cart for most any repair and can also pimp it out for you. Drive Safe! Call (843) 815-2203 or visit  threedgolfcar.com for more information.