From the moment he saw the horse, General Lee took a special shine to Traveller. 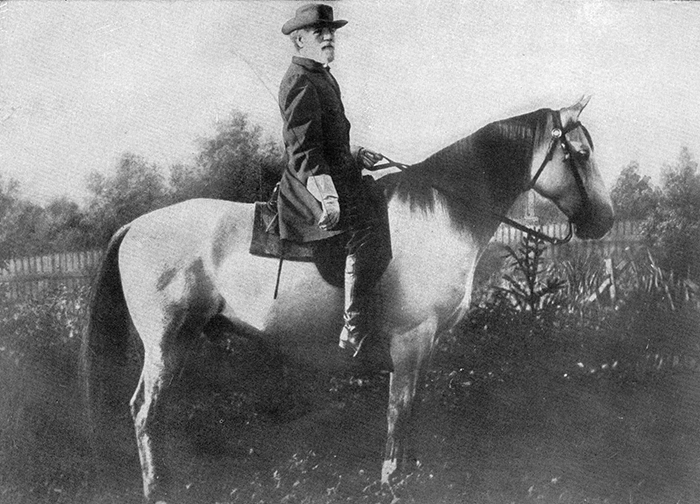 There was nobility there. His fine proportions and a lustrous coat, regal carriage and a fancy step, proud spirit and intelligence shone in the creature’s eye. The star of fortune hung over this horse as surely as it did over Robert E. Lee himself.

The year was 1861 and Lee was in the mountains of West Virginia commanding a small Confederate force that would suffer defeat in the Battle of Cheat Mountain; his mistakes earned him the embarrassing nickname of “Granny Lee” because people thought he was afraid to shed blood. He had yet to rise to fame as one of the most iconic American military leaders in history. But back on those rough hilly roads, he happened to encounter Captain Joseph M. Broun, quartermaster of the 3rd Infantry of Wise’s Legion, mounted on a steed that Lee correctly predicted would become his own before the war was out. It proved one of the most important happenings of his career, not from a martial standpoint, but in terms of popular history, because Traveller would go on to become the most celebrated animal of the Civil War.

Sired by the 16-hand Kentucky racehorse and born to a mare at Blue Sulphur Springs, Virginia, the young colt showed potential.

His fine breeding presented itself early on by taking blue ribbons in the county fair. His original owner named the horse Jeff Davis after the Mississippi senator who would become President of the Confederacy; but when Broun bought the horse for military service he renamed him Greenbriar. Broun’s brother, Major Thomas L. Broun, recalled that Greenbriar was “greatly admired in camp for his rapid, springy walk, his high spirit, bold carriage, and muscular strength. He needed neither whip nor spur…such vim and eagerness did he manifest to go right ahead so soon as he was mounted.”

Everybody loved that horse. But he was destined for greater glory than just being the subject of a lot of big talk. Lee had started calling him “my colt,” and spoke words of pleasant praise every time he crossed paths with Broun. Before he had an opportunity to acquire the horse, however, Lee was sent on orders to the Palmetto State.

His assignment was to organize coastal defense along the seaboard of South Carolina, Georgia and Florida, which included the construction of earthwork fortifications that can still be seen at places like Frampton Plantation in Yemassee. General Lee’s troops built a gun emplacement there that was crucial to protecting the Charleston-Savannah rail supply line during the 1862 Battle of Pocotaligo; grassy mounds under the trees out back are all that remain of this fortification.

Captain Broun’s company was also transferred to the Lowcountry and. As fate would have it, he met Lee again at Pocotaligo.

Immediately recognizing “his colt,” the general still showed such a fancy for the horse that the junior officer realized he had little choice but to offer it up as a gift. Lee declined, saying he would gladly purchase the animal fair and square provided he could first try him for a week to “learn his qualities.” Broun agreed, Lee took the horse, and when he sent it back with a cordial note saying it suited him if Broun cared to sell, that sealed the deal. Broun let Greenbriar go for the same price at which he purchased him: $175, or approximately $4,500 in today’s currency, but the General added a tip of $15 to compensate for the depreciation of Confederate money.

Not long after, Lee rechristened the horse Traveller (spelled with double “L” in good British style) as a tribute to the quick and untiring gait that could easily cover 40 miles in a day, and which would go on to carry him faithfully through the war and even his last days on earth.

The general once lent the horse to his son, Robert E. Lee, Jr., for a 30-mile journey to Fredericksburg. In his 1904 memoir, Lee, Jr. recalled that although he was quite proud of his steed. He felt it was a high compliment to be allowed to ride him. Quite possibly his father “wanted to give me a good hammering before he turned me over to the cavalry.” The horse kept up a short, high step—he called it a “buck-trot”—for the entire 30 miles, forcing Junior to admit he was out of his league. “Though young, strong, and tough,” he wrote, “I was glad when the journey ended. I think I am safe in saying that I could have walked the distance with much less discomfort and fatigue.”

Even the general himself occasionally fell victim to Traveller’s hot temperament. This occured at the Second Battle of Bull Run. Traveller spooked and threw his master down against a stump. Lee broke both hands and finished out the campaign in an ambulance, or with a courier leading his horse. But, more generally, Traveller was noted for bravery and, at times, soldiers had to literally surround him and grab the reigns to keep him from plunging ahead with their commander onto the front lines of battle.

There was no denying the two had a special bond, which persisted long after the war.

Lee continued to take jaunts on Traveller in his retirement, often accompanied by his daughter Mildred. In an anecdote recounted by Mrs. S.P. Lee to Lee, Jr. for his book, the general rode down to a boat landing one day where he tied Traveller to a post. Lee was bidding farewell to a young lady departing on a canal-boat when somehow the high-spirited Traveller got loose. Mrs. Lee recalls:

“Sure enough, the gallant grey was making his way up the road. His speed increased as a number of boys and men tried to stop him. General Lee immediately stepped ashore, called to the crowd to stand still. Advancing a few steps, he gave a peculiar low whistle. At the first sound, Traveller stopped and pricked up his ears. The General whistled a second time. The horse with a glad whinny turned and trotted quietly back to his master. Lee patted and coaxed him before tying him up again. To a bystander expressing surprise at the creature’s docility the General observed that he did not see how any man could ride a horse for any length of time without a perfect understanding being established between them.”

In his final years, Lee served as President of Washington College in Lexington, Virginia, where he was revered by students and colleagues alike for his dignity and accomplishments. Traveller was allowed to graze about the campus, but so many star-struck students stole hairs from his mane and tail that Lee complained in a letter to his daughter, “He is presenting the appearance of a plucked chicken.”

In the fall of 1870, Lee suffered a stroke and died two weeks later.

For the funeral procession, Traveller was saddled up and decked out with black crepe. He led along behind the ammunition cart bearing Lee’s casket. Within a year, Traveller stepped on a rusty nail and contracted tetanus. He was shot to end his misery.

He was buried by Lee Chapel at the college. Later an unknown person dug up the bones and put them on exhibition in New York. A sympathetic admirer paid to have them properly mounted and returned to Washington and Lee University. Despite being displayed in a museum, they were vandalized so constantly by students. Students carved their initials into the bones for good luck. Because of this, the skeleton was moved to the basement of Lee Chapel. It deteriorated for 30 years. Finally, in 1971, Traveller was laid to rest for good. This heap of hero’s bones was placed in a wooden casket and buried a few feet from his master.

The stable where Traveller spent his final days kept its doors flung wide so his spirit may roam free.

When the 24th president of the university violated this tradition, he caught so much flack from the community that he had to have the doors repainted in a color he called “Traveller’s Green,” just so he could redeem himself. Everybody still loves that horse. Pictures of his grave show it all strewn with pennies by his many adoring fans.

Yet nobody loved Traveller more than Lee. In a letter dictated to his daughter shortly before his death, the old general described his beloved war horse.

“If I were an artist like you I would draw a true picture of Traveller—representing his fine proportions, muscular figure, deep chest and short back, strong haunches, flat legs, small head, broad forehead, delicate ears, quick eye, small feet, and black mane and tail. Such a picture would inspire a poet, whose genius could then depict his worth and describe his endurance of toil, hunger, thirst, heat, and cold, and the dangers and sufferings through which he passed. He could dilate upon his sagacity and affection and his invariable response to every wish of his rider. He might even imagine his thoughts, through the long night marches and days of battle through which he has passed.

“But I am no artist; I can only say he is a Confederate grey.

I purchased him in the mountains of Virginia in the autumn of 1861. He has been my patient follower ever since—to Georgia, the Carolinas, and back to Virginia. He carried me through the Seven Days battle around Richmond, the Second Manassas, at Sharpsburg, Fredericksburg, the last day at Chancellorsville, to Pennsylvania, at Gettysburg, and back to the Rappahannock…You can, I am sure, from what I have said, paint his portrait. R.E. Lee”