Married couples remember their first home, but these particular couples also remember yours. 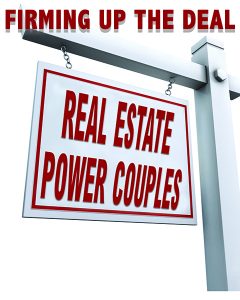 And your neighbor’s, and probably another one down the block. Taking a cue from local real estate professionals Frances and Charles Sampson and Allan and Gloria LaCoe, these powerhouse pairs are venturing out into the risky, yet rewarding, realm of selling real estate together.

When most people think “real estate,” they might think big, expensive homes, stress over transactions and the dollars the agents rake in when a property sells.

Not so for real estate powerhouse pairs Allison Cobb and David Husssey,  Debbie and Daniel Cort or Eric and Hillary Dollenberg. Their focus was flexibility and making more time for their kids. These couples chose real estate so family could come first.

“We were finding with a young daughter and trying to start a family that our existing demands and job requirements were preventing us from committing the kind of time that we felt was necessary to give her the attention she needed,” Daniel Cort, who works alongside his wife, Debbie, with Charles Sampson Real Estate Group of Charter One Realty, explains.

Before adopting Lilyanna in 2012, Daniel was involved in real estate, but not on the home sales side.

He worked for a media firm that helped developers and builders reach their marketing goals, while Debbie worked with WHHI-TV. In 2015, when Debbie was considering getting a real estate license, she and Daniel concluded that the real estate industry would allow them to tag team and create their own schedules—with Lilyanna as the cornerstone—instead of trying to work family time around schedules determined by two different companies.

Hillary, who joined husband, Eric Dollenberg at Weichert Coastal Properties two years ago, echoes this sentiment. “The benefits are that we’re not in two worlds all day and trying to create another world at home. It’s all one universe that we’re moving in, so it makes our relationship and interactions more seamless,”

Before becoming a team, this dynamic duo often went in opposite directions. Eric specialized in extravagant estates, including gated communities, beachfront properties and second homes, and Hillary traveled almost every other week as a national trainer for Obagi Skin Care. When their first son, August Thomas, came along, followed by Frederick Charles “Fritzy” two years later, they knew something had to change.

“We anticipated me staying home a little bit more but the baby dictated that I stay home a lot, so I had to leave my corporate job,” Hillary says.

She mentions how this naturally led to working with Eric on real estate marketing projects, which transitioned into becoming part of the team. “If you’re not going to beat them, then join them,” she says with a laugh.

Allison Cobb’s real estate roots date back to her father’s real estate career circa 1996. However, it wasn’t until she and her husband, David Hussey, moved from the Windy City to the Lowcountry that she dove into the family business.

Allison’s husband David worked in the hospitality industry, and late nights were just part of the deal. But when their kids, George and Charlotte, were born, he hated missing time with them.

“It was a family-driven decision to bring David into business, 100 percent,” Allison says. “I needed more help, the kids missed him, he worked nights and wasn’t seeing them as much.” This decision led to the birth of The Cobb Group, Charter One Realty.

From the first moments they met—Hillary and Eric’s blind date, Allison and David’s first taste working for the same Chicago company and Debbie and Daniel’s faux romance in “The Pajama Game” on May River Theatre’s stage—these Lowcountry lovers were on the cusp of discovering what “partners” really meant.

“There are particular nuances about real estate that are challenging enough. When you throw in the fact that you’re husband and wife, you live together, and add all of the personal and intimate elements into the mix, you’ve got a lot to juggle there,” Daniel Cort admits. “It’s a tremendous balancing act.”

For the Corts, home isn’t just where the heart is, it’s their workplace, too. They soon learned real estate careers can easily became all consuming, and it was vital to step away and get a breath of fresh air every now and then. Although the flexibility of schedules—the ability for them to, in a sense, be their own bosses and make their own schedules—was a huge highlight, it also meant that one of them would have to miss some family functions if they got an important call from a client.

“Sometimes we have a family thing planned and one of us has to bow out because we have a client that needs us—that’s just the nature of the business,” Debbie says, also pointing out that two is better than one, because, as Daniel says, “When one zigs, the other zags.”

By working as a team, they are not only able to play off each other’s strengths.

They fill in the spots where one might not be as robust as the other. Or as Hillary puts it, “I handle everything he doesn’t want to do, and vice versa.”

When meeting new clients, real estate teams are able to paint a picture that individual agents can’t by giving buyers more than one perspective. “Selling as a family gives buyers and agents a two-for-one. They get two people working for them instead of one,” Allison explains. “There is always someone available for questions and showings. Being a family and working for families means we understand especially what buyers are looking for. We understand that schools are important, as well as certain features in a home.”

Real estate couples open up to their clients as they guide them through their journey to the perfect home.

This often results in lasting friendships.

“You spend so much time with people through these processes that almost all of them become our friends,” Hillary reveals, adding that their family even went on a trip with some friends and clients in January.

“The way we look at this is we’re helping folks prosper,” Daniel explains. “We’re the sort of intermediary between what they want and what their dreams are and sometimes those two don’t match up. We like to think of ourselves more as counselors than salespeople.”

It Takes a Village

While Daniel and Debbie Cort, Eric and Hillary Dollenberg, and David Hussey and Allison Cobb may be the locomotives pulling in the business, the team behind them keeps the train on the tracks.

“There’s definitely an army behind us,” Hillary states, adding their success would not be possible without the support of friends, co-workers and even grandparents. “It’s tremendously important and I can’t underscore enough our office support.”

Allison attributes learning the tricks of the trade early to her father’s real estate career, which they both passed on to David when he joined them. Not only did she have incredible business partners—her dad and husband—but also supportive family members who helped with the kids when they had to meet with clients at all hours.

“It’s changed our whole family dynamic and we’re thankful for Charter One Realty and our own team.”

“That we’re able to do that, and for the company for taking us all on,” Allison says.

As “work-linked” couples, it’s the internal support from each other that solidifies and strengthens, according to Merideth Ferguson. He is the lead author of the study, “The supportive spouse at work: Does being work-linked help?”.

This study found couples who share a workplace or occupation had a closeness that benefited their marriage. They may be able to support each other in unique ways. About one-fifth of the 639 men and women recruited for the study had the same job as their spouse. Results from the questionnaires about work-family balance showed that “work-linked” couples had twice as much satisfaction.

“I think that contact throughout the day helps a good deal.”

“If you don’t know what spouse has done all day, it’s difficult to come together in the evening,” Hillary shares. “I’m much more understanding now that I’m a part of it.”

“We meet incredible people from all walks of life, of all ages and make wonderful friends. It’s the most gratifying thing I can think of,” Daniel says. “But to do it with your wife, that’s just icing on the cake.”

Apparently, though, all this working-couple togetherness can get a little sticky. Our couples agreed emphatically about one of the most important secrets to their success.