Search
HomeBlog Article“To the Corners of My Mind”: Memories of a Bluffton Childhood

We all reach an age where we try so hard to remember details of lost memories.

Voices and minds that could have verified truth long gone, leave slightly darkened and dampened remains. Years and faces blend together into hard clay that only softens, perhaps, when a familiar tune plays or a scrap of picture tumbles forth a memory like a sudden landslide.

My childhood is a kaleidoscope of such remembrances, some more real than others, and not a single one too certain to have happened as I recall. I have one loose collection of memories about Daufuskie and Gullah culture that swirls in my head, sweet smelling as fresh tobacco when up close, but the specifics as elusive as the smoke that dissipates so quickly.

The time of year is inconsequential, but I do recall it was green and cool, the air was fresh.

Perhaps it was springtime. As a family, we used to go to Savannah for St. Patrick’s Day; perhaps it was on one of these trips. There is pictorial proof to support my memory; photographs reminiscent of amateur photography in the late 1970s and early 1980s. Children smiling on command, squinting into the sun and lined up along a parade route, women in folding chairs smiling genuinely as they paused in conversation to look.

I recall what a boy would find remarkable and would describe it as a dump truck. In reality, it was my grandfather’s two-ton construction truck, filled with sand. He would park it along the parade route for me and my cousin Shelby to play in during civic parades. He owned a construction company that renovated many of the buildings in old Savannah. Perhaps he parked it along that route to mark his territory or to remind prominent folk he mattered. Maybe it was just for fun. Regardless, that truck is central to many recollections in my mind’s eye. I also remember it on Oyster Street full of debris from what I believe to have been an enormous fallen oak; perhaps the same one that fell on my room, as I am told, as I slept as an infant.

In this mix of memories during that spring-like season, I am reminded of another old two-ton truck.

I was in the bed of it, but not amongst sand and not along a parade route. I was on a wooden bench and so was my grandmother, my father, mother and sisters. My grandmother’s wide framed glasses and dress, her cigarette case and the smell of her hairspray come to mind. I was in her lap, or my mother’s; either way a woman pointed out things of significance to me as we rode.

I recall passing the beach where in the early summer we would picnic and find horseshoe crabs. We looked out over tall grass; there were pine trees and palmettos. Horses were among the trees and the green grass; perhaps three or four. We bumped along as a man’s voice that I don’t recall talked to us, probably explaining what we were seeing. I remember chickens scurrying about as the truck slowed and we rolled into a little village. A large woman, with a wide and happy face came to the back of the truck and helped us out. We walked the village. The resounding memory being the ride in that two-ton truck and the happy and kind voices of people we met in that little place.

What this memory actually represents is a tour of Daufuskie Island.

The memory is of a Gullah community, a recollection of Marsh Tacky horses and Bloody Point beach. It’s certainly an early memory, but one that has been consistent to me over the years. While I am certainly no expert now, the significance of Gullah culture was not truly known to me until I studied the history of the South and that of the Lowcountry region as an older man. My appreciation and understanding today makes me wish my memories of that particular day and the people we encountered were more vivid, but alas it is what I recall. They are happy memories. I believe happy memories positively shape our present worldview and make us different and unique.

In my childhood, the word “Gullah” meant three distinct things and all of them were connected to my grandmother, Isobel. They involved language, food and folklore.

Gullah represented a funny way to talk, especially to a child.

I distinctly remember Isobel, most strikingly, stretching her vocal range into a contralto and saying things like oonman bettuh git dem crabs in da pot or some variation like that, as she went about cooking in the kitchen. What she was doing, I now know, was using Gullah-like phrases interspersed with her English. It was common for her to interject Gullah words into her conversations, usually around things that involved cooking or what I would call “happy talk.” Her distinctive voice is something I can still hear if I reflect long enough.

How she would pronounce water and boat will always be hers, but so too the sweet ways she would mimic Gullah-born terminology. It wasn’t to poke fun or to steal, but it was a natural part of who she was and what she did. I believe that living all her life in proximity to the culture of the Gullah in the South Carolina Lowcountry and the Geechee in Georgia allowed those cultural idiosyncrasies to seep into her being. The phrases or words came out in natural ways that accentuated a point with either humor or certainty. It always marked something joyful, light and happy. I remember Gullah words and phrases as being associated with joy and happiness and, oh my, with food.

The influence of Gullah culture was also represented in the ways my grandmother would talk about cooking.

Isobel was known for her food, with the consumption of it perhaps the most memorable thing for most, but for me I always enjoyed how she would talk to me about creating it. 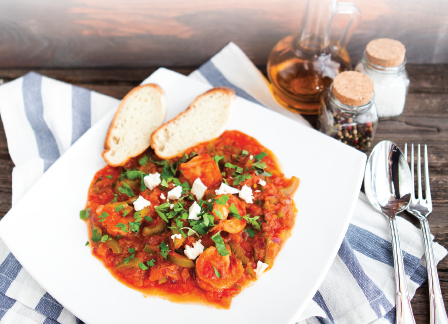 Cooking was a labor of love for her. Gleaning techniques directly from her has always distinguished my own cooking. Some of those techniques have their origins in Gullah traditions. For example, rice was always a big part of her meals and she taught me that when cooking rice, add just enough water to let it cook without having to mess with it. My favorite meal was when she would make her Creole shrimp. The tomato, okra, onion and pepper were left to simmer on the stove until everything was perfectly blended together and soft, almost translucent, before the sweet May River shrimp were added at the end. The whole wonderful mixture was served piping hot over rice. It was her traditional “Welcome to Bluffton” meal, and was served nearly without exception every time we visited her on Oyster Street.

This style, as I have since read in cookbooks, is distinctly derived from Gullah/Geechee sea island communities.

Meals were a focal point of family life with Isobel; her daylong preparation and cooking, the fellowship of the meal and then the ritual of great conversations after the food was eaten. Some were longwinded and ended without resolution at the bottom of a rabbit hole, others offered unsolicited advice, but the funniest and most enjoyable were stories from the past; be it truth or folklore. The best folklore involved Bruh Rabbit and Sister Queen Hester.

The stories Isobel would tell about Bruh Rabbit and Sister Queen Hester, among other boo hags and tricksters, were tales spun long ago and handed down to her while she was a youth. There was a central theme that usually included an ailment that had befallen some poor soul. The afflicted would search out the dokta, but somehow end up in the midst of a plot or game between Hester and Bruh Rabbit. The tales were tall and always involved a twist or a hilarious punch line. They were never mean-spirited or sinister, but light-hearted in nature. They always reminded me of the cartoon classic “Tom & Jerry” where the cat and mouse mercilessly tease and chase one another around the house, causing all sorts of havoc and mischief.

We spent many a night howling in laughter as my grandmother would spin these yarns with great joy.

I see her face now illuminated by candlelight.She holds a napkin over her head to represent the kerchief of Hester. Her arms raised in anticipation of the punchline. These tales evolved and took on lives of their own after many years. But, they all originate in the culture of the coast.

I imagine those Gullah families also gathered after a hearty meal to conjure up a tall tale based on these same types of characters and probably, I would imagine, told them in similar fashion to their own family and friends. The richest and most entertaining of the characters and stories being passed down along the generations and even jumping off the islands and into the oral traditions of families like mine. Gullah is much more pervasive in general culture than one might think.

As memories stretch longitudinally down the line of generations, certain details fall to the wayside.

Certainly, a cultural expert on Gullah might take exception to some of what I recall or how I remember details. Someone else might be more technically accurate in historical terms. But, my memories aren’t as much about accuracy, as they are about influence.

My grandmother was wonderful and a strong influence on me. Her voice, her look and her mannerisms still resonate deeply in my memory. The ways she unwittingly introduced me to things that are of Gullah origin have great meaning to me. I am influenced by my grandmother, who was influenced by the traditions of the Gullah-Geechee. That hand-me-down style of influence dominates my preferred styles of cooking and how I serve a meal.

These sweet memories are some of the oldest I have.

They are rooted in a grandmother who instilled a sense of ingenuity, perseverance, joy and family into me. I am no expert, but I have read these are all distinctive characteristics of the Gullah people, as well.