Search
HomeBlog ArticleBeautiful Bluffton: A Reflection of Bluffton by the Late Andrew Peeples.

No place its size in South Carolina has inspired more praise from famous boosters than the quiet, restful little Bluffton. 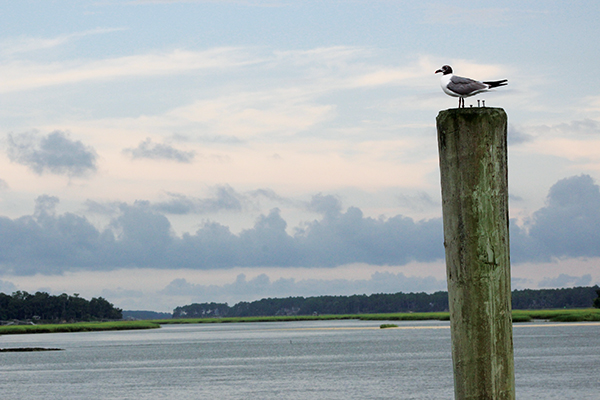 It is located, not on a noisy railroad, not on a busy highway, but on the “most beautiful estuary in all the world.”

The quote is from Thoughts by Blufftonians.

Men of great wealth and culture settled here, such as Cornelius Vanderbilt and his brother-in-law, Richard T. Wilson Jr. They could have built their palatial winter homes anywhere on earth. They chose the unmatched charms of Bluffton for the view from their spacious verandahs across that “beautiful estuary.”

Dr. James Mellichamp, the beloved physician and botanist, lived and worked in Bluffton.

He collected and classified local plant life. He attracted the attention of the world’s greatest biologists to the unusual variety of flora in the vicinity.

The distinguished historian, James Henry Rice Jr., spent many happy hours in Bluffton. He gathered material for his unexcelled book on The Glories of The Carolina Coast. He poetically praised the wonders of the South Carolina Lowcountry—particularly in and around Bluffton. Critics all over the nation voiced his the sentiment. Some said “every private and public library, every home, school and college should have a copy of this fascinating book.”

Picturesqueness and variety, which characterize the lower coast, Rice said, “reach perfection at Bluffton on the River May.”

“All the country, indeed, from North Edisto to Savannah, exhibits the same richness and variety in its flora. The same can be said of the opulence in its fauna, save for regrettable waste places here and there. But, at Bluffton, the live oaks grow larger and more symmetrical in the unfolding of their mighty crowns. The limbspread is enormous. One limb measured recently 84 feet, 2 inches.”

Rice goes on to say that “white cottages nestle beneath the live oaks, each with its clean-swept yard, bordered with evergreen, among which the Sabal palmetto and the Magnolia grandiflora are conspicuous, though the azaleas and the Camellia japonicas may not be slighted with their shy and impelling lure.”

Then, with true insight, he observes that Bluffton “retains enough flavor of old days to let one know he is within the pale, surrounded by the purple-born, who, through storm and stress, war and misfortune, have clung tenaciously to their birthright. Only on Edisto and along the Pon Pon does one get so fragrant an aroma of our Golden Prime.”

Clinging to their birthrights is a perfectly natural habit for proud Blufftonians.

When asked his name, one little Bluffton boy, descendant of an illustrious patriot who affixed his signature to the famous document of 1776, straightened to his full height and replied: “Sir, my name is Thomas Declaration of Independence Heyward.”

Along about the same time that historian Rice was jotting down his loving lines, another distinguished author, Marie Conway Oemler of Savannah, become completely captivated by Bluffton. Her fictional works, Appleboro and Riverton, glorified the town. She pushed her prolific pen and completed two exciting novels about the town. What she saw and felt and even smelled in Bluffton gave expression in her books. Unfortunately, her books been long out of print.

Unlike some of the present-day bluff dwellers, Marie Conway Oemler had no quips for the odors from a Bluffton crab plant.

She was concerned only with “smells that came from over the cove, of pine trees, and sassafras, and bays, and that indescribable and clear odor which the winds bring out of the woods.” Nor was that charming and talented lady bothered with outboards whining up and down the river while she was taking her afternoon nap.

To her artist’s ears, the “whole place was full of pleasant noises, dear and familiar sounds of water running seaward or surging back landward, always with odd gurglings and chucklings and small sucking noises, and runs and rushes; and the myriad rustlings of the huge live oaks hung with long gray moss; and the sycamores frou-frouing like ladies’ dresses; the palmettos rattled and clashed, with a sound like rain; the pines swayed one to another, and only in wild weather did they speak loudly, and then their voices were very high and airy.”

As for a July morning in Bluffton, it was “always beautiful, was at its best.

The elder was white with flowers, and in moist places, where the ditches dipped, huge cattails swayed to the light wind. Roses rioted in every garden; when one passed the little houses of the Negroes every yard was gay with pink crape myrtle and white and lilac Rose of Sharon trees. All along the worm fences the vetches and the butterfly-pea trailed their purple; everywhere the horse-nettle showed its lovely milk-white stars, and the orange-red milkweed invited all the butterflies of South Carolina to come dine at her table.”

At night in Bluffton, a little boy dreamt of the purple heights. He slipped out of his room into a “big, white enchanted world. He saw things only an imaginative and beauty-loving boy in the light of the midsummer moon could. Big hawk-moths, swift and sudden, darted by him with owl-like wings. Mockingbirds broke into silvery, irrepressible singing, and water-birds croaked and rustled in the cove, where the tidewater lipped the land.

“The slim, black pine trees nodded and bent to one another, with the moon looking over their shoulders.

Something wild and sweet and secret invaded the little boy’s spirit, and stayed on in his heart. Maybe it was the heart-shaking call of the whippoorwill. Maybe it was the song of the mockingbird, truest voices of the summer night. Perhaps it was the spirit of the great green Luna moth, loveliest of all the daughters of the dark.”

No matter by what name it was called, whether “Kirk’s Bluff,” as in the beginning; or “Appleboro” or “Riverton”; or even the French “Bellefount,” as it was called in Margaret Fuller’s One World At A Time—a delightful novel about a little girl in the latter years of the nineteenth century—Bluffton’s unsurpassed charms always evoked inspired boosts.

As far back as 1562, more than two centuries before the planters of St. Luke’s parish began building summer cottages on the high bluff overlooking the “most beautiful estuary in all the world,” a famous traveler from across the sea sailed his vessel into the cool shadows of the tall pines along the shoreline and dropped anchor.

How long Jean Ribault remained there admiring the New World’s Garden of Eden, which some 250 later would be called Bluffton, history has not recorded. But this much is known; he did not weigh anchor until he had taken one long last look at Bluffton’s beautiful river and proclaimed it for all future generations, “La Belle Riviere de Mai!”