He holds several honors, including 1967 Artist of the Year by the Artist’s Guild of New York and a gold medal for lifetime achievement by The Portrait Society of America in 2014. 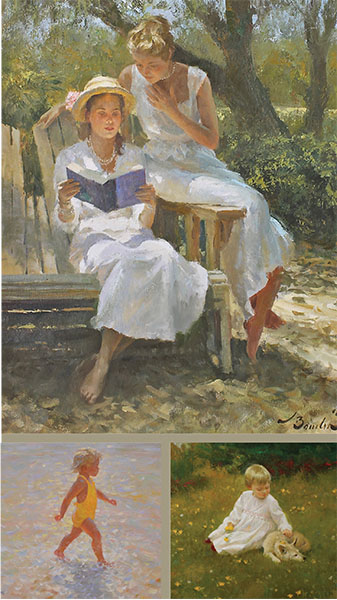 Joe was born in Forest Hills, New York, in 1928 with the natural ability to draw. At the age of 17, he started hislifelong career as an artist. He went to work at Cooper Studios as an apprentice His first illustration sold to and published in Cosmopolitan at age 19. Working at Cooper’s, he had the opportunity to learn the craft from some of the finest illustrators and artists in the profession.

Joe had the good fortune to meet, and then marry, Marilyn C. Crang in 1950.

They met in the summer of 1948 while Marilyn was studying at Parsons School of Design. Marilyn was not only his wife and the mother of their two daughters, Jolyn Louise and Bevan Brynne; she was an integral part of his business.

In 1958, Joe developed with polio, which left him almost completely paralyzed. Brought home after a month, he began the hard work of recuperation with the help of an outstanding physical therapist with whom he worked for the next seven years. Within three months he completed an illustration for the Saturday Evening Post and continued his success as an illustrator through the ‘60s.

Seeking a warmer climate, Joe and Marilyn moved to Hilton Head Island in 1972. This proved to be the ideal location in which to make the transition from illustration to portraiture. Joe had made the conscious choice to paint in a traditional manner and consequently he sought inspiration and expansion of his knowledge as a painter by studying the great masters, including John Singer Sargent, Joaquin Sorolla and Anders Zorn.

With the move to Hilton Head,  Marilyn became Joe’s representative.

This included contacting clients, public relations, protecting his painting time and setting up and executing portrait shoots. She was also his fairest and most trusted critic. Marilyn died in March of 2008.

“Obtaining a likeness is no great problem for me. Creating a beautiful painting to which anyone can respond. Even if they don’t know the subject, this is the challenge,” Joe explained. “I get inspirestion by the great painters of the 19th and early 20th centuries. Constantly, I return to my library to look at the superb work of the European, Russian and American artists.”

Joe continues to paint, and even after almost 70 years as a working artist, he still strives for improvement.