Have you ever thought about how Bluffton was built in the late 1800s and early 1900s?

Original growth longleaf pine and cypress was readily available, cut down and dragged out of the woods, milled by steam-driven saws, loaded onto steamships that delivered the material to our docks, or carried on wooden wagons pulled by mules to the site. Tabby or brick foundations made by men who learned from their fathers, who had learned from their fathers (many of them former slaves), who passed down the craft to the next generation to continue their trade. Roofing shingles, siding, cabinets and trim were made locally or onsite; the moldings shaped by hand planes. The scaffolding to get to the second floor was made onsite from split rails, lashed together and a lift was devised with block and tackle to pull lumber and flooring to the upper floors. 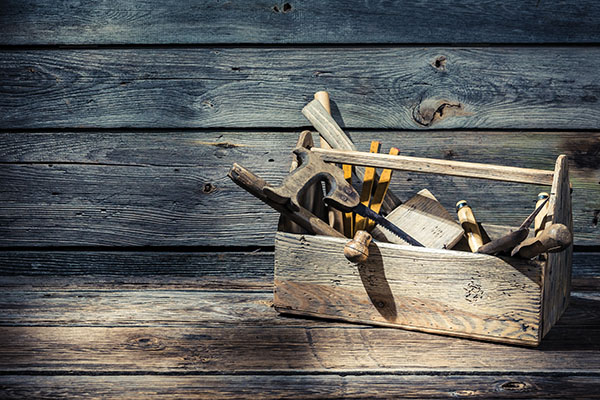 Each element was made by true craftsmen and their apprentices, each of them specializing in a specific trade—some masters with multiple skills. Hand saws, block planes, hand chisels and augers were specialized tools of the day. No electricity, no power tools, no plywood, no air compressors and no nail guns. As time went on, technology started to take the place of craftsmanship.

Craftsmanship is not necessarily a skill, but an attitude and passion to do things right. It is not just found in carpentry, but also in pottery, cooking, music, surgery or shrimp net weaving.

A craftsman loves what he does and pours his heart and experience into his acquired, learned or self-taught skill. Craftsmen walk in the footsteps of those who came before, tirelessly searching for perfection, and generously passing on their knowledge to those who work alongside them.

A master carpenter is known for his tools: clean and sharp with patina on the handle that only comes from the sweat and oils of toiling hands and hours of labor. A rusty tool is no good at all. Yes, craftsmanship can be taught now in trade schools, but cannot be accomplished without years of experience. It is a way of life, requires pride in the accomplishments of each day, and is admired by fellow tradesmen and townsfolk. 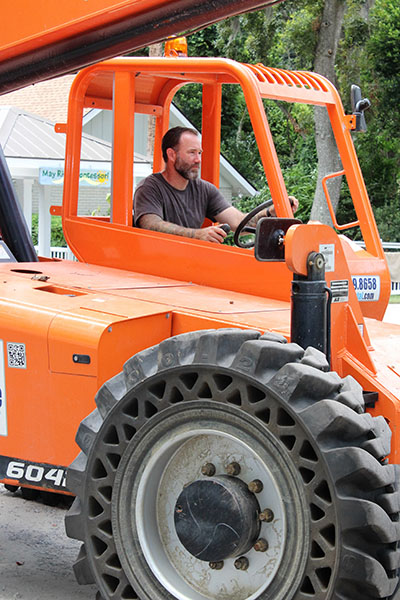 With the boom in construction in Bluffton, there are thousands of laborers and tradesman; but only a few dozen true craftsmen.

David Abney moved to Old Town 10 years ago and has made a valuable impact on the future of our little town.

A third-generation contractor, Abney was schooled on the Island and began learning the remodeling trade. He later moved to Charleston, where he worked with his hands and mind on numerous restoration, remodeling, new commercial and residential projects, perfecting the many trades needed to be a complete builder. Along the way, he gained experience and developed the true ethic, passion and experience of a craftsman. David and his wife Kristy knew they wanted to raise their children in Bluffton and build his business doing what he loves, in the place he loves.

Visit Chris Shoemaker’s new May River Excursions building on Calhoun Street and you will begin to understand. 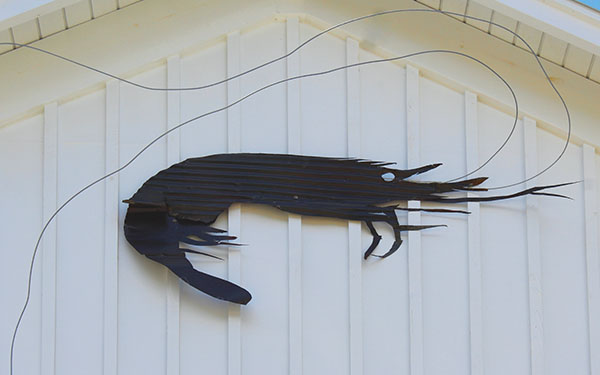 Designed by Pearce Scott, attention was given to each cut and placement of nails on the two-story, board and batten building. Inside, you walk on a stained concrete floor and see the simple trim, wood walls and ceiling painted in fun bright colors. But that is not all. The countertops and furniture, supplied by Hank Carroll, are made of 2-1/2” cedar with natural edges and gloss finish by Bluffton craftsman and artist D.P. Giltner, who also created the table displays of painted plywood and the iconic three-dimensional shrimp mounted on the side gable.

When May River Montessori School called, David came running, and not just because his children will go there. 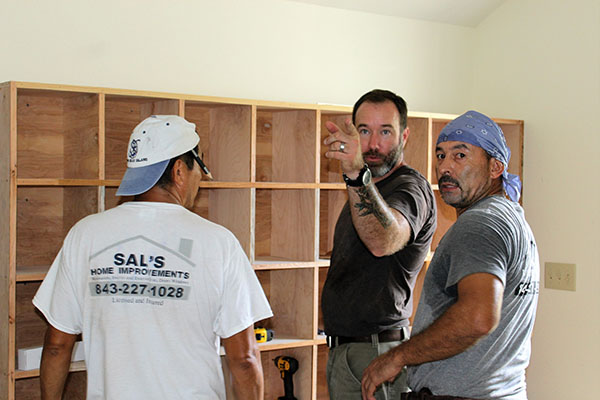 Adding a second floor and remodeling the old Hargray Building on Calhoun and Bridge streets had a time restraint, if it was to be completed in time for school opening—and not without surprises (remodeling always is). One good discovery was that the roof deck of the old building had T&G pine decking and timbers. This treasure was milled and repurposed into post trim, window and door trim, crown molding, shoe cubbies, tables, benches and shelving.

When Chierie Smith stopped by to get a few shots, she found carpenters milling old pine outside, metal workers welding and painters carefully applying the last coats of varnish and paint. As any great craftsman does, all surfaces and floors of finished work were covered and protected to prevent any damage. The school is now open.

Getting an early peek at Calhoun’s in the Promenade was another treat. 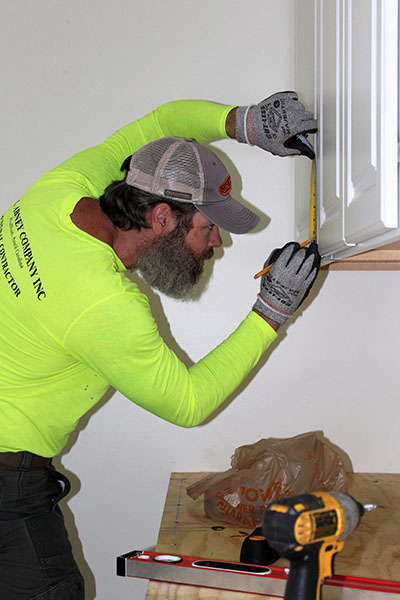 Attention to detail was everywhere you looked. With a mix of contemporary industrial and vernacular styling, one can say the craftsmen here included not just the carpenters who built the recycled wainscot and tobacco barn pine bar top with corrugated aluminum face, but those who built the exposed metal AC duct system, the white diagonal wall tile and subway tile and stainless steel fixtures and surfaces in the semi-open kitchen—all placed with precision.

A list of other craftsmen who worked here must also include the interior designer and owner for their choice of colors, textures and fabrics, as well as the upholstery and tailored banquette running the entire length of the wall. The outdoor terrace and bar with 35 seats will be enjoyed this coming fall and spring. The details were done correctly everywhere you look. Let’s not forget to mention another craftsman, Chef Darren Macioszek. When designing a restaurant, you start with the menu, and it looks yummy!

Abney is not finished yet.

The Farm on May River Road is another iconic building, designed by Michael Vaccaro. We admire the sound block and sand-finished stucco building with arched portico and the doors and windows made onsite from reclaimed oak. The restaurant will feature an open kitchen with the interior detailing of mixed recycled oak, beech and pine, supplied and installed by Tom Banach, another craftsman, and his apprentices. The passion of the general contractor passes down to each subcontractor. This building will be part of Old Town into the next century.

Just down May River Road in Stock Farm, you will find Guilford Place Cottages, six Lowcountry homes currently under construction. The developer selected Pearce Scott to design them and D.H. Abney Company to build them. Each one is unique with Lowcountry details. Half are sold even though the roofs are not on. There is a reason for this! The builder selects the subcontractors and suppliers who believe in his philosophy of craftsmanship. But, stay turned, David will have lots more to come in the future.

Now it must be said that there are many craftsmen who came before us to make the buildings that are still here, and other craftsmen whose work today can only be respected. The buildings and homes being built today—from Old Town to Colleton River to Palmetto Bluff—will become symbols of our history and heritage in the future, thanks to craftsmen like David Abney.