Walking around Old Town Bluffton, you might catch a glimpse of a man out of place—or rather, time.

Dressed in 19th-century clothing with a big straw hat and toting a canteen, this man is none other than Bluffton Jack, leading one of his Old Town Tours on a journey through history.

Jack, whose real name is Rodney Vaughn, has been a resident of the Lowcountry for nearly 10 years and has been a part of the community since he first set foot in Bluffton.

“When I moved to town, I really took a vested interest in the community,” Vaughn said.

Apart from being a current member and past president of The Old Town Bluffton Merchant’s Society, Vaughn is a former Bluffton Rotarian and an involved community activist. He’s also the co-founder and current producer of Coastal Stage Productions, a regionally touring theatre company based in Ridgeland, SC.

Before he became Bluffton Jack, Vaughn would walk his own friends and family through Old
Town and share some of its history.

“I would just show them around a bit, and then one of them said, ‘You’re really good at this! You should charge people for this and make a living off it!’” Vaughn said.

From there, he dove into Bluffton’s history, interviewing historians at the Bluffton Historical society and longtime residents.

The result of his research: an educational and entertaining arsenal of facts and folklore. And who better to tell the tales than a character who could have lived through them?

“It’s a great marriage between the theatre company we own and history,” Vaughn explained. “Jack was born in 1800s Bluffton, and he’s a colorful, charismatic individual.”

The blend of fact and local legend keeps the tour from feeling like a dry history lesson, Vaughn said, but he doesn’t make up stories to keep people entertained. He is a licensed tour guide endorsed by the Bluffton Historical Society. His tours weave true historic accounts with “fun, intimate stories about the people” who lived along the path of the tour—places such as the Pine House, Seven Oaks and the Peeples Store.
“The facts that you learn are the straight facts,” Vaughn said, “and the folklore is the stories passed down through the people.”

Vaughn thought he would see more visitors to Bluffton on his tours, but he was surprised to find most of his guests are new residents. He said they might not have moved to the Lowcountry for the history, but they, like Vaughn, want to know more about the place they now call home.

“It’s been fun to learn the history of not just Bluffton,” he said, “but of how Bluffton helped shape the South.”

“It’s great to meet so many people and share the stories of Bluffton,” Vaughn added, and the increase of newcomers to the area drives his dedication to preserving and sharing the town’s storied past. “I don’t want Bluffton to lose that charm and that history.” 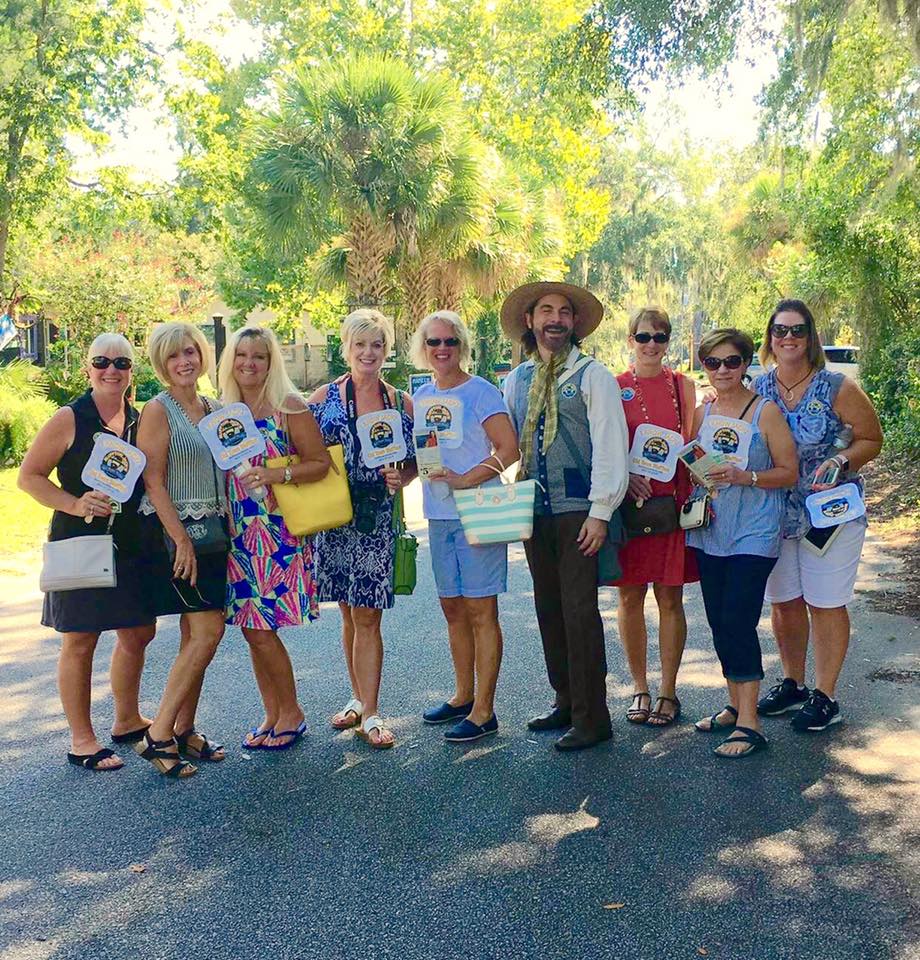 By day, Bluffton Jack’s Old Town Tour includes 20 featured stops along tree-canopied streets and pathways. At night, Bluffton Jack’s Haunted History Tour features about a dozen stops and the spookier side of town. You won’t just see the antebellum porches at Seven Oaks; you’ll hear about the old murder that once drew ghost hunters to the area. And who knows? Around the Peeples Store, you might still hear the late Luke Peeples playing his piano.

But don’t worry about scaring the little ones; the Haunted History Tour is a blend of scary and funny that is suitable for everyone 9 years of age and older. Just be sure to bring your own flashlight and wear comfortable walking shoes!

Visit blufftonjacktours.com or call 843-717-2175 to book your guided tour and purchase tickets.