Surveying the horizon and tide table it became clear a river party should be organized. 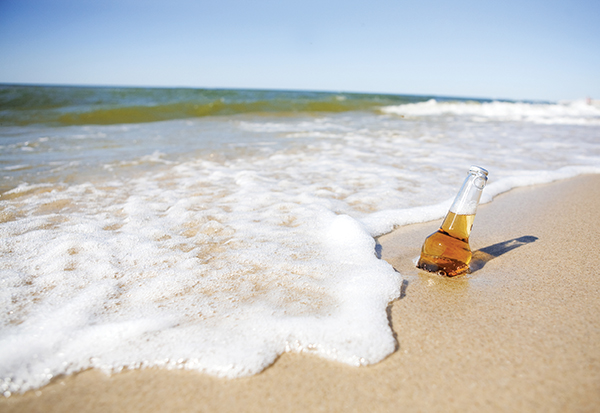 The tide was high and about to turn and, with nary a cloud in the sky, conditions were perfect for a party day on the water. The necessary preparations were made and by noon a lively crowd of neighbors and friends were gathered on the dock.

The crowd was a blend of youth and age, size and shape. The college guys stood tall and tanned in their aviator glasses while the younger teenage boys sulked in their shadows full of big teeth awkwardness and unsculpted baby fat. Girls of all ages milled about in their swimsuits or cover-ups. You could tell the generation gap by the amount of cotton covering their rear end.

They all smelled of coconuts and island fruits and wore oversized sunglasses, each carrying the latest trash novel or fashion magazine in a large over-decorated shoulder bag. The men looked the most relaxed. Perhaps it was the Bloody Marys or the fact that none worried about how they looked in their suits. Either way, they stood at the edge of the dock inspecting some random object in the water. Most had bellies that flopped over the elastic band holding up their suit; most seemed not to care.

The group was a sight to behold.

The men moored an old bateau to a small wooden barge, loaded it with coolers of beer, a small charcoal grill, crab lines and a picnic basket and headed across the river for a lazy afternoon. If lucky, they would catch a tan, a buzz and a bushel of crab. Cousin Shelby acted as master of ceremonies of the party. He stood in the bow and christened the leaky contraption the “May River Queen” and with a plume of smoke from the motor, they were underway.

The sun burned white in the deep, cloudless sky as the May River Queen crept upriver. The day was hot, but not oppressively humid. The water was cool as people jumped to swim beside the slow-moving flotilla.

Everyone was in high spirits.

River parties were both fluid and leisurely, an excuse to get out but not enough activity to warrant use of the mind. The small 35-horsepower motor struggled to push the heavy load against the opposing tide. The pace was slow and the strain of the engine’s hum hypnotic, perfect for catching rays on a hot summer day.

A tattered, red and white striped umbrella flapped in the wind casted a shifting band of shade as it rocked in its rusted perch. It offered the only protection for the smaller children as they huddled together out of the sun. The ladies lay on brightly colored towels, golden skin oiled and Ray Bans. Their tongues wagged with the latest gossip. The slander dripped like honey from the hive.

“Oooh, have you heard what that Miller boy did last week; bless his heart.

I bet he never saw her coming,” cooed one particularly knowledgeable matron from beneath her oversized hat and over-painted red lips.

A small radio tuned in the classic sound of 1960’s Motown, Philadelphia and Memphis, drowning out most of the conversation radiating from the girls’ side of the barge. The men gathered by the motor and smoked cigars and drank beer, talking of football and fishing.

“Aw, heck, Dooley will have them ready; ready to lose to Pat Dye’s Tigers that is,” mocked Doctor Norton, a physician from Atlanta who loved to razz Georgia football fans.

The party barge cleared Bull Creek and continued its way up the May River to Potato Island.

There the anchor was tossed on an emerging sliver of sand and several ladies who preferred the tidal sandbar and Danielle Steel to crabbing on the crowded barge were offloaded. The children scattered about like fiddler crabs on a hot dock. They yelped and screeched among the adult’s legs as coolers were taken ashore.

With half the crew comfortably settled on the sandbar, the May River Queen continued its journey to the mouth of a narrow creek just out of sight of the river’s boat traffic.

The children watched with reserved curiosity as stinking chicken necks and thighs were pulled from the reeking bait cooler, fastened to metal pins, then carefully dropped overboard. Each child scrunched up their nose. They let out a collective “peee-eww” as the grease from the chicken collected on the water’s surface. Not much beats the spectacle of hand-line crabbing.

So, with lines left to chum in the water, the women resumed tanning and the men cracked another cold beer waiting for the crabs to bite.

Patience is essential for hand-crabbing, almost as much as watching the water boil when you cook them. You have to let the greedy crab come feast on the meat, and become gluttonous to the point it will risk its life to hang on to the rancid piece of chicken. With the bait taken, the prize was then retrieved by gently reeling in “the blue” until a net grabbed the enraged, but helpless, greedy crab. The blue crabs were then deposited in a tall peach basket and the process repeated until the basket was full. 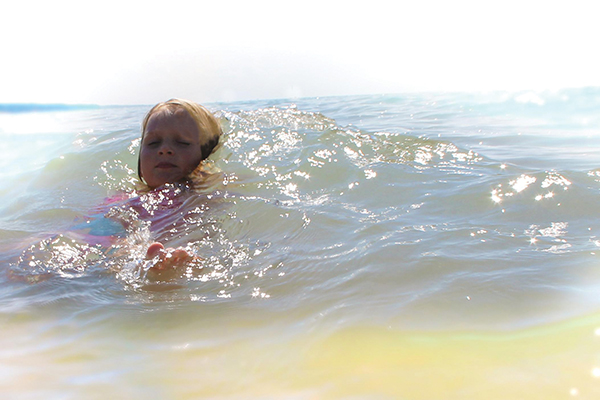 This was the typical process until one of three things occurred—one, the tide changed and the run of crab stopped; two, the girls got too sunburned to remain; three, the beer ran out. Yes, life on the river can spoil a lazy man. However, this afternoon there happened to be a fourth element. When the visiting preacher’s youngest daughter found a way to sit in the bucket of angry crabs, it was time to call it a day and head back to the sandbar.

By the time tears were subdued, lines pulled in and the barge set back in motion, the tide had turned.

Upon reaching the sandbar, we found the incoming waters had already split the exposed sand in half. The others in the party hardly noticed. They sat in chairs waist deep, wallowing in the warm summer currents.

“What’s to eat?” called Kathy from her chair in the water. “We’re half-starved, fire up that grill!”

And so, with less than 25 minute’s worth of dry land remaining, the men set out to fire up the hibachi. Apparently, the sun and fun impaired their ability to master flame. It took a ring of women holding towels around the little hibachi to produce any hope for cooked food.

The tide rushed in closer and closer to the small band.

After some quick maneuvering, the last chair and child were loaded on the barge. The sun dipped into the horizon. Shelby waded through the waist-deep water with a platter of burgers. The crew now sat sunburned and happy with feet dangling in the water. The May River Queen began its methodical push back to the home dock after a glorious day on the May. New memories forged by the changing of the tide.