Search
HomeBlog ArticleA Philistine’s Guide to the Sport of Kings 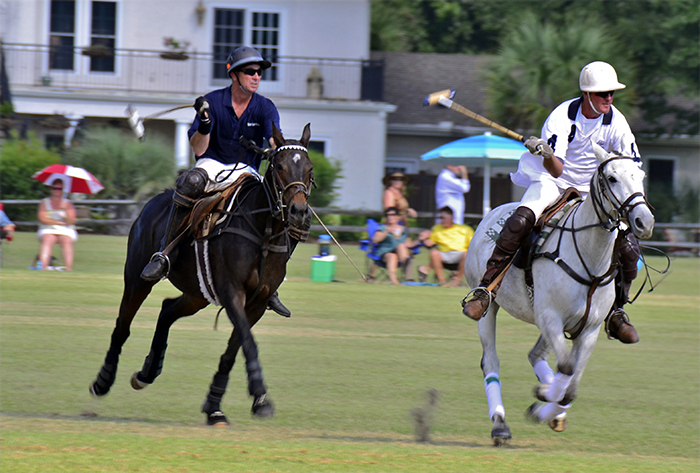 Polo is fast, rough and it’s considered to be one of the most dangerous sports in the world. It even sounds dangerous. For example, the offense is referred to as “The Attack.” The first historical references of the game, earlier than 600 BC, suggest that nomads in Central Asia played a version of polo as battle training. I shudder to think what they might have used instead of mallets and balls – hatchets and heads? As the centuries galloped along, polo was played mostly by noblemen, hence the moniker, “Sport of Kings.”

What is it like to play polo? Imagine a ball, similar in size and weight to a billiard ball, hurtling at 100 mph towards you. Your job is to maneuver atop a snorting, 1,000-pound behemoth, staying at a gallop of 20 to 30 mph, then passing the ball to your teammate or carrying it down the field for a goal – all while another 7,000 pounds of horses and riders are chasing you. There’s no clubhouse at the halfway point where you can get a cold beer or an Arnold Palmer. In other words, it’s not a game for the timid.

As an animal rights ‘enthusiast,’ I went digging for stories of mistreatment, so I could rally with righteous indignation against the sport. I summarily learned that polo ponies are some of the best-treated animals – not just in sports – but also in modern society. Abuse or neglect would be detrimental to the players, who entrust their lives to their horses every time they ride onto the field. Polo ponies run the equivalent of one to two miles during a seven-and-a-half-minute period of play, so they are rested frequently.

What about the shaved manes and braided tails?

“Looks pretty kinky,” I thought. Turns out that a free flowing mane and tail would increase the likelihood of becoming entangled with players’ mallets or the reins. Consequently, the horses manes are shaved to prevent entanglement. Wrapping and braiding the tail is also a safety precaution, and replaced the practice of amputating the tail long ago. Even their travel trailers are nice – nicer than my first car – and their stables are cleaner than my first apartment. Looks like it’s the polo ponies that are laughing now.

And exactly why are they called “ponies” when they are obviously full sized equines? Originally, no horse higher than 54 inches was allowed, so the horses were technically “pony” sized. Today, there is no size limit. An ideal polo pony combines speed, agility, temperament, and intelligence. Polo players quickly acknowledge that a good pony contributes 50 to 80 percent of the team’s abilities.

Chukkers, Hooking and Ride-Offs, Oh My!

Polo has a curious vocabulary and intriguing traditions. The game’s vernacular includes “bump, throw-in, ride-off and hooking.” There are six timed periods called “chukkers,” and after the third chukker, spectators go onto the field to participate in a social tradition of “divot stomping.” During the match, the horses tear up patches of grass and dirt, creating divots that can later cause injury to players and ponies. Spectators make a party out of “stomping” the divots back in place during halftime – sometimes to music! For many, it’s one of the more festive parts of the day. The halftime event that easily surpasses football’s celebrity lip-syncing and wardrobe malfunctions.

After the match, spectators, players and sponsors gather on the field to congratulate the winners and enjoy the ceremonial sabrage or “Sabre a Champagne.” Sabrage is the act of opening a bottle of Champagne by using a small sword – which only reinforces the notion that polo is the world’s most dangerous sport. Granted, any sport that combines swordplay and booze would motivate me to change the channel from “Antiques Roadshow.”

An Equal Opportunity Game, unless you’re a Lefty

Men and women can play polo, even against each other in the same match, and it didn’t take a Supreme Court ruling to make it happen! While making a giant leap forward for gender equality, the sport emphatically discriminates against left-handed players. They don’t care if you write left-handed, just don’t bring that deviant behavior on the field! Left-handed play was officially banned from polo in the mid-1930s for safety reasons, but the restriction was relaxed after World War II when polo players of any persuasion were scarce. The lefty ban was reinstated in 1974 and it’s still in effect today. Think about it like this: you’re driving down the road when a truck comes careening at you in the same lane. The panic you’d feel is exactly what a right-handed polo player feels when he and a lefty approach the same ball from opposite directions.

The Okatie Rotary Polo for Charity event is a casual day of fun for the whole family, with a tradition for some spectators to wear creative or outlandish attire, providing as much to look at off the field as on. The players, however, will be in traditional togs, which include white pants (even after Labor Day – gasp). Like many polo traditions, this one can be traced back to India. While competing in the intense heat, players preferred clothing that was light in weight and color. A modern day fashion essential, the button-down collar, was developed specifically for polo players. This style kept their collar tabs from flapping in their faces during the game. Polo has the perception of being stuffy and buttoned down. The charity event at Rose Hill Plantation is far more relaxed, and has that “Lowcountry state of mind.”

When you go, r dress for a day of outdoor comfort, and not high fashion. Don’t forget to accessorize with picnic blankets, folding chairs and your favorite foods and beverages. There are prizes given for the best hats and most creative picnic. Think of it as “civilized tailgating with prizes.”

It didn’t take me long to realize that my narrow misconceptions of polo were unfair. Polo is rich with tradition. The social aspects are intriguing. This particular polo event is just plain FUN and worth checking out with my friends. You don’t have to understand the rules or history of the “Sport of Kings” to be a part of the tradition. Besides, you can always DVR “Antiques Roadshow.”